Less than a decade after the Bill of Rights was passed and freedom of speech and of the press was guaranteed, Congress passed a series of laws that severely limited that right. During a stressful time of a quasi-war with France and the birth of the two-party system, the party in power (the Federalists) created the Alien and Sedition acts to limit the political power of their rival (the Democratic-Republicans or Jeffersonians, among other names). To do this, the Federalists toughened the naturalization requirements, gave power to deport enemy immigrants, and made it illegal to write, print, utter or publish anything that was false, scandalous, and malicious against the government.

The following case, United States v. William Durell, involves the printing of such an essay. The defendant, who was a printer from Mount Pleasant, New York, printed an "Answer To The Youths of Philadelphia" comparing President John Adams to the traitor Benedict Arnold. 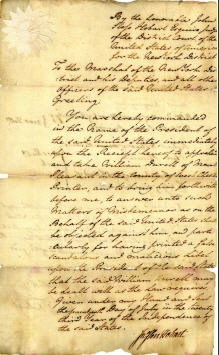