U.S. Recognition of the State of Israel

At midnight on May 14, 1948, the Provisional Government of Israel proclaimed a new State of Israel. On that same date, the United States, in the person of President Truman, recognized the provisional Jewish government as the de facto authority of the Jewish state (de jure recognition was extended on January 31, 1949). Read more... 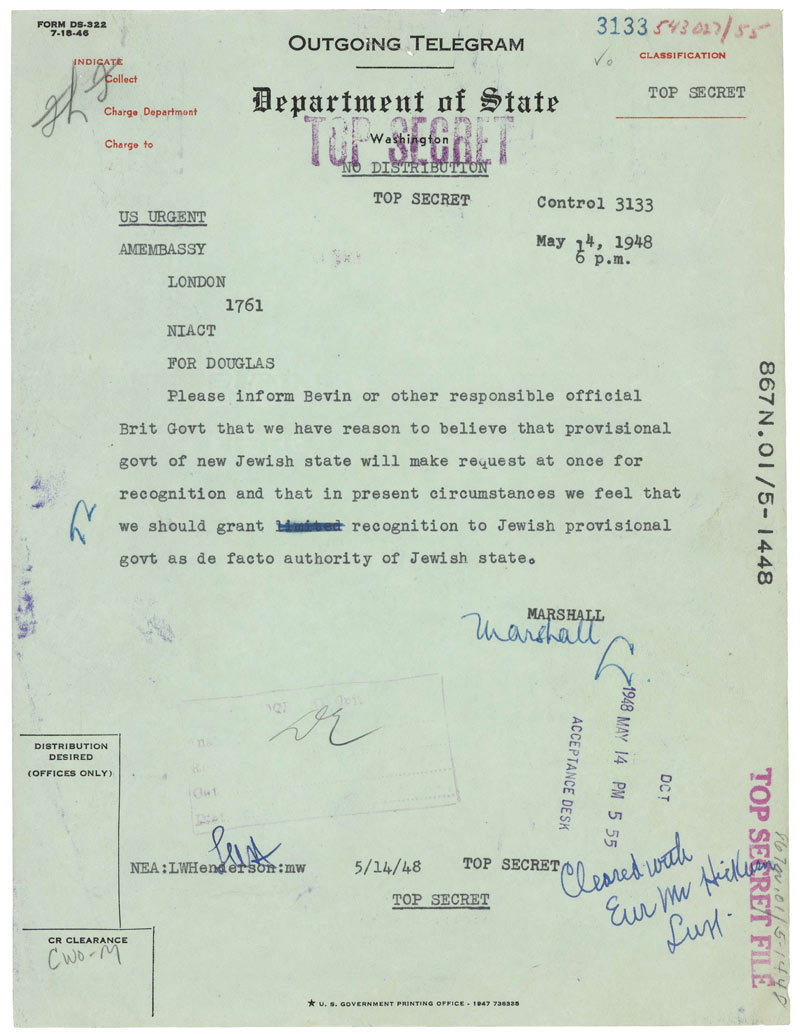 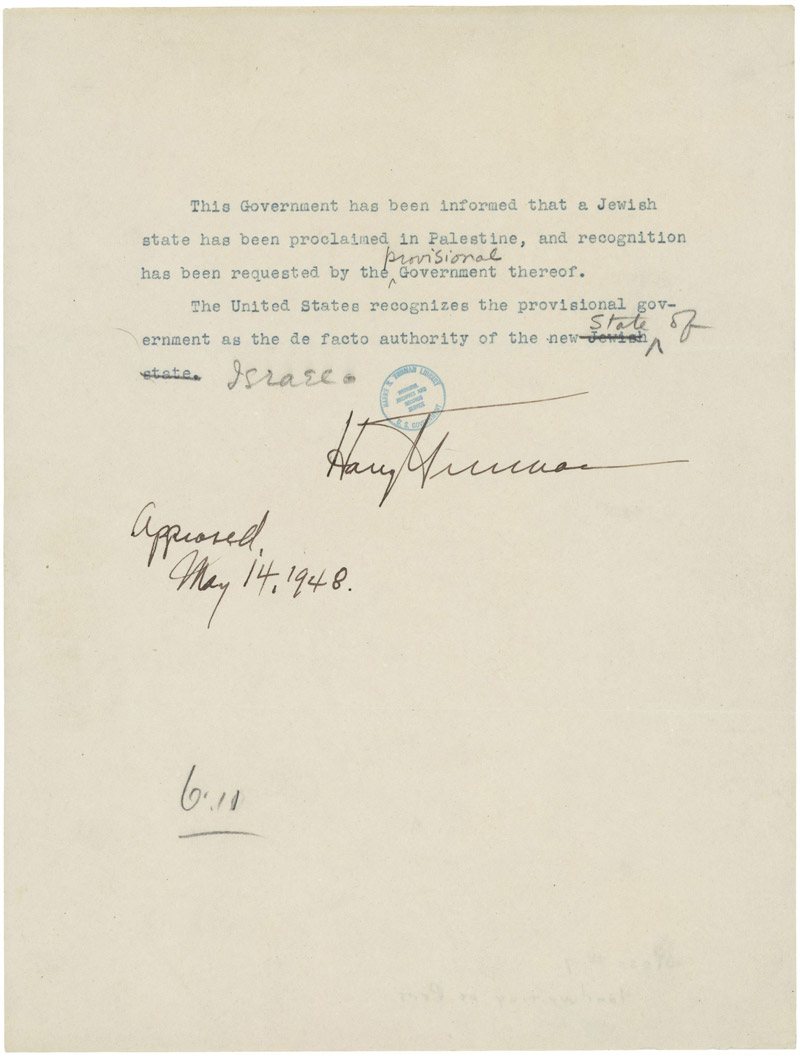 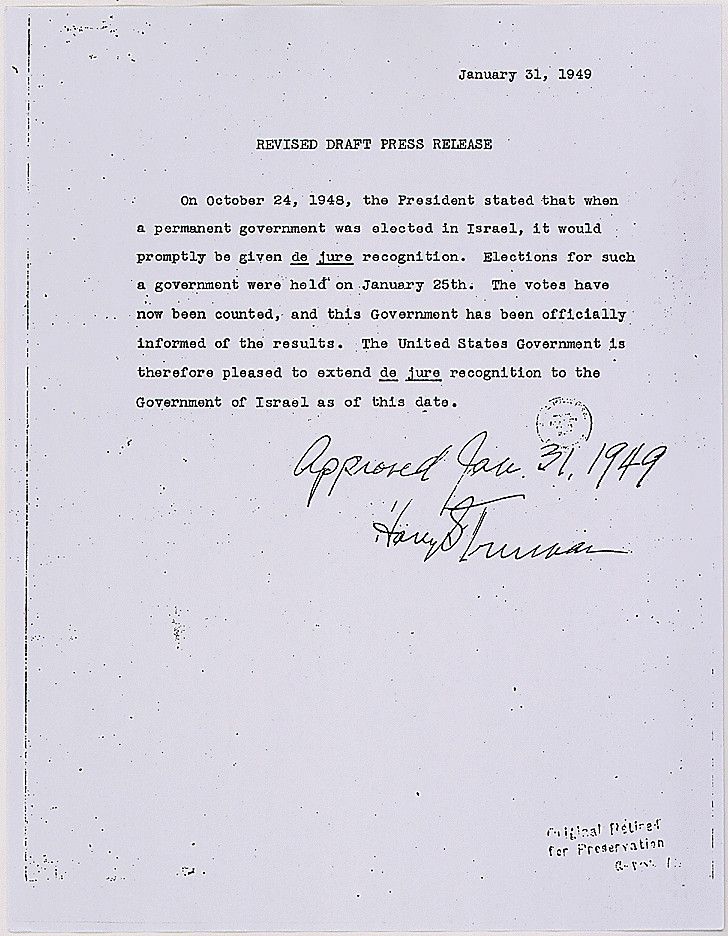 In 1917 Chaim Weizmann, scientist, statesperson, and supporter of the effort to establish a state of Israel, persuaded the British government to issue a statement favoring the establishment of a Jewish national home in Palestine. The statement, which became known as the Balfour Declaration, was, in part, payment to the Jews for their support of the British against the Turks during World War I. After the war, the League of Nations ratified the declaration and in 1922 appointed Britain to rule Palestine.

This course of events caused Jews to be optimistic about the eventual establishment of a homeland. Their optimism inspired the immigration to Palestine of Jews from many countries, particularly from Germany when Nazi persecution of Jews began. The arrival of many Jewish immigrants in the 1930s awakened Arab fears that Palestine would become a national homeland for the Jews. By 1936, guerrilla fighting had broken out between the Jews and the Arabs. Unable to maintain peace, Britain issued a white paper in 1939 that restricted Jewish immigration into Palestine. The Jews, feeling betrayed, bitterly opposed the policy and looked to the United States for support.

While President Franklin D. Roosevelt appeared to be sympathetic to the Jewish cause, his assurances to the Arabs that the United States would not intervene without consulting both parties caused public uncertainty about his position. When Harry S. Truman took office, he made clear that his sympathies were with the Jews and accepted the Balfour Declaration, explaining that it was in keeping with former President Woodrow Wilson's principle of "self-determination." Truman initiated several studies of the Palestine situation that supported his belief that, as a result of the Holocaust, Jews were oppressed and also in need of a homeland. Throughout the Roosevelt and Truman administrations, the Departments of War and State, recognizing the possibility of a Soviet-Arab connection and the potential Arab restriction on oil supplies to this country, advised against U.S. intervention on behalf of the Jews.

Britain and the United States, in a joint effort to examine the dilemma, established the "Anglo-American Committee of Inquiry." In April 1946, the committee submitted recommendations that Palestine not be dominated by either Arabs or Jews. It concluded that attempts to establish nationhood or independence would result in civil strife; that a trusteeship agreement aimed at bringing Jews and Arabs together should be established by the United Nations; that full Jewish immigration be allowed into Palestine; and that two autonomous states be established with a strong central government to control Jerusalem, Bethlehem, and the Negev, the southernmost section of Palestine.

British, Arab, and Jewish reactions to the recommendations were not favorable. Jewish attacks in Palestine antagonized the British, and by February 1947, Arab-Jewish communications had collapsed. Britain, anxious to rid itself of the problem, set the United Nations in motion, formally requesting on April 2, 1947, that the U.N. General Assembly set up the Special Committee on Palestine (UNSCOP). This committee recommended that the British mandate over Palestine be ended and that the territory be partitioned into two states. Jewish reaction was mixed — some wanted control of all of Palestine; others realized that partition spelled hope for their dream of a homeland.

The Arabs were not at all agreeable to the UNSCOP plan. In October, the Arab League Council directed the governments of its member states to move troops to the Palestine border. Meanwhile, President Truman instructed the State Department to support the U.N. plan, and, reluctantly it did so. On November 29, 1947, the partition plan was passed by the U.N. General Assembly.

President Truman recognized the provisional Jewish government as the de facto authority of the Jewish State on May 14, 1948. The U.S. delegates to the U.N. and top-ranking State Department officials were angered that Truman released his recognition statement to the press without notifying them first. On May 15, 1948, the first day of Israeli Independence and exactly one year after UNSCOP was established, Arab armies invaded Israel and the first Arab-Israeli war began.

This text was adapted from the article: "Key Press Release on the Recognition of the State of Israel." Social Education 42, 6 (October 1978): 469.