Woman Suffrage and the 19th Amendment

Beginning in the mid-19th century, several generations of woman suffrage supporters lectured, wrote, marched, lobbied, and practiced civil disobedience to achieve what many Americans considered a radical change in the Constitution – guaranteeing women the right to vote. Some suffragists used more confrontational tactics such as picketing, silent vigils, and hunger strikes. Read more... 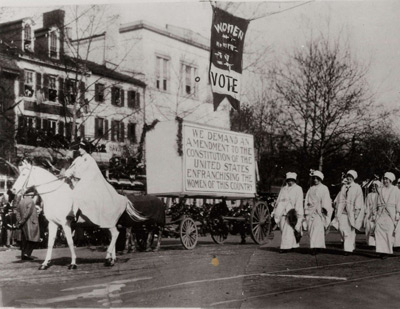 In the second decade of the 20th century, woman suffragists began staging large and dramatic parades to draw attention to their cause. In 1913, more than 5,000 suffragists from around the country paraded down Pennsylvania Avenue in Washington, DC. 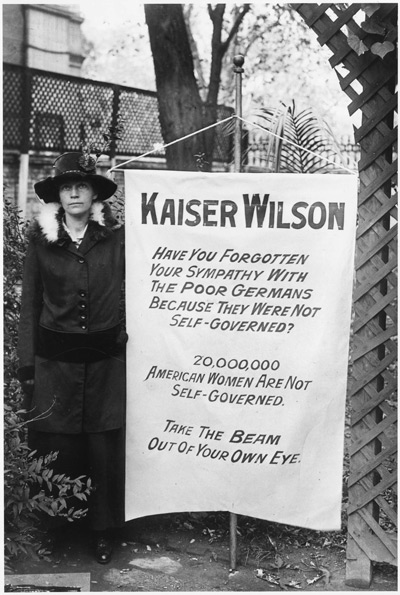 During World War I, suffragists tried to embarrass President Woodrow Wilson into reversing his opposition and supporting a federal woman suffrage amendment. 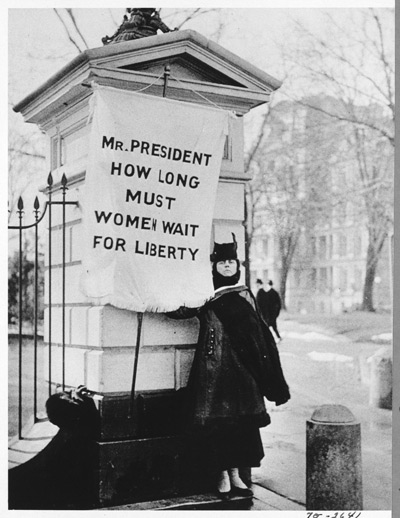 The National Woman Suffrage Association (NWSA), formed by Elizabeth Cady Stanton and Susan B. Anthony, sent this 1871 petition to Congress requesting that suffrage rights be extended to women and that women be heard on the floor of Congress. 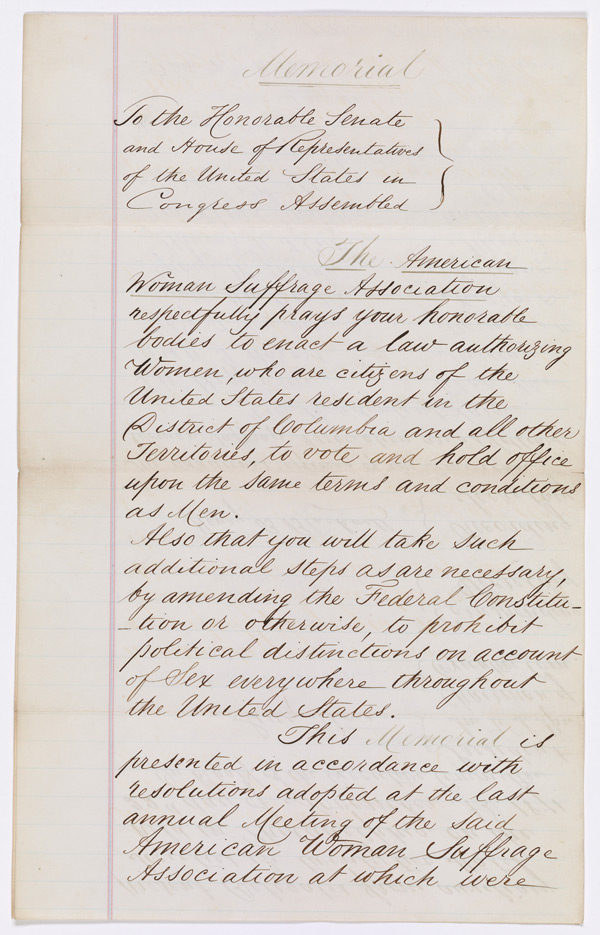 The American Woman Suffrage Association (AWSA), founded by Lucy Stone, Julia Ward Howe, and Thomas Wentworth Higginson, sent this 1872 petition to Congress asking that women in DC and the territories be allowed to vote and hold office. 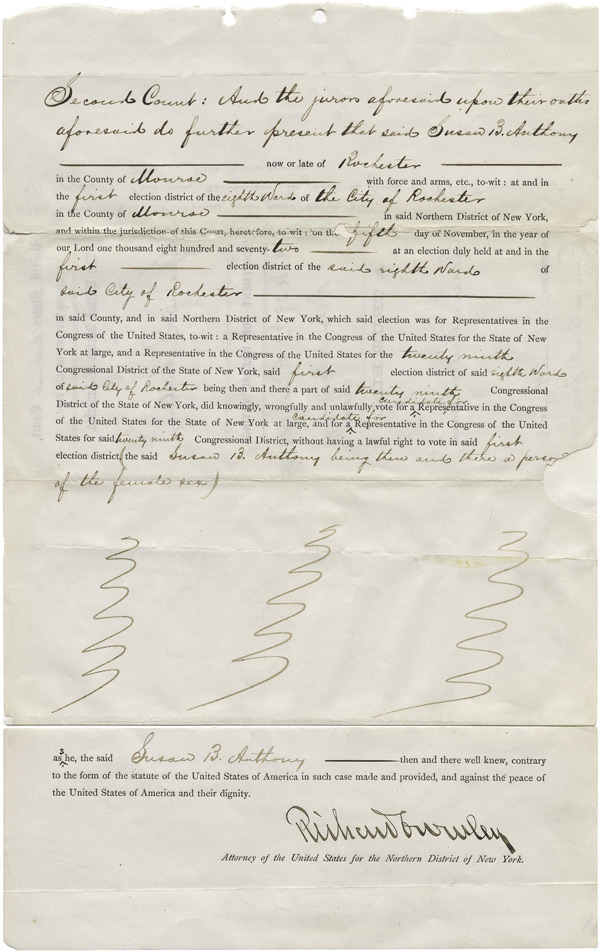 This indictment charged Susan B. Anthony with "wrongfully and unlawfully" voting in the 1872 election in Rochester, NY, "being...a person of the female sex." She was one of several women arrested for illegally voting. 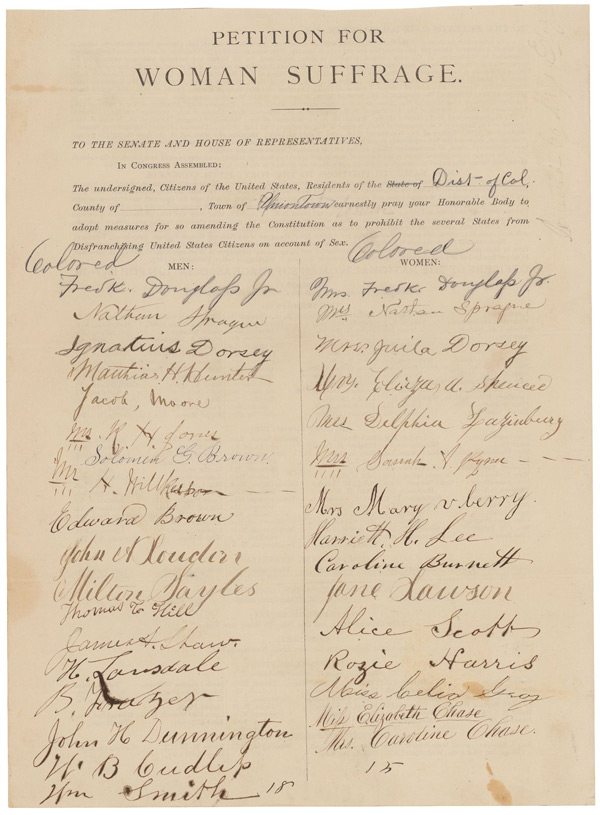 Frederick Douglass's son, daughter, and son-in-law signed this 1878 petition to Congress in favor of woman suffrage, along with other residents of the District of Columbia. 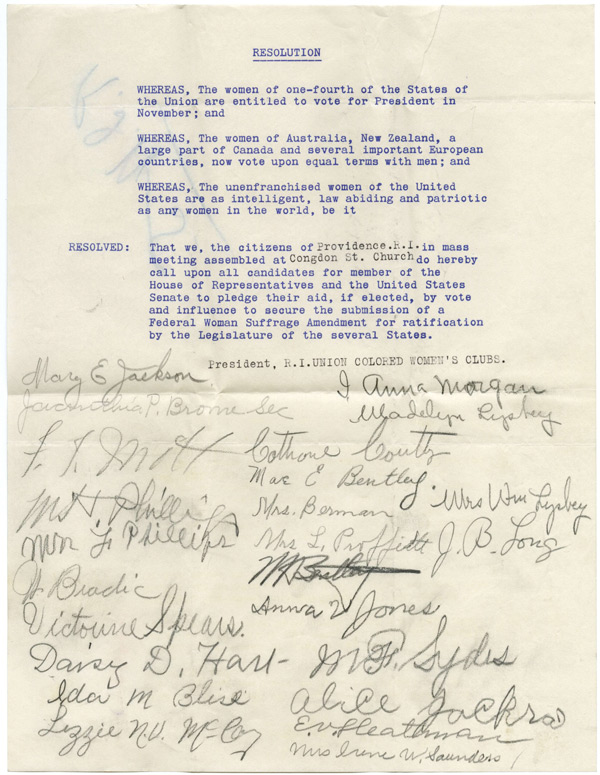 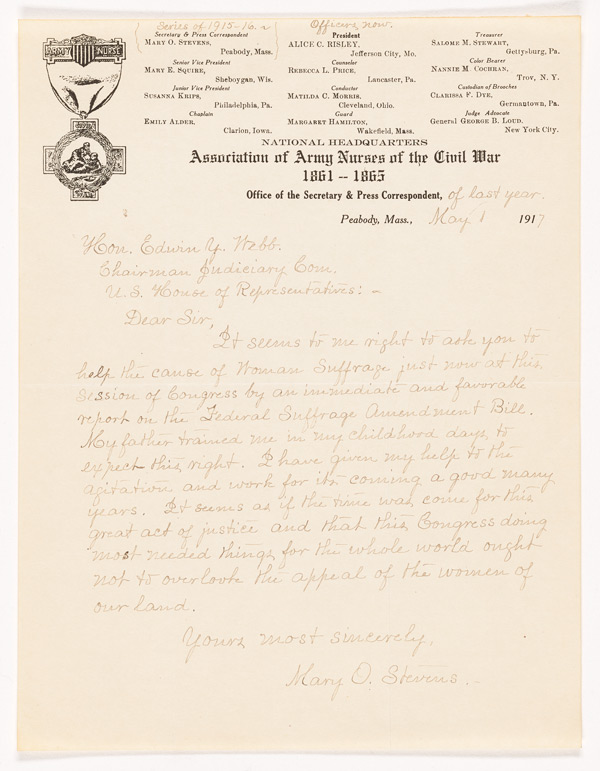 Some women fought for decades for the right to vote. In 1917, Mary O. Stevens, a former Civil War nurse, sent this letter to Rep. Edwin Webb, chairman of the House Judiciary Committee, which held hearings on women's suffrage. 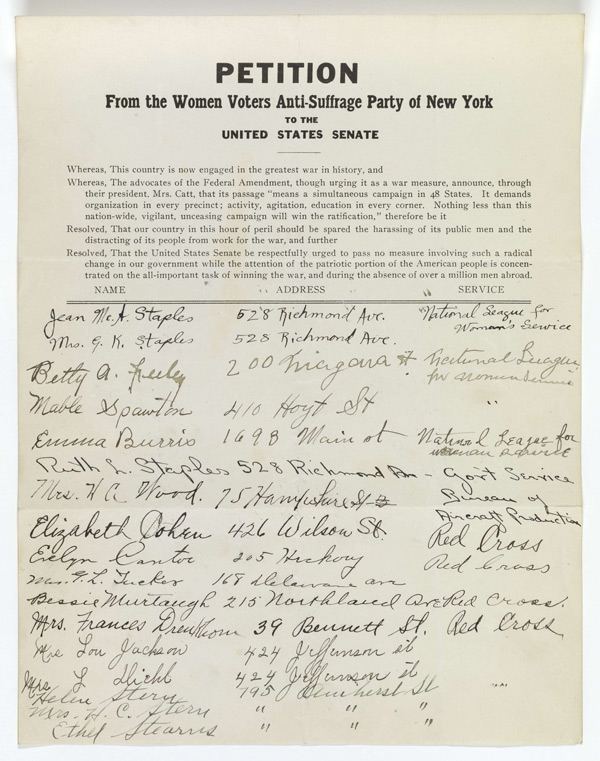 There was strong opposition to enfranchising women. This 1917 petition from the Women Voters Anti-Suffrage Party of New York urged the Senate not to pass a federal suffrage amendment giving women the right to vote. 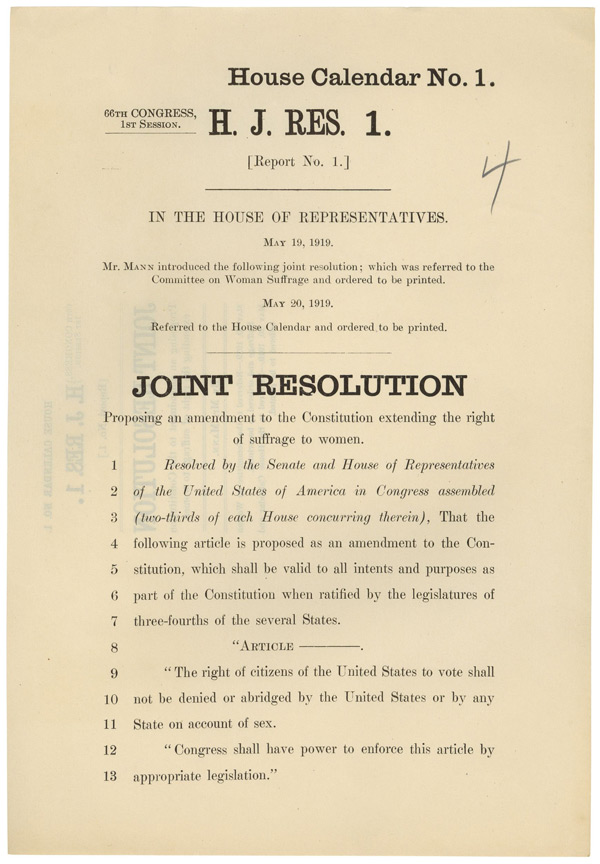 This Congressional resolution, passed in 1919, proposed extending the right to vote to women and became the 19th Amendment to the Constitution. 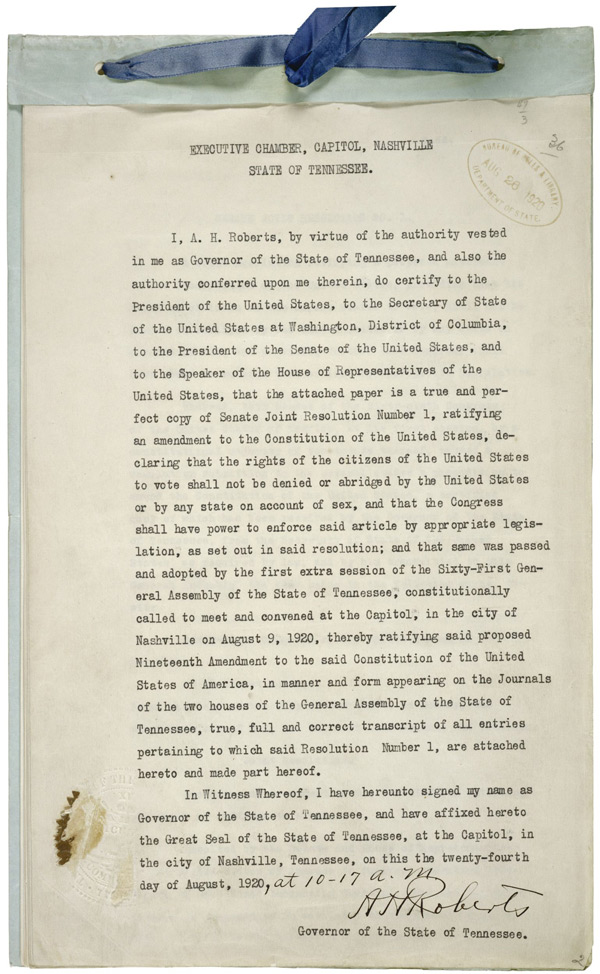 This 1920 statement verified that Tennessee had ratified the 19th Amendment. Tennessee was the 36th state to ratify, crossing the three-fourths-of-states threshold needed to clinch passage of the amendment. 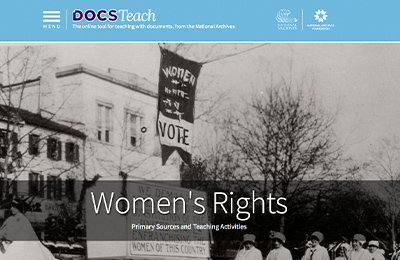 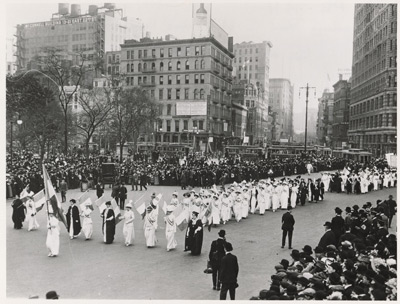 Failure is Impossible is a play that brings to life the facts and emotions of the momentous struggle for voting rights for women. It was first performed in 1995, as part of commemoration of the 75th anniversary of the 19th amendment at the National Archives. The story is told through the voices of Abigail Adams, Elizabeth Cady Stanton, Frederick Douglass, Susan B. Anthony, Sojourner Truth, Frances Gage, Clara Barton, and Carrie Chapman Catt, among others. The script is available for educational uses.

In July 1848 Elizabeth Cady Stanton and Lucretia Mott organized the first women's rights convention in Seneca Falls, NY. The Seneca Falls Convention produced a list of demands called the Declaration of Sentiments. Modeled on the Declaration of Independence, it called for broader educational and professional opportunities for women and the right of married women to control their wages and property. After this historic gathering, women’s voting rights became a central issue in the emerging debate about women’s rights in the United States.

Many of the attendees to the convention were also abolitionists whose goals included universal suffrage – the right to vote for all adults. In 1870 this goal was partially realized when the 15th amendment to the Constitution, granting black men the right to vote, was ratified. Woman suffragists' vehement disagreement over supporting the 15th Amendment, however, resulted in a "schism" that split the women's suffrage movement into two new suffrage organizations that focused on different strategies to win women voting rights.

The National Woman Suffrage Association (NWSA) was formed by Elizabeth Cady Stanton and Susan B. Anthony in May of 1869 – they opposed the 15th amendment because it excluded women. In the year following the ratification of the 15th amendment, the NWSA sent a voting rights petition to the Senate and House of Representatives requesting that suffrage rights be extended to women and that women be granted the privilege of being heard on the floor of Congress.

The second national suffrage organization established in 1869 was the American Woman Suffrage Association (AWSA), founded by Lucy Stone, Julia Ward Howe, and Thomas Wentworth Higginson. The AWSA supported the 15th Amendment and protested the confrontational tactics of the NWSA. The AWSA concentrated on gaining women’s access to the polls at state and local levels, in the belief that victories there would gradually build support for national action on the issue. While a federal woman suffrage amendment was not their priority, an 1871 petition, asking that women in DC and the territories be allowed to vote and hold office, from AWSA leadership to Congress reveals its support for one.

In 1890, the NWSA and AWSA merged into the National American Woman Suffrage Association (NAWSA). It became the largest woman suffrage organization in the country and led much of the struggle for the vote through 1920, when the 19th Amendment was ratified. Stanton became its president; Anthony became its vice president; and Stone became chairman of the executive committee. In 1919, one year before women gained the right to vote with the adoption of the 19th amendment, the NAWSA reorganized into the League of Women Voters.

The tactics used by suffragists went beyond petitions and memorials to Congress. Testing another strategy, Susan B. Anthony registered and voted in the 1872 election in Rochester, NY. As planned, she was arrested for "knowingly, wrongfully and unlawfully vot[ing] for a representative to the Congress of the United States." She was convicted by the State of New York and fined $100, which she insisted she would never pay. On January 12, 1874, Anthony petitioned Congress, requesting "that the fine imposed upon your petitioner be remitted, as an expression of the sense of this high tribunal that her conviction was unjust."

Wealthy white women were not the only supporters of women's suffrage. Frederick Douglass, formerly enslaved and leader of the abolition movement, was also an advocate. He attended the Seneca Falls Convention in 1848. In an editorial published that year in The North Star, the anti-slavery newspaper he published, he wrote, "...in respect to political rights,...there can be no reason in the world for denying to woman the elective franchise,..." By 1877, when he was U.S. marshal for the District of Columbia, Douglass's family was also involved in the movement. His son, Frederick Douglass, Jr.; daughter, Mrs. Nathan Sprague; and son-in-law, Nathan Sprague, all signed a petition to Congress for woman suffrage "...to prohibit the several States from Disfranchising United States Citizens on account of Sex."

A growing number of black women actively supported women's suffrage during this period. They organized women’s clubs across the country to advocate for suffrage, among other reforms. Prominent African American suffragists included Ida B. Wells-Barnett of Chicago, a leading crusader against lynching; Mary Church Terrell, educator and first president of the National Association of Colored Women (NACW); and Adella Hunt Logan, Tuskegee Institute faculty member, who insisted in articles in The Crisis, a publication of the National Association for the Advancement of Colored People (NAACP), that if white women needed the vote to protect their rights, then black women – victims of racism as well as sexism – needed the ballot even more.

In the second decade of the 20th century, suffragists began staging large and dramatic parades to draw attention to their cause. One of the most consequential demonstrations was a march held in Washington, DC, on March 3, 1913. Though controversial because of the march organizers' attempt to exclude, then segregate, women of color, more than 5,000 suffragists from around the country paraded down Pennsylvania Avenue from the U.S. Capitol to the Treasury Building.

Many of the women who had been active in the suffrage movement in the 1860s and 1870s continued their involvement over 50 years later. In 1917, Mary O. Stevens, secretary and press correspondent of the Association of Army Nurses of the Civil War, asked the chairman of the House Judiciary Committee to help the cause of woman suffrage by explaining: "My father trained me in my childhood days to expect this right. I have given my help to the agitation, and work[ed] for its coming a good many years."

During World War I, suffragists tried to embarrass President Woodrow Wilson into reversing his opposition and supporting a federal woman suffrage amendment. But in the heated patriotic climate of wartime, such tactics met with hostility and sometimes violence and arrest. Frustrated with the suffrage movement’s leadership, Alice Paul had broken with the National American Woman Suffrage Association (NAWSA) to form the National Woman’s Party (NWP). It employed more militant tactics to agitate for the vote.

Most notably, the NWP organized the first White House picket in U.S. history on January 10, 1917. They stood vigil at the White House, demonstrating in silence six days a week for nearly three years. The "Silent Sentinels" let their banners – comparing the President to Kaiser Wilhelm II of Germany – speak for them. Many of the sentinels were arrested and jailed in deplorable conditions. Some incarcerated women went on hunger strikes and endured forced feedings. The Sentinels' treatment gained greater sympathy for women's suffrage, and the courts later dismissed all charges against them.

When New York adopted woman suffrage in 1917 and President Woodrow Wilson changed his position to support an amendment in 1918, the political balance began to shift in favor of the vote for women. There was still strong opposition to enfranchising women, however, as illustrated by petitions from anti-suffrage groups.

Eventually suffragists won the political support necessary for ratification of the 19th Amendment to the U.S. Constitution. For 42 years, the measure had been introduced at every session of Congress, but ignored or voted down. It finally passed Congress in 1919 and went to the states for ratification. In May, the House of Representatives passed it by a vote of 304 to 90; two weeks later, the Senate approved it 56 to 25.

Illinois, Wisconsin, and Michigan were the first states to ratify it. On August 18, 1920, it appeared that Tennessee had ratified the amendment – the result of a change of vote by 24 year-old legislator Harry Burn at the insistence of his elderly mother. But those against the amendment managed to delay official ratification. Anti-suffrage legislators fled the state to avoid a quorum, and their associates held massive anti-suffrage rallies and attempted to convince pro-suffrage legislators to oppose ratification. However, Tennessee reaffirmed its vote and delivered the crucial 36th ratification necessary for final adoption. While decades of struggle to include African Americans and other minority women in the promise of voting rights remained, the face of the American electorate had changed forever.