The Treaty of Kanagawa

Sketch of Simoda from the Treaty of Kanagawa, 1854 Record Group 11 General Records of the United States Government

On March 31, 1854, the first treaty between Japan and the United States was signed. The Treaty was the result of an encounter between an elaborately planned mission to open Japan and an unwavering policy by Japan's government of forbidding commerce with foreign nations. Two nations regarding each other as "barbarians" found a way to reach agreement.

The United States Government was determined to take the lead in bringing Japan's two-century-old policy of self-imposed isolation to a close. The Fillmore administration sent Commodore Matthew C. Perry and a small fleet of sloops and the latest steam-powered ships to go to Edo (Tokyo) Bay to insist on a treaty that would protect the rights of American whalers, provide for coaling ports, and eventually lead to trade.

Perry achieved two of his three central objectives by improving America's access to strategic energy resources. He succeeded in getting two coaling ports for the Navy's new steamships and in protecting America's oil workers (the whalers). He did not, however, open Japan to trade. It wasn't until 1858 that the U.S. Consul at last achieved Perry's final objective: establishing a commercial treaty. 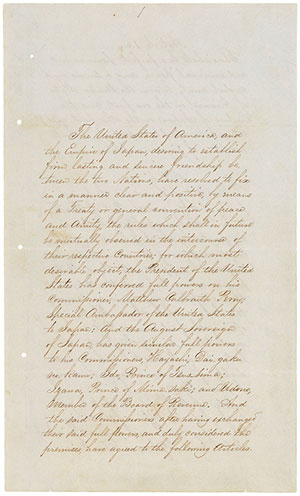 One interesting feature is the omission of a Japanese signature on the English language version of the treaty. Perry's letter to the Navy Secretary, also in the holdings of the Archives, offers an explanation: "It will be observed that the practice usually pursued in affixing signatures to treaties was departed from on this occasion, and for reason assigned by the Japanese, that their laws forbade the subjects of the Empire from putting their names to any document written in a foreign language." The missing signature demonstrates that Perry's determination to achieve mission objectives was tempered by a willingness to compromise on issues of custom.

The seeds of tensions and conflicts which would figure prominently in the first century of the Japanese-American relationship are evident in the Treaty of Kanagawa . Yet in the fact that warrior/diplomats on both sides were able to put aside their cannons and swords long enough to reach this accord, we also see the potential for two cultures to find mutual understanding, and we find the roots of a peaceful strategic alliance that has lasted for more than 50 years.