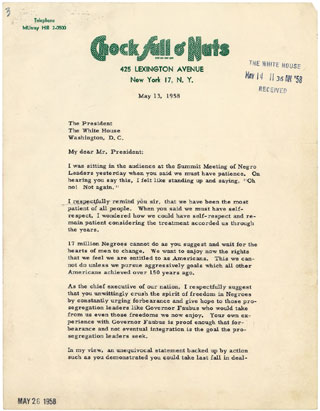 Jack Roosevelt Robinson (1919-72) was the first African American to "officially" play in Major League Baseball. When he retired from the game, Jackie Robinson went on to champion the cause of civil rights from his position as a prominent executive of the Chock Full o'Nuts Corporation.

Robinson had grown increasingly impatient with what he regarded as President Eisenhower's failure to act decisively in combating racism. In this letter, he expresses his frustration and calls upon the President to finally guarantee Federal support of black civil rights.

Visit the National Archives Museum
Journey into our nation's past.