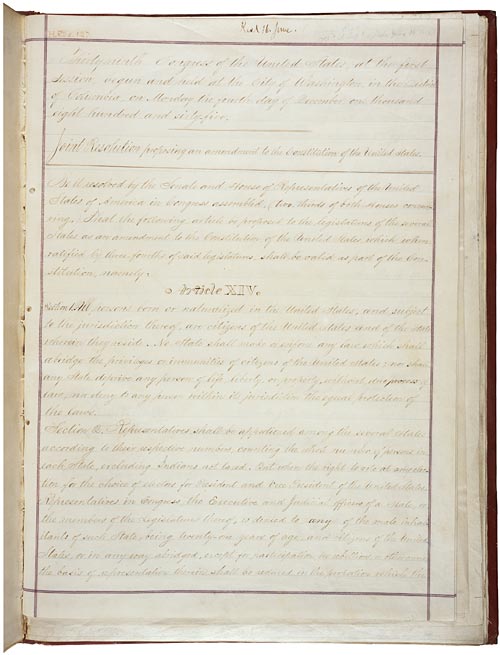 Passed by Congress June 13, 1866, and ratified July 9, 1868, the 14th Amendment extended liberties and rights granted by the Bill of Rights to formerly enslaved people.

Following the Civil War, Congress submitted to the states three amendments as part of its Reconstruction program to guarantee equal civil and legal rights to Black citizens. A major provision of the 14th Amendment was to grant citizenship to “All persons born or naturalized in the United States,” thereby granting citizenship to formerly enslaved people.

Another equally important provision was the statement that “nor shall any state deprive any person of life, liberty, or property, without due process of law; nor deny to any person within its jurisdiction the equal protection of the laws.” The right to due process of law and equal protection of the law now applied to both the federal and state governments.

On June 16, 1866, the House Joint Resolution proposing the 14th Amendment to the Constitution was submitted to the states. On July 28, 1868, the 14th amendment was declared, in a certificate of the Secretary of State, ratified by the necessary 28 of the 37 States, and became part of the supreme law of the land.

Congressman John A. Bingham of Ohio, the primary author of the first section of the 14th Amendment, intended that the amendment also nationalize the Bill of Rights by making it binding upon the states. When introducing the amendment, Senator Jacob Howard of Michigan specifically stated that the privileges and immunities clause would extend to the states “the personal rights guaranteed and secured by the first eight amendments.” Historians disagree on how widely Bingham's and Howard's views were shared at the time in the Congress, or across the country in general. No one in Congress explicitly contradicted their view of the amendment, but only a few members said anything at all about its meaning on this issue. For many years, the Supreme Court ruled that the amendment did not extend the Bill of Rights to the states.

Not only did the 14th Amendment fail to extend the Bill of Rights to the states; it also failed to protect the rights of Black citizens. A legacy of Reconstruction was the determined struggle of Black and white citizens to make the promise of the 14th Amendment a reality. Citizens petitioned and initiated court cases, Congress enacted legislation, and the executive branch attempted to enforce measures that would guard all citizens’ rights. While these citizens did not succeed in empowering the 14th Amendment during Reconstruction, they effectively articulated arguments and offered dissenting opinions that would be the basis for change in the 20th century.

Section 2.
Representatives shall be apportioned among the several States according to their respective numbers, counting the whole number of persons in each State, excluding Indians not taxed. But when the right to vote at any election for the choice of electors for President and Vice-President of the United States, Representatives in Congress, the Executive and Judicial officers of a State, or the members of the Legislature thereof, is denied to any of the male inhabitants of such State, being twenty-one years of age, and citizens of the United States, or in any way abridged, except for participation in rebellion, or other crime, the basis of representation therein shall be reduced in the proportion which the number of such male citizens shall bear to the whole number of male citizens twenty-one years of age in such State.

Section 3.
No person shall be a Senator or Representative in Congress, or elector of President and Vice-President, or hold any office, civil or military, under the United States, or under any State, who, having previously taken an oath, as a member of Congress, or as an officer of the United States, or as a member of any State legislature, or as an executive or judicial officer of any State, to support the Constitution of the United States, shall have engaged in insurrection or rebellion against the same, or given aid or comfort to the enemies thereof. But Congress may by a vote of two-thirds of each House, remove such disability.

Section 5.
The Congress shall have the power to enforce, by appropriate legislation, the provisions of this article.