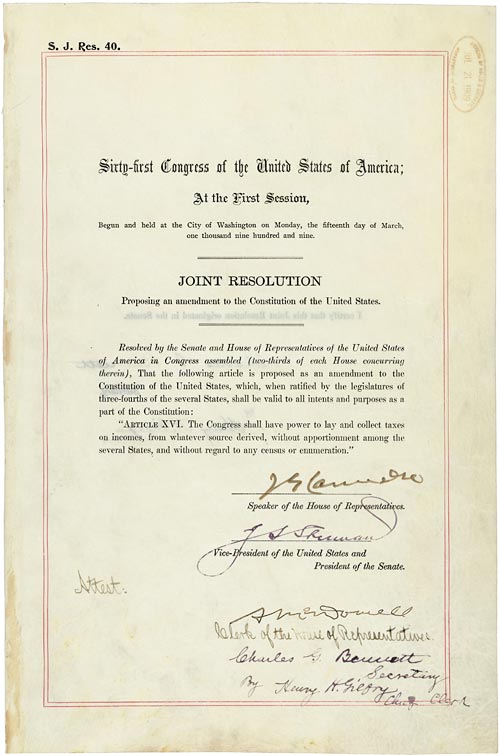 Passed by Congress on July 2, 1909, and ratified February 3, 1913, the 16th amendment established Congress's right to impose a Federal income tax.

Far-reaching in its social as well as its economic impact, the income tax amendment became part of the Constitution by a curious series of events culminating in a bit of political maneuvering that went awry.

The financial requirements of the Civil War prompted the first American income tax in 1861. At first, Congress placed a flat 3-percent tax on all incomes over $800 and later modified this principle to include a graduated tax. Congress repealed the income tax in 1872, but the concept did not disappear.

After the Civil War, the growing industrial and financial markets of the eastern United States generally prospered. But the farmers of the south and west suffered from low prices for their farm products, while they were forced to pay high prices for manufactured goods. Throughout the 1860s, 1870s, and 1880s, farmers formed such political organizations as the Grange, the Greenback Party, the National Farmers’ Alliance, and the People’s (Populist) Party. All of these groups advocated many reforms (see the Interstate Commerce Act) considered radical for the times, including a graduated income tax.

In 1894, as part of a high tariff bill, Congress enacted a 2-percent tax on income over $4,000. The tax was almost immediately struck down by a five-to-four decision of the Supreme Court, even though the Court had upheld the constitutionality of the Civil War tax as recently as 1881. Although farm organizations denounced the Court’s decision as a prime example of the alliance of government and business against the farmer, a general return of prosperity around the turn of the century softened the demand for reform. Democratic Party Platforms under the leadership of three-time Presidential candidate William Jennings Bryan, however, consistently included an income tax plank, and the progressive wing of the Republican Party also espoused the concept.

In 1909 progressives in Congress again attached a provision for an income tax to a tariff bill. Conservatives, hoping to kill the idea for good, proposed a constitutional amendment enacting such a tax; they believed an amendment would never received ratification by three-fourths of the states. Much to their surprise, the amendment was ratified by one state legislature after another, and on February 25, 1913, with the certification by Secretary of State Philander C. Knox, the 16th amendment took effect. Yet in 1913, due to generous exemptions and deductions, less than 1 percent of the population paid income taxes at the rate of only 1 percent of net income.

This document settled the constitutional question of how to tax income and, by so doing, effected dramatic changes in the American way of life.

Sixty-first Congress of the United States of America, At the First Session,

Begun and held at the City of Washington on Monday, the fifteenth day of March, one thousand nine hundred and nine.

JOINT RESOLUTION
Proposing an amendment to the Constitution of the United States.

Resolved by the Senate and House of Representatives of the United States of America in Congress assembled (two-thirds of each House concurring therein), That the following article is proposed as an amendment to the Constitution of the United States, which, when ratified by the legislature of three-fourths of the several States, shall be valid to all intents and purposes as a part of the Constitution:

"ARTICLE XVI. The Congress shall have power to lay and collect taxes on incomes, from whatever source derived, without apportionment among the several States, and without regard to any census or enumeration."