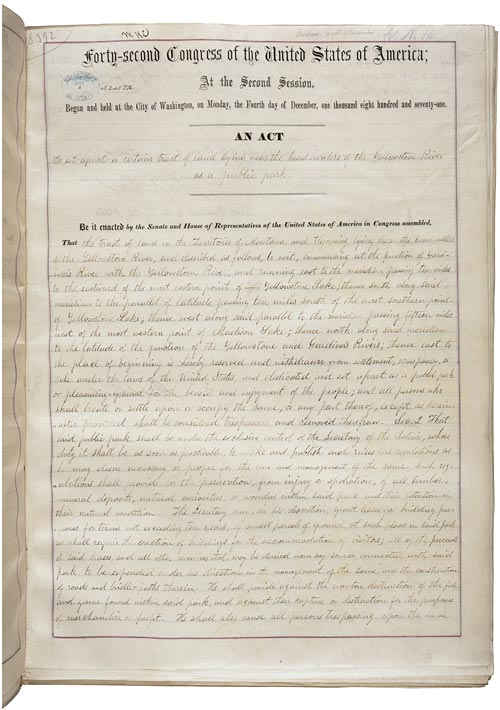 Yellowstone became the first Federally protected national park by the Act of Congress signed into law on March 1, 1872.

In the years preceding the Civil War, U.S. government exploration made the nation keenly aware of its western lands. Once the war resolved the question of survival of the Union, the national government turned more attention to its western territory and exploitation of the continent’s wealth. Because the environment of the West differed significantly from that of the East, explorers were charged with identifying natural resources and assessing the utility of the land for settlement.

The U.S. Army was the first in the field. Zebulon Pike, Stephen Long, John C. Fremont and others gave the Corps of Engineers the basis of experience that continued most notably with George M. Wheeler. Even as the Smithsonian Institution and the Department of the Interior expanded their efforts, the Army continued mounting its own surveys until 1879, when all surveys, civilian and military, were consolidated under the U.S. Geological Survey.

Civilian explorers eventually replaced military engineers. On the federal level, Clarence King, John Wesley Powell and Ferdinand Hayden proceeded with the collection of information from the field followed by classification, organization of information, and publications of the findings of their surveys. In addition to the annual reports of the surveys, government explorers disseminated information to the east coast about western environment and geology by lecturing, publishing in scientific and popular journals, giving interviews to newspapers, and providing entrepreneurs with images for duplication on stenographic cards and chromolithographic print sets.

The wide public interest reflected the transformation of American attitude toward the West. Hitherto, for the majority of Americans in the East, the West had been a place to cross over on the way to the Pacific coast or a place of mystery, fearsome in either case. Now it became America’s wonderland.

Photographs and canvasses conveyed the monumental size and geological complexity of the region and enticed viewers to experience its scenic splendors themselves. What historian William Goetzmann calls “the cult of Naturalism” was an extension of the Romantic worldview, where the individual sought out unspoiled wilderness to experience nature’s power first hand. As once tourists had flocked to Niagara Falls to revere the sublime, virtually sacred vista and to revel in the patriotic pride at America’s natural blessing, western sites such as Yosemite and Yellowstone now became popular vacation destinations.

Public knowledge and the popularity of the wilderness paradoxically posed a threat to its survival. The settlement and commercialization of western lands inevitably followed their opening. Leaders of the four major government surveys, while promoting settlement actively, were nonetheless alarmed by the abuses of settlement: monopoly of water rights, speculation by land rings, and mistreatment of Americans Indians on reserved lands. Years before Theodore Roosevelt and the era of Progressives, these public servants formulated guidelines for prevention or reformation of abuse, fought for and erected the structures of bureaus and commissions to advance their agenda, and trained experts in the science and social sciences who would be agents of reform.

One of the most imaginative and uniquely American responses to the endangered wilderness was the invention of the national park system. In 1864, the State of California reserved Yosemite as a parkland. The federal government followed shortly afterward. Early trappers and army explorers had been profoundly impressed by the upper reaches of the Yellowstone River, a region called Colter’s Hell.

Ferdinand Hayden surveyed the area in 1871. Upon his return to the East, he mounted a campaign to promote, but also to protect, the natural wonders he had seen. He quickly wrote a well-received article for Scribner’s Monthly that included fellow expedition member Thomas Moran’s illustrations. He provided Charles Bierstadt, brother to the artist and a leading manufacturer of stereographic cards, with copies of William Jackson’s expedition photographs. He lobbied members of Congress by presenting them with an album of Jackson’s Yellowstone photographs. He was supported in his effort by Jay Cooke, the railroad magnate who anticipated increased tourist ridership on his lines serving the Yellowstone area.

On March 1, 1872, Congress passed into law the act creating Yellowstone “a public park or pleasuring-ground for the benefit and enjoyment of the people.”

Forty-Second Congress of the United States of America;

At the Second Session, Begun and held at the City of Washington, on Monday, the Fourth day of December, one thousand eight hundred and seventy-one.

AN ACT to set apart a certain tract of land lying near the headwaters of the Yellowstone River as a public park.

Be it enacted by the Senate and House of Representatives of the United States of America in Congress assembled, That the tract of land in the Territories of Montana and Wyoming, lying near the headwaters of the Yellowstone River, and described as follows, to wit, commencing at the junction of Gardiner's river with the Yellowstone river, and running east to the meridian passing ten miles to the eastward of the most eastern point of Yellowstone lake; thence south along said meridian to the parallel of latitude passing ten miles south of the most southern point of Yellowstone lake; thence west along said parallel to the meridian passing fifteen miles west of the most western point of Madison lake; thence north along said meridian to the latitude of the junction of Yellowstone and Gardiner's rivers; thence east to the place of beginning, is hereby reserved and withdrawn from settlement, occupancy, or sale under the laws of the United States, and dedicated and set apart as a public park or pleasuring-ground for the benefit and enjoyment of the people; and all persons who shall locate or settle upon or occupy the same, or any part thereof, except as hereinafter provided, shall be considered trespassers and removed therefrom.

SEC 2. That said public park shall be under the exclusive control of the Secretary of the Interior, whose duty it shall be, as soon as practicable, to make and publish such rules and regulations as he may deem necessary or proper for the care and management of the same. Such regulations shall provide for the preservation, from injury or spoliation, of all timber, mineral deposits, natural curiosities, or wonders within said park, and their retention in their natural condition. The Secretary may in his discretion, grant leases for building purposes for terms not exceeding ten years, of small parcels of ground, at such places in said park as shall require the erection of buildings for the accommodation of visitors; all of the proceeds of said leases, and all other revenues that may be derived from any source connected with said park, to be expended under his direction in the management of the same, and the construction of roads and bridle-paths therein. He shall provide against the wanton destruction of the fish and game found within said park, and against their capture or destruction for the purposes of merchandise or profit. He shall also cause all persons trespassing upon the same after the passage of this act to be removed therefrom, and generally shall be authorized to take all such measures as shall be necessary or proper to fully carry out the objects and purposes of this act.