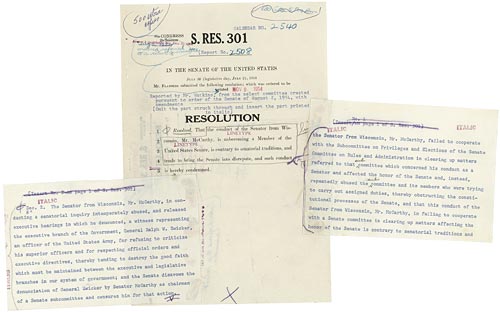 On December 2, 1954, the Senate voted to censure Senator Joseph McCarthy, who had led the fight in Congress to root out suspected Communists from the Federal Government. The censure described his behavior as "contrary to senatorial traditions."

The early years of the Cold War saw the United States facing a hostile Soviet Union, the "loss" of China to communism, and war in Korea. In this politically charged atmosphere, fears of Communist influence over American institutions spread easily.

On February 9, 1950, Joseph McCarthy, a Republican Senator from Wisconsin, claimed that he had a list of 205 State Department employees who were Communists. While he offered little proof, the claims gained the Senator great notoriety.

In June, Senator Margaret Chase Smith of Maine and six fellow Republicans issued a "Declaration of Conscience" asserting that because of McCarthy’s tactics, the Senate had been "debased to the level of a forum for hate and character assassination." However, McCarthy took advantage of the Cold War atmosphere of fear and suspicion and with strong support in the opinion polls, McCarthy’s attacks and interventions in senatorial elections brought defeat to some of his party’s Democratic opponents.

After Republicans took control of the White House and Congress in 1953, McCarthy was named chairman of the Committee on Government Operations and its Subcommittee on Investigations. From these posts he continued to accuse Government agencies of being "soft" on communism, but he was now attacking a Republican administration.

In 1954 McCarthy’s investigation of security threats in the U.S. Army was televised. McCarthy’s bullying of witnesses turned public opinion against the Senator. On December 2, 1954, the Senate voted to censure him, describing his behavior as "contrary to senatorial traditions."

Republican Senators Ralph Flanders of Vermont, Arthur Watkins of Utah, and Margaret Chase Smith of Maine led the efforts to discipline McCarthy. Flanders introduced two separate resolutions against McCarthy, one removing McCarthy from his chairmanships and the other calling for his censure. The censure resolution moved forward with debate beginning July 30, 1954. The full Senate took up the resolution on November 5.

This copy of the resolution catches the debate on November 9 as the Senate refined the wording of its resolution. The substance of the first count, charging McCarthy with failure to cooperate with a Senate subcommittee, remained unchanged in the final resolution. The second count was dropped for a condemnation of McCarthy’s attacks on the very members of the committee that considered his censure.

Resolved, That the Senator from Wisconsin, Mr. McCarthy, failed to cooperate with the Subcommittee on Privileges and Elections of the Senate Committee on Rules and Administration in clearing up matters referred to that subcommittee which concerned his conduct as a Senator and affected the honor of the Senate and, instead, repeatedly abused the subcommittee and its members who were trying to carry out assigned duties, thereby obstructing the constitutional processes of the Senate, and that this conduct of the Senator from Wisconsin, Mr. McCarthy, is contrary to senatorial traditions and is hereby condemned.

Sec 2. The Senator from Wisconsin, Mr. McCarthy, in writing to the chairman of the Select Committee to Study Censure Charges (Mr. Watkins) after the Select Committee had issued its report and before the report was presented to the Senate charging three members of the Select Committee with "deliberate deception" and "fraud" for failure to disqualify themselves; in stating to the press on November 4, 1954, that the special Senate session that was to begin November 8, 1954, was a "lynch-party"; in repeatedly describing this special Senate session as a "lynch bee" in a nationwide television and radio show on November 7, 1954; in stating to the public press on November 13, 1954, that the chairman of the Select Committee (Mr. Watkins) was guilty of "the most unusual, most cowardly things I've ever heard of" and stating further: "I expected he would be afraid to answer the questions, but didn't think he'd be stupid enough to make a public statement"; and in characterizing the said committee as the "unwitting handmaiden," "involuntary agent" and "attorneys-in-fact" of the Communist Party and in charging that the said committee in writing its report "imitated Communist methods -- that it distorted, misrepresented, and omitted in its effort to manufacture a plausible rationalization" in support of its recommendations to the Senate, which characterizations and charges were contained in a statement released to the press and inserted in the Congressional Record of November 10, 1954, acted contrary to senatorial ethics and tended to bring the Senate into dishonor and disrepute, to obstruct the constitutional processes of the Senate, and to impair its dignity; and such conduct is hereby condemned.