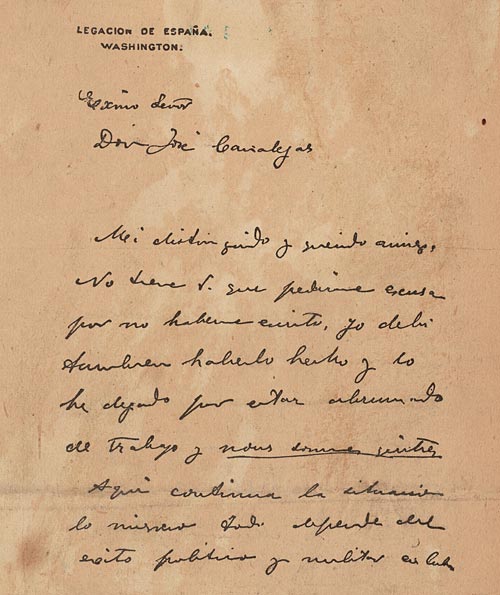 This letter, written by the Spanish Ambassador to the United States, Enrique Dupuy de Lôme, criticized American President William McKinley by calling him weak and concerned only with gaining the favor of the crowd. Publication of the letter helped generate public support for a war with Spain over the issue of independence for the Spanish colony of Cuba.

Cuban revolutionaries intercepted the letter from the mail and released it to the Hearst press, which published it on February 9, 1898, in the New York Journal. De Lôme’s unflattering remarks about McKinley helped fuel animosity and readiness for war in the United States.

it once more shows what McKinley is, weak and a bidder for the admiration of the crowd besides being a would-be politician who tries to leave a door open behind himself while keeping on good terms with the jingoes of his party.

Two months later, on April 11, 1898, McKinley delivered a war message to Congress asking for "forcible intervention" by the United States to establish peace in Cuba.

My distinguished and dear friend:
You have no reason to ask my excuses for not having written to me, I ought also to have written to you but I have put off doing so because overwhelmed with work and nous sommes quittes.

The situation here remains the same. Everything depends on the political and military outcome in Cuba. The prologue of all this, in this second stage (phase) of the war, will end the day when the colonial cabinet shall be appointed and we shall be relieved in the eyes of this country of a part of the responsibility for what is happening in Cuba while the Cubans, whom these people think so immaculate, will have to assume it.

Until then, nothing can be clearly seen, and I regard it as a waste of time and progress, by a wrong road, to be sending emissaries to the rebel camp, or to negotiate with the autonomists who have as yet no legal standing, or to try to ascertain the intentions and plans of this government. The (Cuban) refugees will keep on returning one by one and as they do so will make their way into the sheep-fold, while the leaders in the field will gradually come back. Neither the one nor the other class had the courage to leave in a body and they will not be brave enough to return in a body.

The Message has been a disillusionment to the insurgents who expected something different; but I regard it as bad (for us).

Besides the ingrained and inevitable bluntness (grosería) with which is repeated all that the press and public opinion in Spain have said about Weyler, it once more shows what McKinley is, weak and a bidder for the admiration of the crowd besides being a would-be politician (politicastro) who tries to leave a door open behind himself while keeping on good terms with the jingoes of his party.

Nevertheless, whether the practical results of it (the Message) are to be injurious and adverse depends only upon ourselves.

I am entirely of your opinions; without a military end of the matter nothing will be accomplished in Cuba, and without a military and political settlement there will always be the danger of encouragement being give to the insurgents, buy a part of the public opinion if not by the government.

I do not think sufficient attention has been paid to the part England is playing.

Nearly all the newspaper rabble that swarms in your hotels are Englishmen, and while writing for the Journal they are also correspondents of the most influential journals and reviews of London. It has been so ever since this thing began.

As I look at it, England’s only object is that the Americans should amuse themselves with us and leave her alone, and if there should be a war, that would the better stave off the conflict which she dreads but which will never come about.

It would be very advantageous to take up, even if only for effect, the question of commercial relations and to have a man of some prominence sent hither, in order that I may make use of him here to carry on a propaganda among the seantors and others in opposition to the Junta and to try to win over the refugees.

So, Amblard is coming. I think he devotes himself too much to petty politics, and we have got to do something very big or we shall fail.

Adela returns your greeting, and we all trust that next year you may be a messenger of peace and take it as a Christmas gift to poor Spain.

Ever your attached friend and servant,
ENRIQUE DUPUY de LÔME.