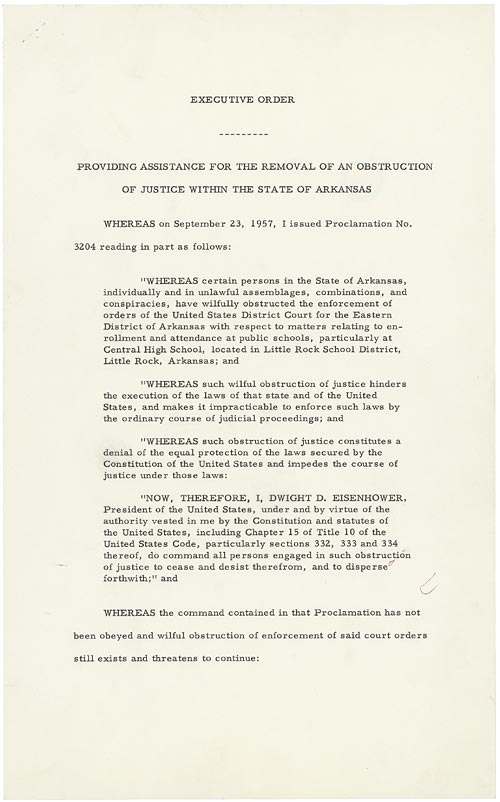 On May 17, 1954, the U.S. Supreme Court ruled in Brown v. Board of Education that segregated schools were "inherently unequal" and ordered that U.S. public schools be desegregated "with all deliberate speed."

Within a week of the 1954 decision, Arkansas was one of two Southern states to announce it would begin immediately to take steps to comply with the Brown decision. Arkansas's law school had been integrated since 1949, and seven of its eight state universities had desegregated. African Americans had been appointed to state boards and elected to local offices. It had already desegregated its public buses as well as its zoo, library, and parks system.

In the summer of 1957, the city of Little Rock made plans to desegregate its public schools. Little Rock’s school board had voted unanimously for a plan that started with the desegregation of the high school in 1957, followed by junior high schools the next year, and elementary schools following.

The night before school was to start, on September 2, Governor Faubus announced that he had called out the state's National Guard to surround Little Rock Central High School and preserve order. He explained that he was taking this action to protect citizens and property from possible violence by protesters he claimed were headed in caravans toward Little Rock.

On September 4, the nine Black students attempted to enter Central High. The students had planned to meet and enter as a group; though one student, Elizabeth Eckford, did not receive this news and attempted to enter the school by herself, only to be threatened and harassed by an angry mob of segregationists. The students were turned away and denied entry by the Arkansas National Guard. That evening, Governor Faubus revealed that he had ordered the National Guard to prevent the Black students from entering.

President Eisenhower, who was vacationing in Newport, RI, invited meet Governor Faubus to meet him at the Naval Base at Newport to discuss the tense situation. In the meeting, Faubus indicated that he would respect the desegregation order. Eisenhower therefore suggested that Faubus not necessarily withdraw the National Guard troops, but instruct them to preserve order and allow the Black students to attend Central High.

However, once back in Little Rock, Governor Faubus withdrew the National Guard. A few days later, when the Black students entered the school, a full-scale riot erupted. The situation was quickly out of control, as Governor Faubus failed to stop the violence. Finally, Congressman Brooks Hays and Little Rock Mayor Woodrow Mann asked the federal government for help, first in the form of U.S. marshals.

President Dwight D. Eisenhower, as the chief law enforcement officer of the United States, was presented with a difficult problem. He was required to uphold the Constitution and the laws, but he also wanted to avoid a bloody confrontation in Arkansas. With Executive Order 10730, the President placed the Arkansas National Guard under federal control and sent 1,000 U.S. Army paratroopers from the 101st Airborne Division to assist them in restoring order in Little Rock.

"WHEREAS certain persons in the state of Arkansas, individually and in unlawful assemblages, combinations, and conspiracies, have willfully obstructed the enforcement of orders of the United States District Court for the Eastern District of Arkansas with respect to matters relating to enrollment and attendance at public schools, particularly at Central High School, located in Little Rock School District, Little Rock, Arkansas; and

"WHEREAS such willful obstruction of justice hinders the execution of the laws of that State and of the United States, and makes it impracticable to enforce such laws by the ordinary course of judicial proceedings; and

"WHEREAS such obstruction of justice constitutes a denial of the equal protection of the laws secured by the Constitution of the United States and impedes the course of justice under those laws:

"NOW, THEREFORE, I, DWIGHT D. EISENHOWER, President of the United States, under and by virtue of the authority vested in me by the Constitution and Statutes of the United States, including Chapter 15 of Title 10 of the United States Code, particularly sections 332, 333 and 334 thereof, do command all persons engaged in such obstruction of justice to cease and desist therefrom, and to disperse forthwith;" and

WHEREAS the command contained in that Proclamation has not been obeyed and willful obstruction of enforcement of said court orders still exists and threatens to continue:

NOW, THEREFORE, by virtue of the authority vested in me by the Constitution and Statutes of the United States, including Chapter 15 of Title 10, particularly sections 332, 333 and 334 thereof, and section 301 of Title 3 of the United States Code, It is hereby ordered as follows:

SEC. 2. The Secretary of Defense is authorized and directed to take all appropriate steps to enforce any orders of the United States District Court for the Eastern District of Arkansas for the removal of obstruction of justice in the State of Arkansas with respect to matters relating to enrollment and attendance at public schools in the Little Rock School District, Little Rock, Arkansas. In carrying out the provisions of this section, the Secretary of Defense is authorized to use the units, and members thereof, ordered into the active military service of the United States pursuant to Section 1 of this Order.