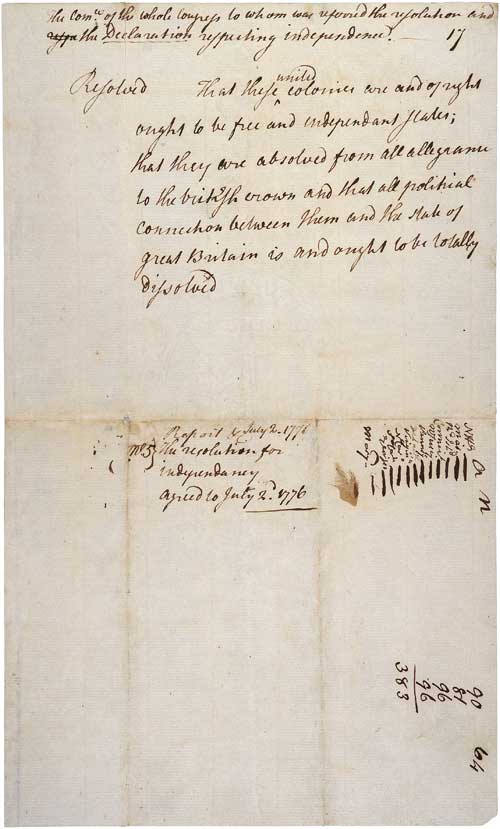 Citation: Adoption of the Resolution Calling for Independence from England; 7/2/1776; Reports on Administrative Affairs of the Congress; Papers of the Continental Congress, 1774 - 1789; Records of the Continental and Confederation Congresses and the Constitutional Convention, Record Group 360; National Archives Building, Washington, DC.

On June 7, 1776, Richard Henry Lee of Virginia, introduced this resolution in the Second Continental Congress proposing independence for the American colonies.

In the early 1770s, more and more colonists became convinced that the British Parliament intended to take away their freedom. After fighting broke out in Massachusetts in the spring of 1775, the King declared the colonists "in a state of open and avowed rebellion." For the first time, many colonists began to seriously consider cutting ties with Britain.

The colonists elected delegates to attend a Continental Congress that eventually became the governing body of the union during the Revolution. Its second meeting convened in Philadelphia in 1775. The delegates to Congress adopted strict rules of secrecy to protect the cause of American liberty and their own lives. In less than a year, most of the delegates abandoned hope of reconciliation with Britain.

On June 7, 1776, Richard Henry Lee introduced a resolution "that these united colonies are and of right ought to be free and independent states," acting under the instruction of the Virginia Convention. The Lee Resolution contained three parts: a declaration of independence, a call to form foreign alliances, and "a plan for confederation."

On June 11, 1776, the Congress appointed three concurrent committees in response to the Lee Resolution: one to draft a declaration of independence, a second to draw up a plan "for forming foreign alliances," and a third to "prepare and digest the form of a confederation."

Because many members of the Congress believed the actions Lee proposed to be premature or wanted instructions from their colonies before voting, approval was deferred until July 2. On that date, Congress adopted the first part (the declaration). The words of the Lee Resolution are echoed in the Declaration of Independence.

The document seen here shows the vote on the Lee Resolution — the affirmative votes of 12 colonies are listed at the right. New York cast no vote until the newly elected New York Convention upheld the Declaration of Independence on July 9, 1776.

The plan for making treaties was not approved until September of 1776; the plan of confederation was delayed until November of 1777.

Resolved, That these United Colonies are, and of right ought to be, free and independent States, that they are absolved from all allegiance to the British Crown, and that all political connection between them and the State of Great Britain is, and ought to be, totally dissolved.

That it is expedient forthwith to take the most effectual measures for forming foreign Alliances.