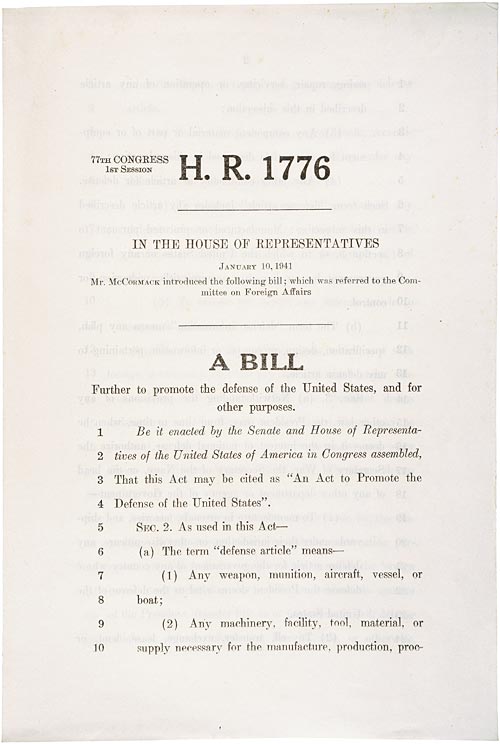 In July 1940, after Britain had sustained the loss of 11 destroyers to the German Navy over a 10-day period, newly elected British Prime Minister Winston Churchill requested help from President Roosevelt. Roosevelt responded by exchanging 50 destroyers for 99-year leases on British bases in the Caribbean and Newfoundland. As a result, a major foreign policy debate erupted over whether the United States should aid Great Britain or maintain strict neutrality.

In the 1940 Presidential election campaign, Roosevelt promised to keep America out of the war. He stated, "I have said this before, but I shall say it again and again and again; your boys are not going to be sent into any foreign wars." Nevertheless, FDR wanted to support Britain and believed the United States should serve as a "great arsenal of democracy." Churchill pleaded, "Give us the tools and we'll finish the job."

In January 1941, following up on his campaign pledge and the prime minister's appeal for arms, Roosevelt proposed to Congress a new military aid bill. The plan proposed by FDR was to "lend-lease or otherwise dispose of arms" and other supplies needed by any country whose security was vital to the defense of the United States.

In support of the bill, Secretary of War Henry L. Stimson told the Senate Foreign Relations Committee during the debate over lend-lease, "We are buying...not lending. We are buying our own security while we prepare. By our delay during the past six years, while Germany was preparing, we find ourselves unprepared and unarmed, facing a thoroughly prepared and armed potential enemy."

A BILL
Further to promote the defense of the United States, and for other purposes.

(a) The term "defense article" means -

(2) Any machinery, facility, tool, material, or supply necessary for the manufacture, production, processing, repair, servicing, or operation of any article described in this subsection;

(3) Any component material or part of or equipment for any article described in this subsection;

(4) Any agricultural, industrial or other commodity or article for defense.

Such term "defense article" includes any article described in this subsection: Manufactured or procured pursuant to section 3, or to which the United States or any foreign government has or hereafter acquires title, possession, or control.

(b) The term "defense information" means any plan, specification, design, prototype, or information pertaining to any defense article.

SEC. 3. (a) Notwithstanding the provisions of any other law, the President may, from time to time. when he deems it in the interest of national defense, authorize the Secretary Of War, the Secretary of the Navy, or the head of any other department or agency of the Government -

(1) To manufacture in arsenals, factories, and shipyards under their jurisdiction, or otherwise procure, to the extent to which funds are made available therefor, or contracts are authorized from time to time by the Congress, or both, any defense article for the government of any country whose defense the President deems vital to the defense of the United States.

(2) To sell, transfer title to, exchange, lease, lend, or otherwise dispose of, to any such government any defense article, but no defense article not manufactured or procured under paragraph (1) shall in any way be disposed of under this paragraph, except after consultation with the Chief of Staff of the Army or the Chief of Naval Operations of the Navy, or both. The value of defense articles disposed of in any way under authority of this paragraph, and procured from funds heretofore appropriated, shall not exceed $1,300,000,000. The value of such defense articles shall be determined by the head of the department or agency concerned or such other department, agency, or officer as shall be designated in the manner provided in the rules and regulations issued hereunder. Defense articles procured from funds hereafter appropriated to any department or agency of the Government, other than from funds authorized to be appropriated under this Act. shall not be disposed of in any way under authority of this paragraph except to the extent hereafter authorized by the Congress in the Acts appropriating such funds or otherwise.

(3) To test, inspect, prove, repair, outfit, recondition, or otherwise to place in good working order, to the extent to which funds are made available therefor, or contracts are authorized from time to time by the Congress, or both, any defense article for any such government, or to procure any or all such services by private contract.

(5) To release for export any defense article disposed of in any way under this subsection to any such government.

(c) After June 30, 1943, or after the passage of a concurrent resolution by the two Houses before June 30, 1943, which declares that the powers conferred by or pursuant to subsection (a) are no longer necessary to promote the defense of the United States, neither the President nor the head of any department or agency shall exercise any of the powers conferred by or pursuant to subsection (a) except that until July 1, 1946, any of such powers may be exercised to the extent necessary to carry out a contract or agreement with such a foreign government made before July 1, 1943, or before the passage of such concurrent resolution, whichever is the earlier.

(d) Nothing in this Act shall be construed to authorize or to permit the authorization of convoying vessels by naval vessels of the United States.

(e) Nothing in this Act shall be construed to authorize or to permit the authorization of the entry of any American vessel into a combat area in violation of section 3 of the neutrality Act of 1939.

SEC. 4 All contracts or agreements made for the disposition of any defense article or defense information pursuant to section 3 shall contain a clause by which the foreign government undertakes that it will not, without the consent of the President, transfer title to or possession of such defense article or defense information by gift, sale, or otherwise, or permit its use by anyone, not an officer, employee, or agent of such foreign government.

SEC. 5. (a) The Secretary of War, the Secretary of the Navy, or the head of any other department or agency of the Government involved shall when any such defense article or defense information is exported, immediately inform the department or agency designated by the President to administer section 6 of the Act of July 2, 1940 (54 Stat. 714). of the quantities, character, value, terms of disposition, and destination of the article and information so exported.

SEC. 6. (a) There is hereby authorized to be appropriated from time to time, out of any money in the Treasury not otherwise appropriated, such amounts as may be necessary to carry out the provisions and accomplish the purposes of this Act.

(b) All money and all property which is converted into money received under section 3 from any government shall, with the approval of the Director of the Budget. revert to the respective appropriation or appropriations out of which funds were expended with respect to the defense article or defense information for which such consideration is received, and shall be available for expenditure for the purpose for which such expended funds were appropriated by law, during the fiscal year in which such funds are received and the ensuing fiscal year; but in no event shall any funds so received be available for expenditure after June 30, 1946.

SEC. 7. The Secretary of War, the Secretary of the Navy, and the head of the department or agency shall in all contracts or agreements for the disposition of any defense article or defense information fully protect the rights of all citizens of the United States who have patent rights in and to any such article or information which is hereby authorized to be disposed of and the payments collected for royalties on such patents shall be paid to the owners and holders of such patents.

SEC. 8. The Secretaries of War and of the Navy are hereby authorized to purchase or otherwise acquire arms, ammunition, and implements of war produced within the jurisdiction of any country to which section 3 is applicable, whenever the President deems such purchase or acquisition to be necessary in the interests of the defense of the United States.

SEC. 9. The President may, from time to time, promulgate such rules and regulations as may be necessary and proper to carry out any of the provisions of this Act; and he may exercise any power or authority conferred on him by this Act through such department, agency, or officer as be shall direct.

SEC. 10. Nothing in this Act shall be construed to change existing law relating to the use of the land and naval forces of the United States, except insofar as such use relates to the manufacture, procurement, and repair of defense articles, the communication of information, and other noncombatant purposes enumerated in this Act.