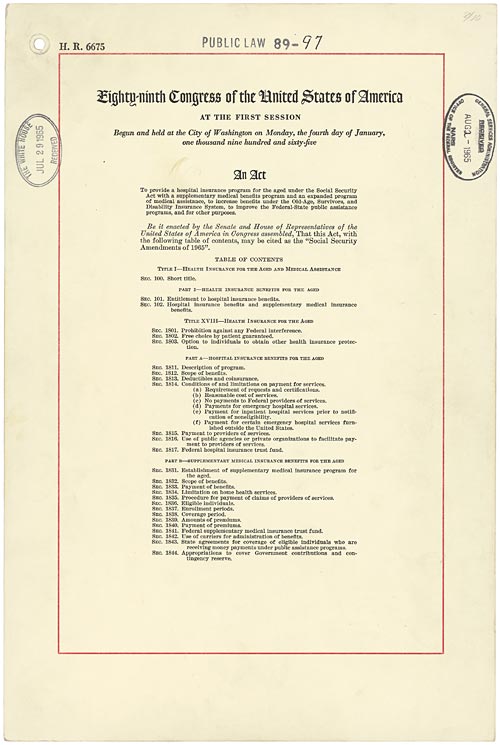 Citation: An act to provide a hospital insurance program for the aged under the Social Security Act with a supplementary medical benefits program and an expanded program of medical assistance, to increase benefits under the Old-Age, Survivors, and Disability Insurance System, to improve the Federal-State public assistance programs, and for other purposes, July 30, 1965; Enrolled Acts and Resolutions of Congress, 1789-; General Records of the United States Government; Record Group 11; National Archives

In 1965, the passage of the Social Security Amendments, popularly known as Medicare and Medicaid, resulted in one basic program of health insurance for persons aged 65 and older, and another program providing health insurance for people with limited income funded by state and federal sources, respectively. It was funded by a tax on the earnings of employees, matched by contributions by employers, and was well received. In the first three years of the program, nearly 20 million beneficiaries enrolled in it.

Debate over the program actually began two decades earlier when President Harry S. Truman sent a message to Congress asking for legislation establishing a national health insurance plan. At that time, vocal opponents warned of the dangers of “socialized medicine.” By the end of Truman’s administration, he had backed off from a plan of universal coverage, but administrators in the Social Security system and others began to focus on the idea of a program aimed at insuring Social Security beneficiaries whose numbers and needs were growing.

The 1950 census showed that the aged population in the United States had grown from 3 million in 1900 to 12 million in 1950. Two-thirds of older Americans had incomes of less than $1,000 annually, and only one in eight had health insurance. Between 1950 and 1963, the aged population grew from about 12 million to 17.5 million, or from 8.1 to 9.4 percent of the U.S. population. At the same time, the cost of hospital care was rising at a rate of about 6.7 percent a year, several times the annual increase in the cost of living, and health care costs were rapidly outpacing growth in the incomes of older Americans.

Private insurers had long considered this illness-prone population a "bad risk.” A broad debate about the need for a social insurance program to provide older Americans with reliable health care coverage started within the Social Security Administration and in Congress. Public hearings were held, and the House of Representatives considered several proposals, but the debate did not intensify until 1960, when it became clear that private insurers were becoming increasingly incapable of providing comprehensive, affordable health care coverage to the rapidly growing population of older adults. Between 1960 and 1965, the health coverage debate was a front burner issue in Congress, with dozens of proposals introduced and testimonies given by representatives of major organizations, including the American Hospital Association, the American Medical Association, and the AFL-CIO.

After Congress passed the legislation in the summer of 1965, President Lyndon Johnson decided to sign the bill with former President Truman at the Truman Presidential Library in Independence, MO, in order to recognize Truman’s early effort to establish a national health insurance program. On July 30, 1965, Air Force One departed for Missouri with the President; Mrs. Johnson; George Meany, president of the AFL-CIO; Secretary of Health, Education and Welfare Anthony Celebrezze; Governor John Connally of Texas; 13 U.S. Senators; and 19 U.S. Representatives. President Johnson and his party were met by President and Mrs. Truman at the Truman Library in Independence. They visited for some time before moving on to the platform in the auditorium of the library for the bill signing. After some brief remarks, President Johnson signed into law the Medicare Social Security Amendments. Johnson gave the first souvenir pen to Mrs. Truman and the next to President Truman and then the remainder of the pens to guests on the platform.

To provide a hospital insurance program for the aged under the Social Security Act with a supplementary medical benefits program and an extended program of medical assistance, to increase benefits under the Old-Age, Survivors, and Disability Insurance System, to improve the Federal-State public assistance programs, and for other purposes.

Be it enacted by the Senate and House of Representatives of the United States of America in Congress assembled, That this Act, with the following table of contents, may be cited as the "Social Security Amendments of 1965".

TITLE I—HEALTH INSURANCE FOR THE AGED AND MEDICAL ASSISTANCE

SHORT TITLE
SEC. 100. This title may be cited as the "Health Insurance for the Aged Act".

SEC. 101. Title II of the Social Security Act is amended by adding at the end thereof the following new section:

"SEC. 226. (a) Every individual who—
" (1) has attained the age of 65, and
" (2) is entitled to monthly insurance benefits under section 202 or is a qualified railroad retirement beneficiary, shall be entitled to hospital insurance benefits under part A of title XVIII for each month for which he meets the condition specified in paragraph (2), beginning with the first month after June 1966 for which he meets the conditions specified in paragraphs (1) and (2).
"(b) For purposes of subsection (a)—
"(1) entitlement of an individual to hospital insurance benefits for a month shall consist of entitlement to have payment made under, and subject to the limitations in, part A of title XVIII on his behalf for inpatient hospital services, post-hospital extended care services, post-hospital home health services, and outpatient hospital diagnostic services (as such terms are defined in part C of title XVIII) furnished him in the United States (or outside the United States in the case of inpatient hospital services furnished under the conditions described in section 1814(f) ) during such months except that (A) no such payment may be made for post-hospital extended care services furnished before January 1967, and (B) no such payment may be made for post- hospital extended care services or post-hospital home health services unless the discharge from the hospital required to qualify such services for payment under part A of title XVIII occurred after June 30, 1966, or on or after the first day of the month in which he attains age 65, whichever is later; and
"(2) an individual shall be deemed entitled to monthly insurance benefits under section 202, or to be a qualified railroad retirement beneficiary, for the month in which he died if he would have been entitled to such benefits, or would have been a qualified railroad retirement beneficiary , for such month had he died in the next month.

" (c) For purposes of this section, the term 'qualified railroad retirement beneficiary' means an individual whose name has been certified to the Secretary by the Railroad Retirement Board under section 21of the Railroad Retirement Act of 1937. An individual shall cease to be a qualified railroad retirement beneficiary at the close of the month preceding the month which is certified by the…