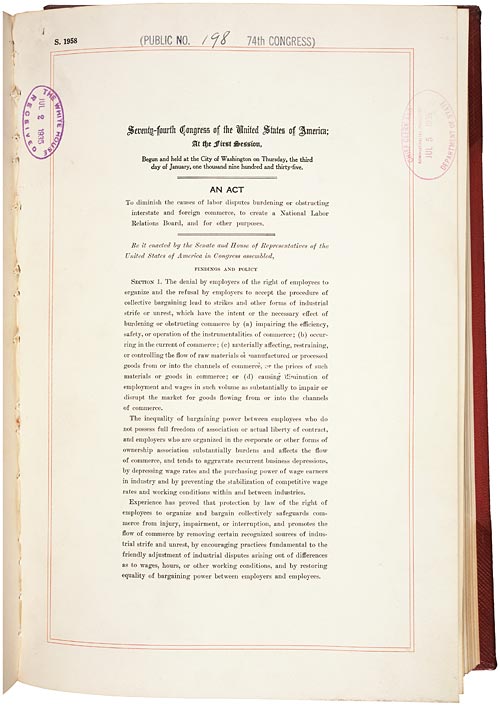 Citation: An act to diminish the causes of labor disputes burdening or obstructing interstate and foreign commerce, to create a National Labor Relations Board, and for other purposes, July 5, 1935; General Records of the United States Government; Record Group 11; National Archives.

Also known as the Wagner Act, this bill was signed into law by President Franklin Roosevelt on July 5, 1935. It established the National Labor Relations Board and addressed relations between unions and employers in the private sector.

After the National Industrial Recovery Act was declared unconstitutional by the Supreme Court, organized labor was again looking for relief from employers who had been free to spy on, interrogate, discipline, discharge, and blacklist union members. In the 1930s, workers had begun to organize militantly, and in 1933 and 1934, a great wave of strikes occurred across the nation in the form of citywide general strikes and factory takeovers. Violent confrontations occurred between workers trying to form unions and the police and private security forces defending the interests of anti-union employers.

In a Congress sympathetic to labor unions, the National Labor Relations Act (NLRA) was passed in July of 1935. The broad intention of the act, commonly known as the Wagner Act after Senator Robert R. Wagner of New York, was to guarantee employees “the right to self-organization, to form, join, or assist labor organizations, to bargain collectively through representatives of their own choosing, and to engage in concerted activities for the purpose of collective bargaining or other mutual aid and protection.” The NLRA applied to all employers involved in interstate commerce except airlines, railroads, agriculture, and government.

In order to enforce and maintain those rights, the act included provisions for the National Labor Relations Board (NLRB) to arbitrate deadlocked labor-management disputes, guarantee democratic union elections, and penalize unfair labor practices by employers. To this day, the board of five members, appointed by the President, is assisted by 33 regional directors. The NLRB further determines proper bargaining units, conducts elections for union representation, and investigates charges of unfair labor practices by employers. Unfair practices, by law, include such things as interference, coercion, or restraint in labor’s self-organizing rights; interference with the formation of labor unions; encouragement or discouragement of union membership; and the refusal to bargain collectively with a duly chosen employee representatives.

The constitutionality of the NLRA was upheld by the United States Supreme Court in National Labor Relations Board v. Jones & Laughlin Steel Corp. in 1937. The act contributed to a dramatic surge in union membership and made labor a force to be reckoned with both politically and economically. Women benefited from this shift to unionization as well. By the end of the 1930s, over 800,000 women belonged to unions, a threefold increase from 1929. The provisions of the NLRA were later expanded under the Taft-Hartley Labor Act of 1947 and the Landrum-Griffin Act of 1959.