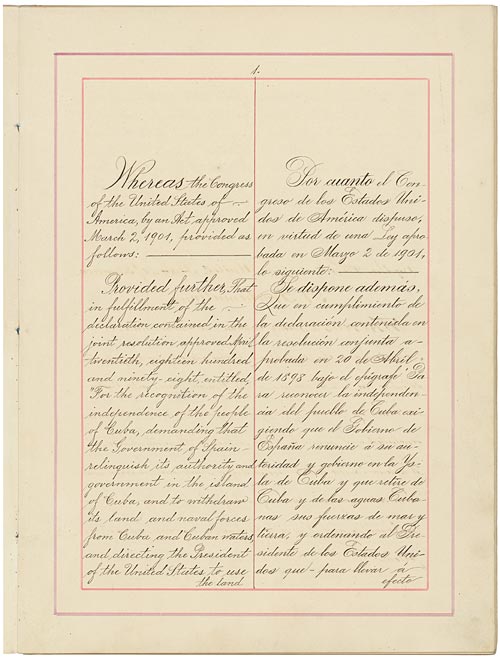 Citation: Treaty Between the United States and the Republic of Cuba Embodying the Provisions Defining Their Future Relations as Contained in the Act of Congress Approved March 2, 1901; 5/22/1903; Perfected Treaties, 1778 - 1945; General Records of the United States Government, Record Group 11; National Archives Building, Washington, DC.

Approved on May 22, 1903, the Platt Amendment was a treaty between the U.S. and Cuba that attempted to protect Cuba's independence from foreign intervention. It permitted extensive U.S. involvement in Cuban international and domestic affairs for the enforcement of Cuban independence.

U.S. victory in the Spanish-American War of 1898 produced a peace treaty that compelled Spain to relinquish control of several overseas territories, including Cuba (see the de Lôme letter). In April of 1898, Senator Henry M. Teller of Colorado proposed an amendment to the U.S. declaration of war against Spain, which stated that the United States would not establish permanent control over Cuba. The Teller Amendment asserted that the United States "hereby disclaims any disposition of intention to exercise sovereignty, jurisdiction, or control over said island except for pacification thereof, and asserts its determination, when that is accomplished, to leave the government and control of the island to its people." The Senate adopted the amendment on April 19.

When the Constitutional Convention of Cuba started its deliberations in July 1900, it received notification that the U.S. Congress intended to attach an amendment to the Cuban Constitution. The following year, Secretary of War Elihu Root drafted a set of articles as guidelines for future United States–Cuba relations. This set of articles became known as the Platt Amendment, after Senator Orville Platt of Connecticut, who presented it. Platt was a U.S. senator from 1879 to 1905 and influenced the decision to annex Hawaii and occupy the Philippines. As chair of the Senate Committee with Relations on Cuba, he sponsored the amendment as a rider attached to the Army Appropriations Bill of 1901. Cubans reluctantly included the amendment, which virtually made Cuba a U.S. protectorate, in their constitution. The Platt Amendment was also incorporated in a permanent treaty between the United States and Cuba.

The Platt Amendment stipulated the conditions for U.S. intervention in Cuban affairs and permitted the United States to lease or buy lands for the purpose of establishing naval bases (the main one was Guantánamo Bay) and coaling stations in Cuba. It barred Cuba from going into debt, making a treaty that would give another nation power over its affairs, or stopping the United States from imposing a sanitation program on the island. Specifically, Article III required that the government of Cuba consent to the right of the United States to intervene in Cuban affairs for “the preservation of Cuban independence, the maintenance of a government adequate for the protection of life, property, and individual liberty, and for discharging the obligations with respect to Cuba imposed by the Treaty of Paris on the United States, now to be assumed and undertaken by the Government of Cuba.”

The Platt Amendment supplied the terms under which the United States intervened in Cuban affairs in 1906, 1912, 1917, and 1920. By 1934, rising Cuban nationalism and widespread criticism of the Platt Amendment resulted in its repeal as part of Franklin D. Roosevelt's Good Neighbor policy toward Latin America. The United States, however, retained its lease on Guantánamo Bay, where a naval base remains in operation today.

Whereas the Congress of the United States of America, by an Act approved March 2, 1901, provided as follows:

Provided further, That in fulfillment of the declaration contained in the joint resolution approved April twentieth, eighteen hundred and ninety-eight, entitled "For the recognition of the independence of the people of Cuba, demanding that the Government of Spain relinquish its authority and government in the island of Cuba, and withdraw its land and naval forces from Cuba and Cuban waters, and directing the President of the United States to use the land and naval forces of the United States to carry these resolutions into effect," the President is hereby authorized to "leave the government and control of the island of Cuba to its people" so soon as a government shall have been established in said island under a constitution which, either as a part thereof or in an ordinance appended thereto, shall define the future relations of the United States with Cuba, substantially as follows:

"I.-That the government of Cuba shall never enter into any treaty or other compact with any foreign power or powers which will impair or tend to impair the independence of Cuba, nor in any manner authorize or permit any foreign power or powers to obtain by colonization or for military or naval purposes or otherwise, lodgement in or control over any portion of said island."

"II. That said government shall not assume or contract any public debt, to pay the interest upon which, and to make reasonable sinking fund provision for the ultimate discharge of which, the ordinary revenues of the island, after defraying the current expenses of government shall be inadequate."

"III. That the government of Cuba consents that the United States may exercise the right to intervene for the preservation of Cuban independence, the maintenance of a government adequate for the protection of life, property, and individual liberty, and for discharging the obligations with respect to Cuba imposed by the treaty of Paris on the United States, now to be assumed and undertaken by the government of Cuba."

"IV. That all Acts of the United States in Cuba during its military occupancy thereof are ratified and validated, and all lawful rights acquired thereunder shall be maintained and protected."

"V. That the government of Cuba will execute, and as far as necessary extend, the plans already devised or other plans to be mutually agreed upon, for the sanitation of the cities of the island, to the end that a recurrence of epidemic and infectious diseases may be prevented, thereby assuring protection to the people and commerce of Cuba, as well as to the commerce of the southern ports of the United States and the people residing therein."

"VI. That the Isle of Pines shall be omitted from the proposed constitutional boundaries of Cuba, the title thereto being left to future adjustment by treaty."

"VII. That to enable the United States to maintain the independence

of Cuba, and to protect the people thereof, as well as for its own defense, the government of Cuba will sell or lease to the United States lands necessary for coaling or naval stations at certain specified points to be agreed upon with the President of the United States."

"VIII. That by way of further assurance the government of Cuba will embody the foregoing provisions in a permanent treaty with the United States."