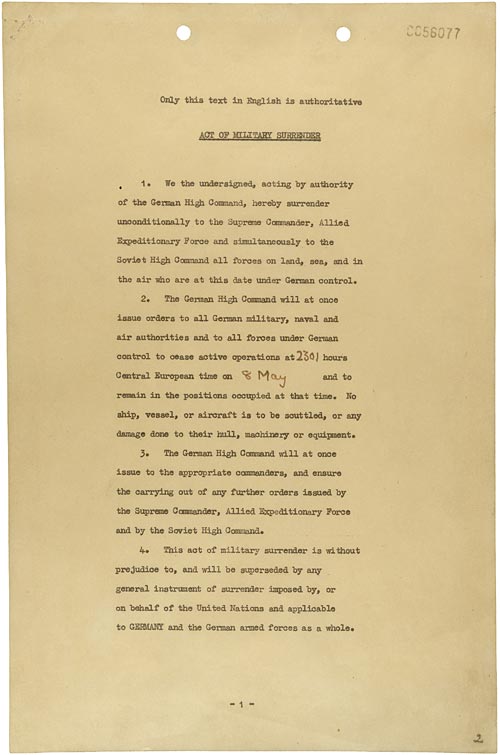 This instrument of surrender was signed on May 7, 1945, at Gen. Dwight D. Eisenhower's headquarters in Reims by Gen. Alfred Jodl, Chief of Staff of the German Army.

The unconditional surrender of the German Third Reich was signed in the early morning hours of Monday, May 7, 1945, at Supreme Headquarters, Allied Expeditionary Force (SHAEF) at Reims in northeastern France.

General Alfred Jodl, Chief of Staff of the German Army, signed three other surrender documents at the same time, one each for Great Britain, Russia, and France.

Present were representatives of the four Allied Powers – France, Great Britain, the Soviet Union, and the United States – and the three German officers delegated by German President Karl Doenitz. These were: Gen. Alfred Jodl, who alone had been authorized to sign the surrender document; Maj. Wilhelm Oxenius, an aide to Jodl; and Adm. Hans-Georg von Friedeburg, one of the German chief negotiators.

Lt. Gen. Walter Bedell Smith, SHAEF chief of staff, led the Allied delegation as the representative of General Eisenhower. Eisenhower refused to meet with the Germans until the surrender had been accomplished. Other American officers present were Maj. Gen. Harold R. Bull and Gen. Carl Spaatz.

After the signing of the Reims accord, Soviet chief of staff Gen. Alexei Antonov expressed concern to SHAEF that the continued fighting in the east between Germany and the Soviet Union made the Reims surrender look like a separate peace. The Soviet command wanted the Act of Military Surrender, with certain additions and alterations, to be signed at Berlin. To the Soviets, the documents signed at Berlin on May 8, 1945, represented the official, legal surrender of the Third Reich. But the Berlin document had few significant changes from the one signed a day earlier at Reims.

Only this text in English is authoritative

We the undersigned, acting by authority of the German High Command, hereby surrender unconditionally to the Supreme Commander, Allied Expeditionary Forces and simultaneously to the Soviet High Command all forces on land, sea and in the air who are at this date under German control.

The German High Command will at once issue orders to all German military, naval and air authorties and to all forces under German control to cease active operations at 2301 hours Central European time on 8 May and to remain in the positions occupied at that time. No ship, vessel, or aircraft is to be scuttled, or any damage done to their hull, machinery or equipment.

The German High Command will at once issue to the appropriate commander, and ensure the carrying out of any further orders issued by the Supreme Commander, Allied Expeditionary Force and by the Soviet High Command.

This act of military surrender is without prejudice to, and will be superseded by any general instrument of surrender imposed by, or on behalf of the United Nations and applicable to GERMANY and the German armed forces as a whole.

In the event of the German High Command or any of the forces under their control failing to act in accordance with this Act of Surrender, the Supreme Commander, Allied Expeditionary Force and the Soviet High Command will take such punitive or other action as they deem appropriate.

IN THE PRESENCE OF

On behalf of the Supreme Commander,
Allied Expeditionary Force.
W. B. SMITH

On behalf of the Soviet High Command
SOUSLOPAROV