A section of the Essex County, Massachusetts, 1810 census records recently turned over to the National Archives documented the residents of Salem during what was only the third census. A note in the margin of one section indicates that families in the northwest ward included those of John Chadwick, Jenna Jacobs, and Andrew Thomson in the column for "colored people" and of Sam Brown, David McKeen, and Elijah Towne under white households.

WASHINGTON, June 14, 2021 ‚Äî Local 1810 census records from Massachusetts, long missing from the collection of census records of the time, are finally in Washington, DC, after a 211-year delay, thanks to a social media post.

Family researchers and history scholars can now view the digitized version through the National Archives Catalog.

Jack Kabrel, an archives specialist with the Permanent Records Capture team and based at the National Archives at Boston, originally saw the post and reported it.

"The Permanent Records Capture team strives to work across various units to fulfill NARA's mission,‚Äù Kabrel said. ‚ÄúThe 1810 census recovery was a perfect example of those units communicating and taking action to secure and protect an important part of America's past. This is a moment we can all be proud of."

Suspecting the records might be federal property and belong in the National Archives, the archives specialist flagged the post for supervisors. This set in motion the protocols the agency‚Äôs Holdings Protection and Recovery team and General Counsel use to address cases of records that may need to be reclaimed.

Researchers, collectors, or dealers often flag cases of missing federal property. In this and other instances, National Archives staff verify the origin of the records and decide whether they should be in the care of the National Archives.

Two long-time National Archives archivists determined that the marbled indigo notebook used by Assistant Marshal Ebenezer Burrell during the enumeration of Salem, Essex County, Massachusetts, between August 6, 1810, and August 29, 1810, indeed was an official record that belonged in the National Archives. 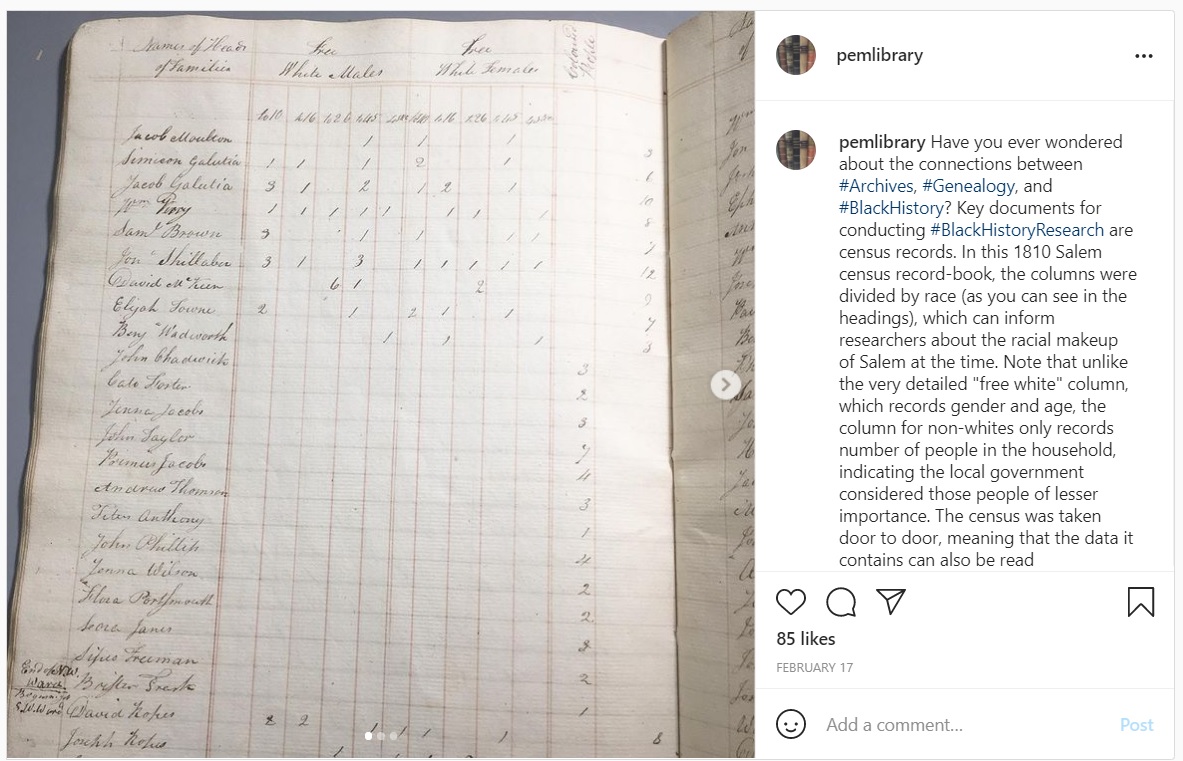 A February post from the Peabody Essex Museum Library spotted by a National Archives and Records Administration employee set in motion the handover of 1810 census records after a 221-year delay.

Gary M. Stern, National Archives General Counsel, alerted the Peabody Essex Museum Library that this ledger, which they obtained between 1810 and the 1940s, would need to be handed over to the federal agency.

‚ÄúI think the history was that the censuses would accumulate for 20 or 30 years before being sent to Washington. These never made it here,‚Äù Stern said. In this case, the Boston-area museum staff ‚Äúwas willing to cooperate right away,‚Äù he added.

With facilities shuttered due to the COVID-19 pandemic, Alfie Paul, Director of Archival Operations at National Archives at Boston, drove 30 minutes from his home to the PEM facility in Rowley, MA, to take custody of the records.

‚ÄúThe trip should have been easy,‚Äù Paul said, ‚ÄúHowever, we had a rare April snow that made traffic a nightmare. Dan Lipcan of the Peabody Essex Museum met me in the lobby with the volume in an archival box wrapped in two plastic bags to protect it from the snow.‚Äù

Paul transported the records to the National Archives facility in nearby Waltham. In May, they were sent to Washington, DC.

‚ÄúThe condition of the records was remarkably good, considering the age of the record and its delicate condition,‚Äù archives specialist Joe Keefe told National Archives News.

The 13 unnumbered columns included the names of the heads of families, a breakdown of free white males and females by age, and one column for the number of ‚Äúcolored‚Äù people.

Burrell did not include a column for the number of enslaved people since Massachusetts abolished slavery in 1783.

‚ÄúWe have received numerous questions over the years about the missing 1810 census in Salem. This is a piece of history which has been lost for some time to researchers and will help genealogical researchers as well as give historians a clearer picture of the social conditions and population of Salem in the early republic,‚Äù Keefe said.

Researchers can find these and additional census records held by the National Archives through the web portal.