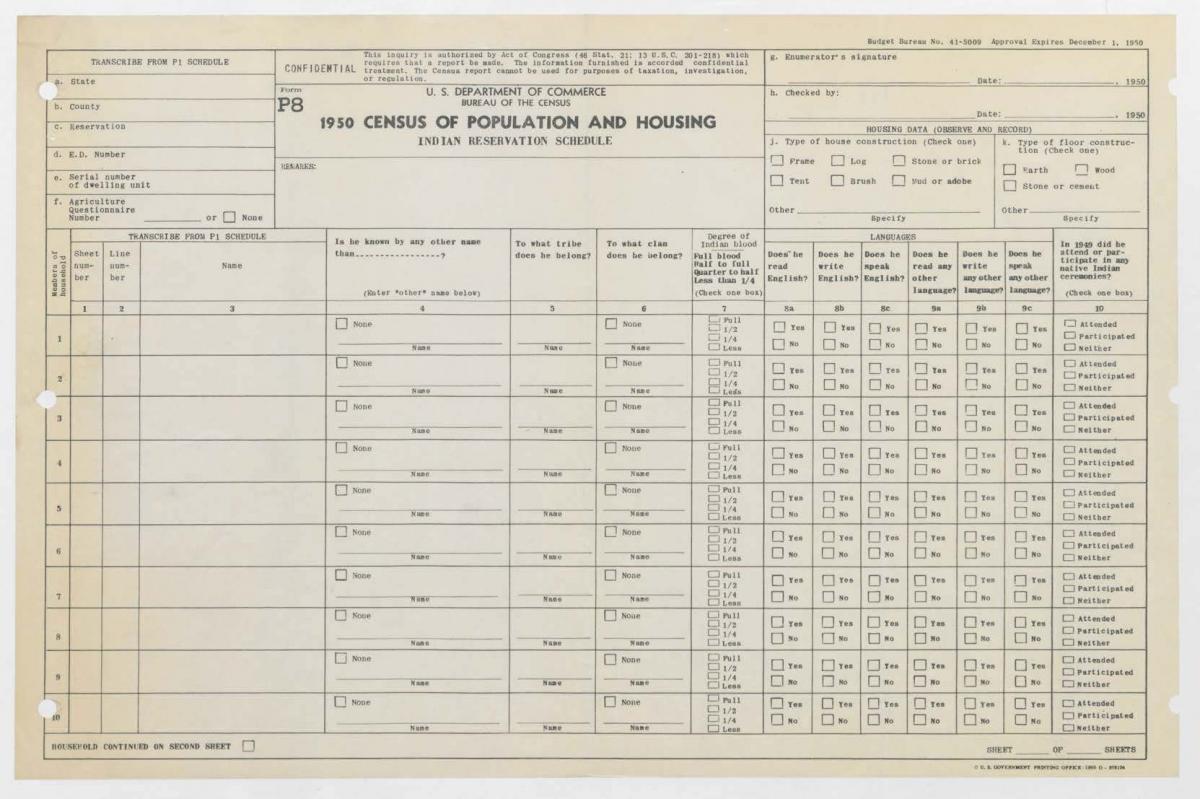 A blank example of the Form P8 Indian Reservation Schedule. In April 2022, nearly 33,000 of these schedules from nearly 100 reservations across the lower 48 states will be released along with the general population schedules from the 1950 Census.

WASHINGTON, February 2, 2022 — In 1950, as enumerators fanned out across the United States to tally the population for the first time in a decade, the federal government had specific questions for residents of certain Native American reservations: Were they reading, writing, or speaking English? Were they participating in Native ceremonies?

Cody White, archivist and subject matter expert for Native American–related records at the National Archives and Records Administration, set out to explore the history and context of the Form P8, Indian Reservation Schedule, in the 1950 Census to better understand why the Census Bureau created an entirely separate form to be used in some communities.

As White explains, “While every Native American was enumerated on the standard Form P1, 1950 Census of Population and Housing, that was used across the entire United States, the Form P8, Indian Reservation Schedule, was not conducted on every reservation.”

The P8 forms, among other population schedules, will be released to the public on April 1, 2022, in accordance with the 72-year rule.

Researchers interested in genealogy may also find questions about clan affiliation and additional names used by residents helpful in their research.

Although the census population schedules from 1950 will not be viewable by the public until April 1, documents pertaining to the administrative aspects of the census are not subject to the same lengthy waiting period.

Consequently, White was able to find records relating to the creation and funding of the Indian Reservation Schedule. He notes a memorandum from the Census Bureau to the Bureau of Budget in February 1950:

In the first paragraph, the Census Bureau wrote that the BIA needed the information that would be collected by the P8 schedule “in connection with their present program in aiding Indian citizens to become economically self-sustaining and in order to lessen or remove governmental supervision.”

Read the full piece, “The Story of the 1950 Census P8 Indian Reservation Schedule,” and see additional documents referenced by White—including partial lists of which reservations were tallied—on the Text Message blog.

The National Archives is scheduled to release the records of the 1950 Census on April 1, 2022. Bookmark www.archives.gov/1950Census to stay updated on the latest information. Join the conversation about the 1950 Census and broader genealogy questions on NARA’s History Hub.