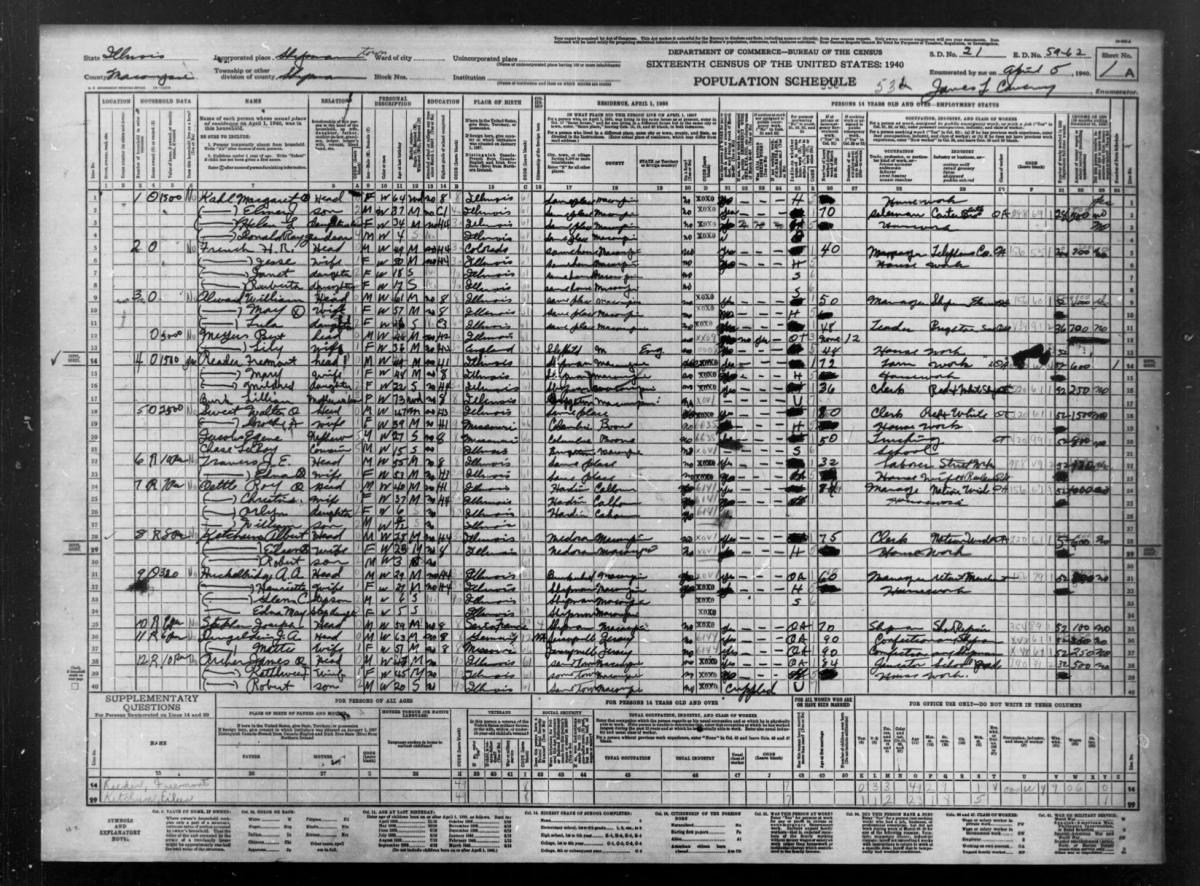 ST. LOUIS, February 1, 2022 — The National Archives at St. Louis is uniquely positioned to benefit from the public release of the 1950 Census on April 1. The holdings at St. Louis include the military personnel records of individuals who separated from service more than 62 years ago, as well as the civilian personnel records of former federal employees who separated prior to 1952. Census records have long been an important resource for archives staff to help locate a requested individual’s record.

“Census records are often consulted when we’re having trouble locating a record for a requester,” explained Corey Stewart, a reference supervisor at the National Archives and Records Administration (NARA). “This is especially true if the requester is unclear on details of the individual they are seeking. The census can help us pinpoint important details about the individual’s life, which can lead us to the record.”

The National Archives and Records Administration has been seriously impacted by the pandemic, resulting in a large backlog of records requests and limited ability to permit researchers to use facilities, However, Stewart is hopeful that these census records, which will be released online, will provide interesting information and prove very useful in the years to come.

Below is a question and answer series with Stewart about how the upcoming 1950 Census release might expand access.

St. Louis is known for military records, but if I’m not looking for a veteran, can the 1950 Census still help me find records for family members there?

Absolutely! The record holdings at the National Archives at St. Louis consist of more than just military records, and the 1950 Census can certainly assist in pursuing them. Among our holdings are Official Personnel Folders (OPFs) for many individuals employed by the federal government, and it just so happens that the 1950 Census had a question related to federal employment! The 1950 Census notes "G" for Government for the “Class of Worker," and the enumerator was instructed to write down whether the agency the person worked for was federal, state, county, city, and so forth. In the same way, some males were asked about military service, and which war, but not which branch of service. But simply having the confirmation of government service, as well as the other information provided by the census, could lead us to locate a folder for the individual.

What information can you glean from various data collected on census records in order to enhance your searches of your holdings?

One of my favorite uses of census data stems from New Deal Relief programs—most notably, the Work Projects Administration (WPA). These records require not just the name of the individual, but also where they lived at the time of employment. The 1940 Census has proven to be extremely useful in helping aim our search in the right direction. Not only does it also have the same Class of Worker question found on the 1950 Census, it will in some cases have WPA listed for employment. For some researchers who weren’t previously aware of any federal or military service of the individual they are researching, the census becomes the take-off point for requesting records. Beyond that, the 1940 Census has the current address as well as the individual’s address in 1935, which allows us to better gauge employment location.

Do you have a favorite bit of data the census records capture? What kinds of census questions do you find most helpful with your line of work? Why?

Honestly, it depends on what in particular I’m researching. I love addresses and seeing how much people moved and how far they could go in 10-year increments. How many people took in lodgers is another statistic I find fascinating. As a student of history, reading and learning and understanding the economic condition is one thing; seeing the names of multiple lodgers in one house is quite another. Another type of data I love (and get cranky regarding) is name changes. To see the evolution of a name from the point someone first stepped off the boat to their children and grandchildren tweaking the spelling to a modern or “acceptable” version.

How is the 1950 date significant to your holdings?

1950 is a huge date for a number of reasons. First, this is the census following World War II. As many a frustrated researcher (not to mention our own staff) is aware, there was an epic, horrendous loss experienced in 1973 when the sixth floor of the National Personnel Records Center burned for four and a half days, destroying some 16–18 million Official Military Personnel Records for the Army and Air Force. Army personnel in 1945 alone numbered over 8 million, and while the tragic loss covered a period from 1912 to 1960, the estimated loss of Army records is 80 percent. What does this have to do with the 1950 Census? That’s another reason 1950 is significant to our holdings, because of its overlap with the service period of records affected by the fire. It’s because of the possibility that “service” is listed as the kind of work an individual is doing. Beyond those reasons, the information found in the census could lead to other records that could list military service, such as Selective Service. Not interested in military records? Our collection of Civilian Agency records run through 1951, which is an indication of government employment that could lead to an Official Personnel Folder!

It represents a new starting point for researchers who haven’t gotten any traction in the past. It’s closer to now, closer to what they know, closer to opening fully that door to the past they haven’t been able to get beyond.

Are there any new or different questions related to individuals you would like to see on census records?

As a historian and a researcher… as a human being, I want to know everything! I want to know what their dreams and aspirations were, their disappointments and perceived failures. How the path they walked through life differed from where they were determined to be when they were 5, then 25, then 55. I want the whole person behind the name. In short, I want the impossible. However, the census is a nice snapshot in time, not only is it a spotlight into a life at that one instance, but if you step back and view the whole, you see that it is a snapshot into society. It highlights the topics deemed important enough to capture at that particular moment in time. A peek into the mindset of society. I can’t help but wonder—would the 2020 Census have looked different if COVID-19 had swept across the United States two years before it did?