WASHINGTON, November 22, 2019 — Three photo historians combed through National Archives holdings to compile a book of photographs taken by World War II military photographers, giving people a glimpse into the devastation and destruction of that conflict. 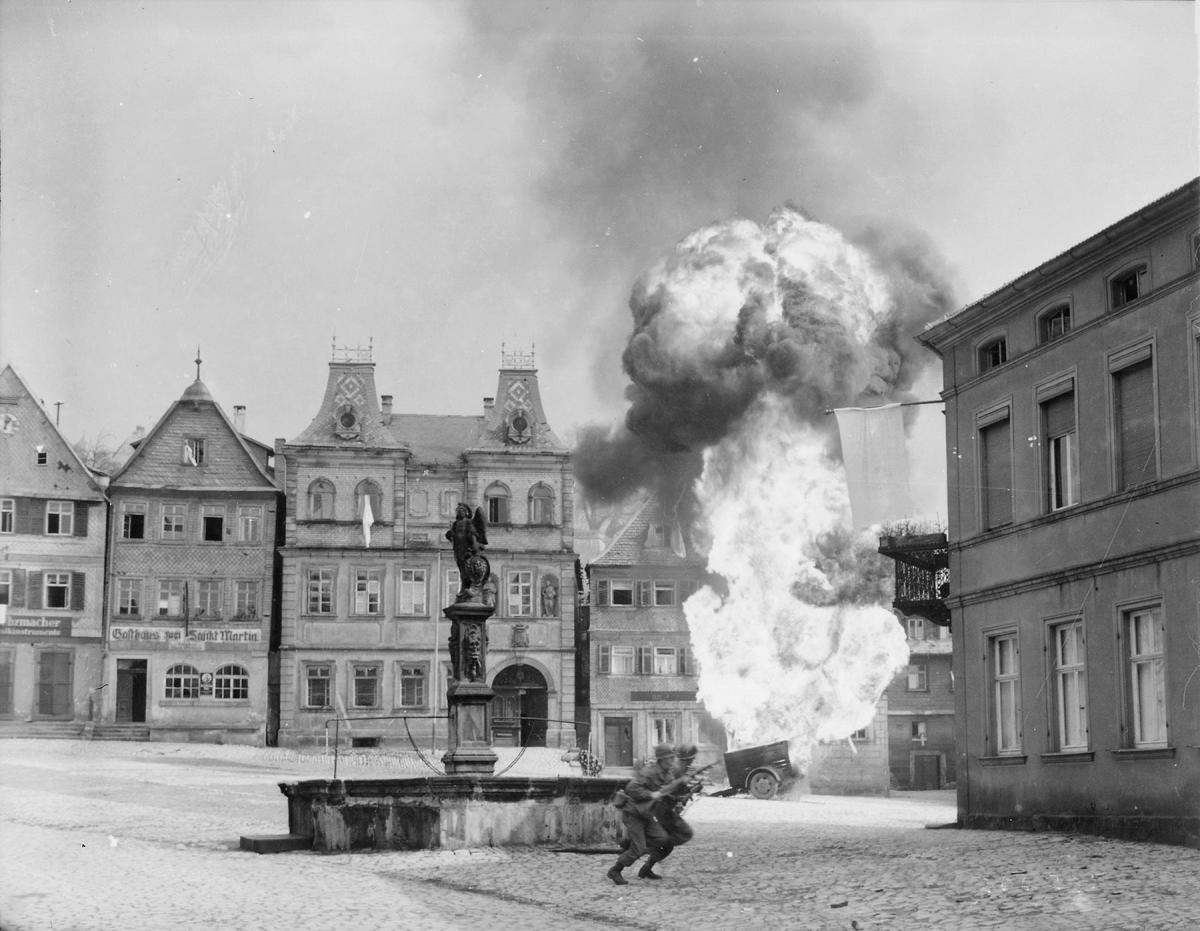 Richard Cahan and Mark Jacob, co-authors of Aftershock: The Human Toll of War, discussed their book and the work of U.S. Army Signal Corps photographers in World War II during a panel presentation at the National Archives in Washington, DC, on November 14. The book is a compendium of Signal Corps photographs taken in the final year of World War II that the authors individually scanned from original negatives in the National Archives holdings.

Cahan is a former picture editor for the Chicago Sun-Times and the author of 24 books on history and photography. Jacob is a former editor for the Chicago Tribune and an author of eight books on history and photography. Michael Williams, the third co-author, a writer, designer, and publisher who produced more than a dozen books and co-authored eight, could not attend the event.

“The Army Signal Corps photographic collection is one of the largest in the National Archives Still Picture Branch. The roughly one million images covering World War One through 1981 chronicle military activities during war and peace, on the front line and on the homefront,” Archivist of the United States David Ferreiro said during his opening remarks at the event. “In this Veterans Day tribute, we remember and honor the soldier photographers who, through their images, were a witness to the postwar destruction in a world forever changed.”

Presented in partnership with the U.S. Army Center of Military History, the panel event highlighted the book Aftershock: The Human Toll of War.

Many digitized images captured by the Signal Corps in 1945 can be viewed through the National Archives Catalog. A selection of these photographs can be viewed in the photo gallery below. Because the photographs were taken by military personnel while on duty they are considered to be in the public domain.

“These Signal Corps photo teams—carrying what was then state-of-the-art equipment—would go out into combat operations and cover the events where civilian journalists either wouldn’t go or couldn’t go,” Reynolds said. “The results captured on film through their lenses were some of the most iconic pictures of World War II. These images were used not only by the U.S. Army but also in newspapers and magazines and films throughout the United States and around the world.”

Villard, who serves as the Center of Military History’s digital historian and the U.S. Army’s principal Vietnam War historian, was the event’s moderator.

The Signal Corps photographic collection provides “a rich source of information and tell us so much about the experience of the soldier in the war that we couldn't get anywhere else,” Villard said. “I am pleased tonight to be moderating a panel of experts who will tell us more about this incredible part of Army history in the Second World War that I think is not well known but really ought to be.”

Villard noted the importance of photos as historical documents.

“The Army Signal Corps photo collection is one of the great national treasures,” Villard said. “I think most historians don’t give photographs the proper due. I think there’s a wealth of information; I personally have learned so much by spending so much time with the photographs . . . but there’s just something about those images and the information they contain.”

Cahan spoke about the origin of the book project.

“We started about three years ago, and the reason we chose the Army Signal Corps was that the Army was on every continent and on the ground during World War II,” Cahan said. “So, even though the Navy, the Marines, and the Coast Guard produced great photographs, we thought that there was a continuity among Army photographs.

“In Signal Corps photographs, we decided to concentrate on 1945 because many of the still photos and the films that Signal Corps photographers took of 1943 and 1944—the action photos that we are all aware of—they've been shown in a lot of books. When 1945 came around and the war started waning, there wasn’t as much attention given to this time, ” he said.

Cahan further explained that Aftershock is “about men—and they were all men—in World War II who went to war with cameras instead of guns. The truth of it was they were provided sidearms, but as every photographer said, ‘there was no way to shoot pictures and shoot guns at the same time.’ And they all chose to use their cameras. . . . The subtitle of the book is The Human Toll of War, and [the photographers] show us exactly that. . . . There were about 70 photographers who took the 300 pictures in the book, and we tracked down the story of almost every one of them.” 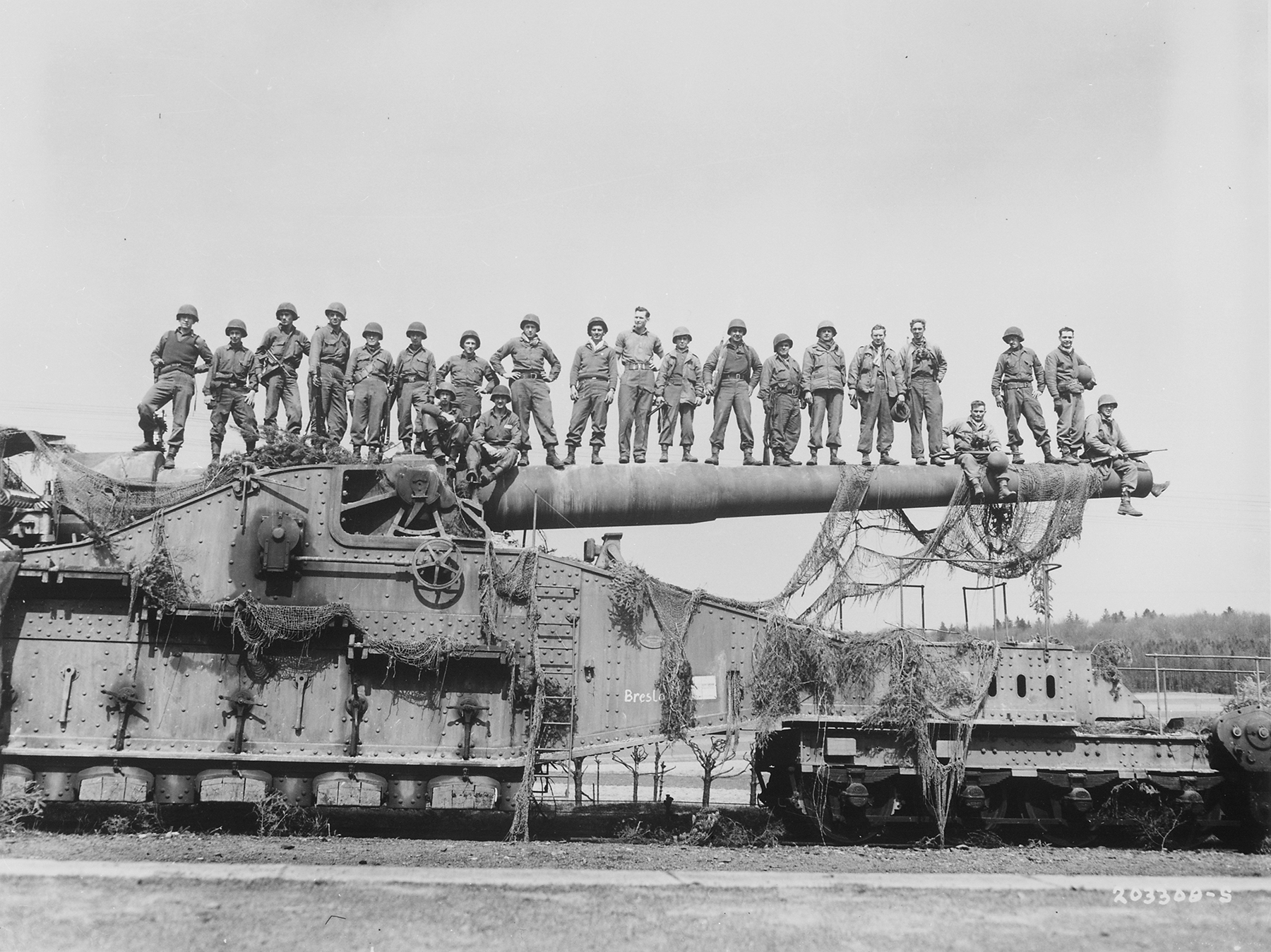 Twenty-two men from the U.S. 7th Army are lined up on the barrel of a German 274mm railroad gun captured near Rentwertshausen. (National Archives Identifier 531256)

Members of a tank destroyer crew play craps while they wait for a roadblock to be removed on the road to Eisfeld, Germany. (National Archives Identifier 6927819)

A Russian slave laborer, who was among the prisoners liberated by the 3rd Armored Division, points out former Nazi guard who brutally beat prisoners. (National Archives Identifier 531262)

Starved prisoners pose in a concentration camp in Ebensee, Austria, after it was liberated by the 80th Division. The camp was reputedly used for "scientific" experiments. (National Archives Identifier 531271)

Jacob talked about the impact of the photograph they selected for the book’s cover.

“Our cover photo, which we think goes great with the title of Aftershock, is Pvt. 1st Class Jack Pulliam, a Pennsylvania kid who was an infantry soldier and was captured in the Battle of the Bulge,” Jacob said. “He was taken back to Germany to work slave labor, and after about a month, he escaped with a comrade and hid in a house in Germany. A German officer came in, and William killed him to remain free. As the Allies were coming through, they found him, and this is him right after that. He’s wearing the cap of the German officer whom he killed and he’s got this thousand-yard stare, he’s got the most exhausted face I’ve ever seen, and he just looks like he’s been through what the whole world had been through for years.”

Raines pointed out the context of the Signal Corps’ work in World War II.

“The outbreak of World War II created a huge demand for photography and required the Signal Corps to really up its operations in that area,” Raines said. “The War Department finally issued regulations that gave responsibility to the Signal Corps for all photographic work except that specifically assigned to other arms and branches, so it received a pretty broad authority. This time, the emphasis was placed on combat photography.

“The Army tried to draft professional photographers . . . [but] the need outstripped the supply. . . . To meet the demand, the Signal Corps conducted training in Astoria [NY] for both still and motion picture cameramen in New York City. The center also trained the many specialists required for photographic work, such as camera repairmen, maintenance personnel, and laboratory technicians,” she said.

The Signal Corps further expanded in 1943, Raines noted, and by the end of World War II, combat photography had provided a wealth of still pictures and motion pictures alike. However, although Aftershock presents some graphic images, censorship of similar images taken during World War Two would not allow such images to be shown to the general public. Despite this restriction, Raines said, “The public received a much more realistic look at warfare than they’d ever had before.”

Enriquez provided insight into how the U.S. Army Signal Corps photograph collection is organized at the National Archives:

The Army Signal Corps collection is our largest collection, and it is the most used collection. The Army Signal Corps photographs were transferred to the National Archives in four trunks—we call them accessions—so they came in four years. In reading the paperwork I gathered in preparation for tonight’s event, there was a really interesting quote I found, and I want to read it: "This material is a part of the oldest continuous photographic file in the history of the government, and the best-known file because of its coverage of military operations of the United States. Therefore, the importance of the records need not be stressed." That’s a lot to say because we have over 18 million photographs, and this is the oldest and largest collection.

Enriquez noted that there are inherent limitations that could make finding specific records difficult.

“I always like to start with setting expectations, and things that you don't find in the Signal Corps collection or a lot of our military records is that we do not have a photo of every single person who has served in the military,” Enriquez said. “If you’re looking for a specific unit, having the unit lineage helps because you can look under the hierarchy of it.”