Do Records Show Proof of UFOs?

WASHINGTON, February 9, 2018 —  Ever wonder if we are alone in this universe?

Over the years, many researchers and scientists have scoured government documents at the National Archives in search of proof that life exists beyond Earth.

The National Archives and Records Administration is actually home to several collections of documents pertaining to unidentified flying objects (UFOs) or “flying disks.” And over the decades, those resources have been thoroughly probed and scrutinized for even a hint of more information and proof of alien existence.

One set of documents, known as Project Blue Book, includes retired, declassified records from the United States Air Force (USAF), currently in the custody of the National Archives. It relates to the USAF investigations of UFOs from 1947 to 1969.

According to a US Air Force Fact Sheet, a total of 12,618 sightings were reported to Project Blue Book during this time period. Of those, 701 remained “unidentified.”  The project — once headquartered at Wright-Patterson Air Force Base, Ohio — officially ended in 1969.

The subject of UFOs has long fascinated National Archives staff members as well. In a July 15, 2017, National Archives The Text Message blog post, “See Something, Say Something”: UFO Reporting Requirements, Office of Military Government for Bavaria, Germany, May 1948 archivists Greg Bradsher and Sylvia Naylor share a brief history of Project Blue Book, the project’s alternative names over the course of its existence, and some information on the infamous Roswell, New Mexico, UFO incident.

All of Project Blue Book documentation is available on 94 rolls of microfilm (T1206) with the case files and the administrative records. These records are available for examination in the National Archives Microfilm Reading Room at the National Archives in College Park, Maryland. Motion picture film, sound recordings, and some still pictures are maintained by the Motion Picture & Sound & Video Branch and the Still Picture Branch.  There is even a Project Blue Book webpage so researchers can access online more than 50,000 official U.S. Government documents relating to the UFO phenomenon.

Richard Peuser, chief of textual reference operations at the National Archives at College Park, Maryland, said the agency has seen a steady amount of interest in files dealing with UFOs, responding to “a few hundred or so requests” over the years.

"Sometimes the same person would write multiple times hoping for a different answer,” Peuser continued.  “Many felt that the records were too benign and that the Government [must be] ‘hiding’ the real stuff.  Often there were allegations of coverup of deliberately hiding or destroying the documents.”

Peuser said, “The National Archives still gets a fair amount of inquiries relating to UFO's and folks have come in looking for other records in accessioned US Air Force records in particular. So, Roswell, Area 51, Majestic-12, Projects Mogul, Sign, Grudge, and Twinkle continue to fascinate and draw researchers to examine our holdings for aliens.” 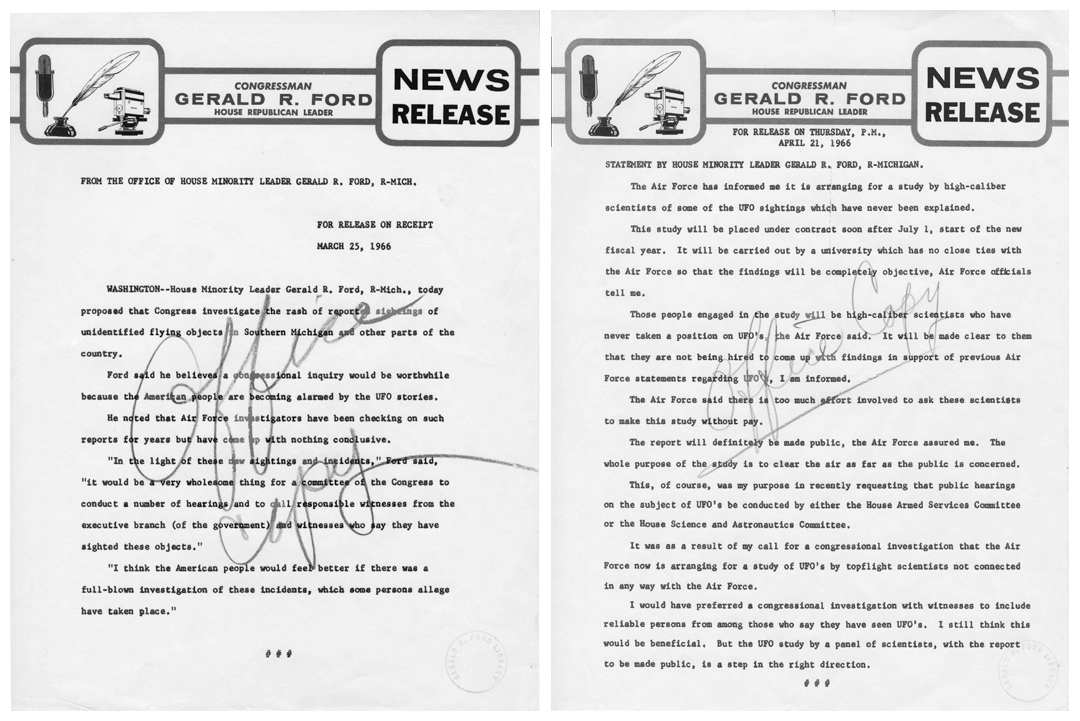 Do Records Show Proof of UFOs?

President Jimmy Carter, saw a UFO over the skies of Leary, Georgia, and filed this report when he was Governor of Georgia. (“Carter, Jimmy,  UFO Report,1973.” Jimmy Carter Presidential Museum and Library, Atlanta, Georgia.)

Over the years, as records have been processed and cataloged at the National Archives, other documents have come to light.

Just a few years ago as archives technician Michael Rhodes was processing hundreds of boxes of Air Force records, he came across a drawing in the corner of a test flight report document that caught his eye.

The drawing—Rhodes said in the July 8, 2013 National Archives Pieces of History blog post, Flying Saucers, Popular Mechanics, and the National Archives—caught his attention because of its striking resemblance to the flying saucers in popular science fiction films made during that era. Researchers can look through the entire series in person or read the Project 1794 Final Development Summary Report of 1956 online.

The National Archives online catalog includes a series of records from the Federal Aviation Administration that document the sighting of a UFO by the crew of Japan Airlines Flight 1628 while in Alaskan air space. National Archives records include simulated radar imagery and an article that appeared in The Philadelphia Inquirer Magazine on May 24, 1987, about the incident.

Records in this collection also include notes from interviews with the three crew members who spotted the UFO and are available in the online catalog.  The records were discovered as part of the Alaskan digitization project, according to Marie Brindo-Vas, a metadata technician at the National Archives in Seattle, Washington.

Another interesting record from National Aeronautics and Space Administration files includes the Air-to-Ground transcripts from Gemini VII. Found in the National Archives online catalog, the records include the transcript of a conversation between Houston control and astronauts who “have a bogey at 10 o’clock high.” Bogey was often the term used to refer to UFOs. The conversation goes on to explain that the astronauts are seeing in a polar orbit “hundreds of little particles going by from the left out about 3 or 4 miles.”

The National Archives also has audiovisual records pertaining to UFOs such as the video of Maj. Gen. John A. Samford's Statement on "Flying Saucers" from the Pentagon, Washington, DC, on July 31, 1952, in which the military leader discusses the Army’s investigation of flying disks. Another video issued by the Department of Defense highlights USAF Lt. Col. Lawrence J. Tacker and Maj. Hector Quintanilla, Jr., discussing Project Blue Book and the identification of UFOs.

The Gerald R. Ford Presidential Library and Museum possesses a document relating to UFOs composed by Ford when he was House Minority Leader and Congressman from Michigan. The original document is located in Box D9, folder “Ford Press Releases - UFO, 1966” of the Ford Congressional Papers: Press Secretary and Speech File at the Ford Library.

In this memorandum, then-Congressman Ford proposed that “Congress investigate the rash of reported sightings of unidentified flying objects in Southern Michigan and other parts of the country.”   An attached news release to that memorandum goes on to say “Ford is not satisfied with the Air Force explanation of the recent sightings in Michigan and describes the "swamp gas" version given by astrophysicist J. Allen Hynek as flippant.”

In October 1969, the then-Governor of Georgia, Jimmy Carter, saw a UFO over the skies of Leary, Georgia. The Jimmy Carter Presidential Museum and Library in Atlanta, Georgia, has the full report that he submitted into the International UFO Bureau.

As more documents are searched, processed, and declassified, what evidence might be found of alien and UFO existence at the National Archives? That remains to be seen, but based on past history, it’s clear that researchers and UFO enthusiasts will continue to dig for more information. The widespread fascination with the possibility of the existence of alien life forms and UFOs continues to arouse great passion and controversy all over Earth.

Aliens in the Archives

What on Earth Is It?