WASHINGTON, July 19, 2019 —  More than a million people visit the National Archives in Washington, DC, each year. Most of them make sure to see the Declaration of Independence, the Constitution, and the Bill of Rights. Those documents are enshrined in the National Archives Rotunda, a chamber designed specifically to hold them and decorated with murals depicting our nation’s Founding Fathers. While millions of people have seen the paintings when visiting the Rotunda, most of them likely don’t know the background behind the artwork.

Gorelic noted that the murals’ story begins in 1933, when John Russell Pope, the architect of the National Archives building, designated that there be two murals in the Rotunda. Artist Barry Faulkner was commissioned to create the paintings, and it took him three years to complete them, before they finally were hung in 1936.

Gorelic said he found his passion for the murals while leading public tours as part of his volunteer duties as a docent.

“I always noticed out of the corner of my eye, this one figure, John Dickinson, holding his hand on his chin,” Gorelic said. “I was always wondering why would anyone put someone in such a pose so centrally in a painting.”

After researching the role of Dickinson in the Declarations, Gorelic concluded that his depiction represented Dickinson's concerns about declaring independence from England. Dickinson served as the Chairman of the Committee to write the Articles of Confederation.

After uncovering one hidden story, Gorelic went on to search for others. Many are included in the backgrounds of the paintings. For example, the sky in the Declaration mural features many dark storm clouds which, together with the battle flags of the Revolutionary War, are symbolic for the dangerous political climate at the time. The Constitution mural features a clear blue sky and the flags of the thirteen colonies arranged in the form of a union, thereby denoting a time of peace and victory after the war with the British.

Another story was hiding in the dark grey cloud over Thomas Jefferson in the Declaration mural that resembles the profile of Abraham Lincoln's face. According to Gorelic, this feature may have been used symbolically to represent the slavery issue incorporated into a late Jefferson draft of the Declaration of Independence, thereby expanding the historical scope of the murals beyond the founding period of the United States and into the Civil War period. 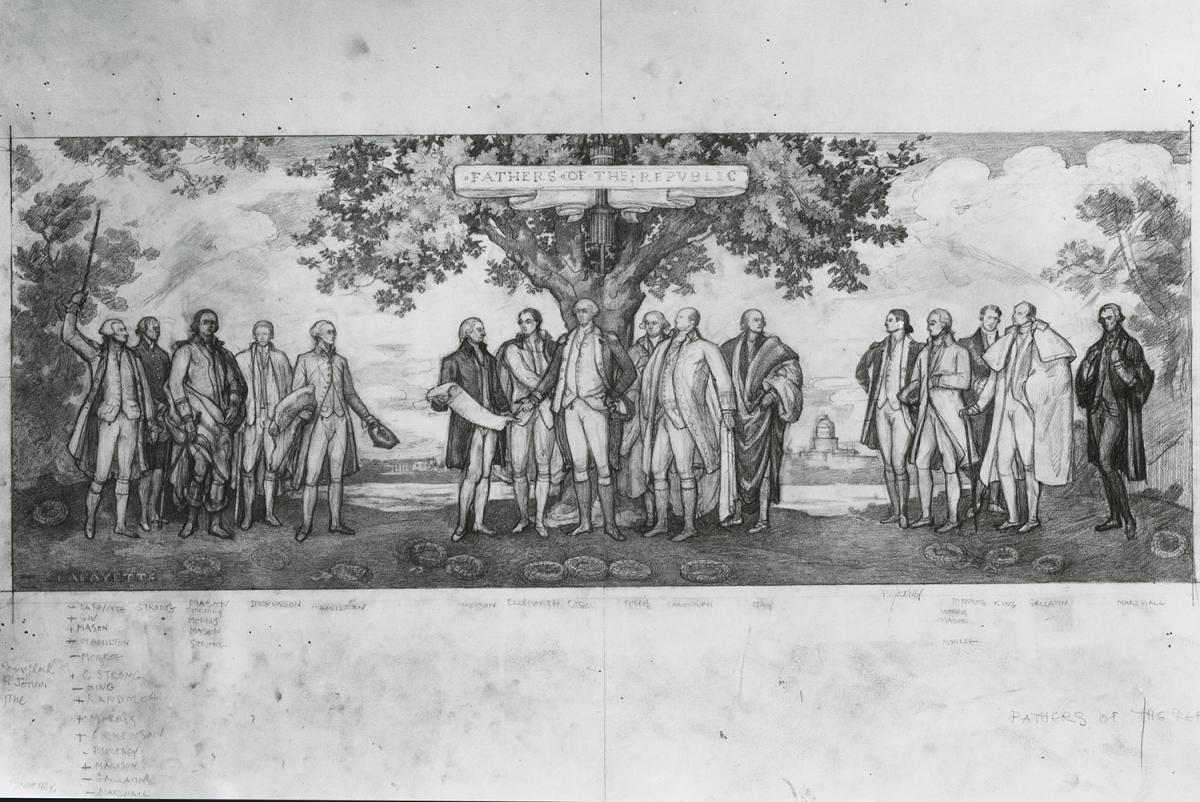 “You might think that you would reach a point where you’ve got enough answers and you back off,” Gorelic said, “but the problem is you start getting more and more involved, and you start realizing the incredible creativity behind this man, Faulkner.”

The history of the Faulkner murals is a staple in Gorelic’s docent tours. “I love talking about it to people,” he said.

Despite his expertise with the Faulkner murals, Gorelic does not have a background in art or history. Before becoming a National Archives volunteer and leading tours, he worked as a scientific researcher and administrator at the National Cancer Institute for nearly two decades. He holds a doctorate in chemistry.

“One of the elements of my background is statistics, and I love working with numbers and data,” he said. “I was trying to figure out what I was going to do when I retire, and they had the 75th anniversary celebration [of the National Archives] and I said, ‘Oh my god, all the information that can be analyzed!’ And that’s why I came here [to the Archives].”

“You see, I’m not a historian, so I’ve never had the experience of discovery of historical facts and documents,” Gorelic said. "I never expected this outcome from my Archives experience."

Goleric said the act of discovery was the most exciting part of the research process. Through the Archives, he's developed a passion for the history behind the murals and a desire to share it with the public. That is what drove him to conduct extensive research.

“These are not just pictures, but they really do tell the stories of our early history,” he went on to mention. “It’s almost became a mission to make the public fully aware of what Faulkner had achieved through art.”

Learn more about "The Story of the Faulkner Murals" on the Pieces of History blog.

The companion mural to "The Declaration of Indpendence" in the Rotunda is "The Constitution." (National Archives)

(Liam Behan is an intern at the National Archives.)