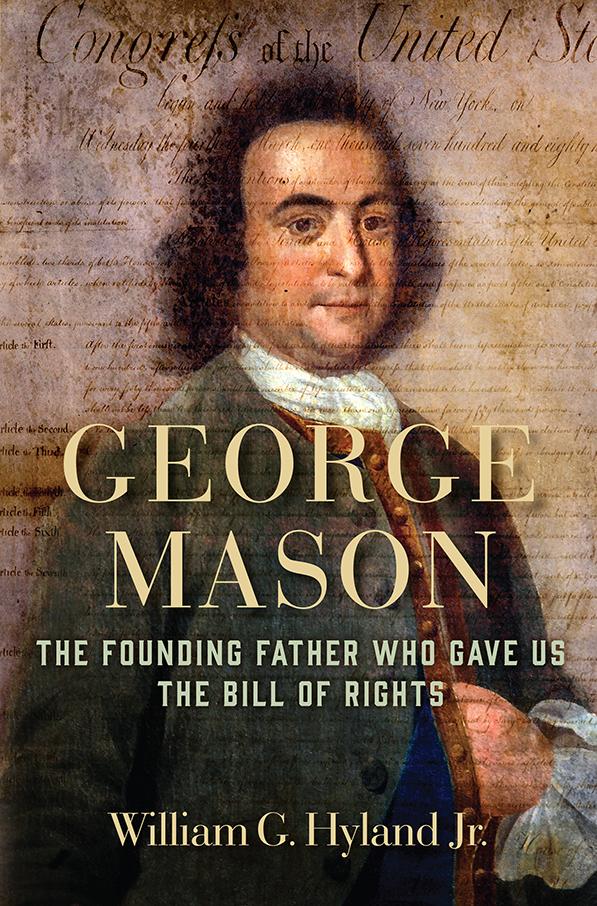 WASHINGTON, August 23, 2019 — Despite his opposition to the newly drafted Constitution in 1787, George Mason was “one of the ablest constitutionalists of all time,” according to the author of a new biography of the Founding Father.

Biographer William G.Hyland, Jr., said at an August 16 program in the William G. McGowan Theater in the National Archives Building in Washington, DC, that Mason’s work provided much inspiration for the Bill of Rights, which is the first 10 amendments to the U.S. Constitution.

Speaking during a daytime public program, Hyland noted that Mason was one of only three members of the 1787 Constitutional Convention to vote against the final draft of the Constitution. While Mason is best known for that negative vote, Hyland said, his principal reason for opposing it was that it lacked a section that spelled out the individual rights for American citizens.

Hyland is author of George Mason: The Founding Father Who Gave Us the Bill of Rights. He is a litigation attorney and author of four other books, three of them about Thomas Jefferson.

In his introduction of Hyland, Archivist of the United States David Ferriero noted that while the Rotunda of the National Archives Building holds the Declaration of Independence and the Constitution, it also has the Bill of Rights, in which Mason played a critical role.

Hyland said Mason played key roles in writing the constitution of Virginia and in formulating the Declaration of Rights for Virginia. Some of the language used in the Constitution is the same or similar to language Mason had used before in Virginia, such as “high crimes and misdemeanors” and “aid and comfort” for enemies.

After the Constitution was adopted, Mason worked with others to fashion a set of individual rights as amendments to the Constitution. They were introduced in the first Congress by then-Representative James Madison and were ratified by the necessary 9 of 13 states in 1791. Hyland said that Mason wrote the first version of what is now the Second Amendment to the Constitution, the right of citizens to bear arms.

Hyland said that because of his negative vote on the Constitution, Mason is not thought of in the same way other more famous Founding Fathers are.

"Full historical noteriety has not been accorded to George Mason," he said, and Mason's contributions have been assigned to the "second tier of historical relevance."

The talk continued NARA’s series of noontime programs, which are free and open to the public in the William G. McGowan Theater of the National Archives Museum in Washington, DC. Attendees are encouraged to use the Special Events entrance on Constitution Avenue at 7th Street, NW. The museum is Metro-accessible on the Yellow and Green lines, from the Archives/Navy Memorial/Penn Quarter station. Reservations are recommended and can be made online. For those without reservations, seating is on a first-come, first-served basis. The Theater doors will open 45 minutes before the start of the program. Late seating will not be permitted 20 minutes after the program begins.

View our calendar to learn of future events across the National Archives.