An audio-visual archivist working at the Herbert Hoover Presidential Library discovered that some of former First Lady Lou Hoover’s home movies may in fact be the earliest color home movies ever taken at the White House.

During recent preservation efforts at the library on seven of Lou Hoover’s home movies, Lynn Smith was the first to realize that the seven reels of film might not be what they appeared. Close inspection revealed that the black-and-white films are actually rare, early Kodacolor films.

“I realized some of Lou’s home movies used Kodacolor film but, because it appears like black-and-white film, previous archivists assumed it must be black-and-white,” Smith explained.

Kodacolor film was first released to the public in August 1928. On the surface, it appears as black-and-white film with lines. But when projected through special filtered lenses, the color embedded in the film is restored.

In 2014, Smith read about the National Archives efforts to preserve early Kodacolor film of Yellowstone National Park, and she began to wonder about some of the films in the Hoover Library.

"Lou Hoover, like her husband, actively followed advances in technology," according to Tom Schwartz, Director of the Herbert Hoover Presidential Library-Museum. "We are grateful to Lynn for recognizing Lou's early use of the new Kodacolor film."

Lou Hoover embraced still photography and began using a home movie camera by the 1920s. She was one of the early adopters of the new Kodacolor film and camera. Like most home movies, the films capture more private and unguarded moments of family life.

Kodacolor was eventually replaced with the more popular Kodachrome film in 1935. Because of the cost of the film, and its brief period of use, color home movies from this period are rare. Rarer still are color movies showing the White House and its grounds and other Washington, DC, attractions. 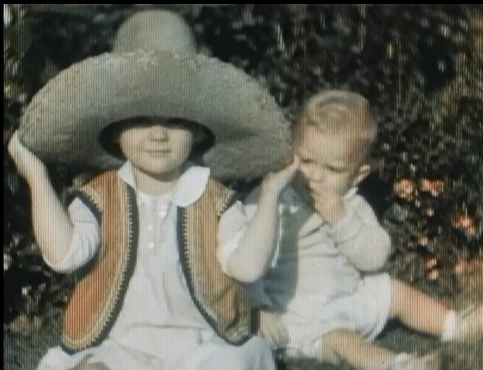 “The first Kodacolor home movies were shown by George Eastman on July 30, 1928, a mere seven months and four days before President Calvin Coolidge left office. The patent for the ‘Optical System for Color Processes’ was issued September 25, 1928, just over five months before Coolidge left,” Smith said. “As a retiring president, it seems unlikely that Mr. or Mrs. Coolidge would have taken home movies at the White House.”

Smith contacted the Library of Congress and the Coolidge Presidential Library-Museum in Northampton, MA. Neither had home movies of the Coolidge family. She is awaiting replies from the National Archives’ Motion Pictures branch and the Northeast Historic Film archives in Maine, but so far it seems that the Hoover films may be the first color home movies of the White House.

"This discovery shows the Hoovers engaged in activities familiar to all families, so we see a bit of ourselves in them,” Schwartz said. “That the movies are some of the first in color and that they reflect the activities of a Presidential family make them unique."

Lou Hoover modified the second-floor West Hall into a room where she could show her home movies to family and friends. The reels provide glimpses into the Florida fishing trip taken by Herbert and Lou Hoover in late January 1929, when he was President-elect. This would be the last vacation before assuming the Presidency on March 4, 1929, and before the burdens of his office began to wear on the First Family.

Other reels capture playful scenes of grandchildren and vacation trips of taken by the Hoovers’ sons, and touristy images of Washington, DC, historic sites. Scenes of the White House gardens reflect Mrs. Hoover’s concept for the exterior appearance of the garden plots. The final reel of film shows the first color images of President Hoover in his morning routine of tossing a medicine ball with others. This activity would eventually become the game known as Hooverball.

Thanks to a grant from the National Film Preservation Foundation, which covered the costs of preserving the film and creating digital files, these restored color home movies will be available for public viewing on March 29, 2017, the 143rd anniversary of Lou Henry Hoover’s birth, at www.hoover.archives.gov.