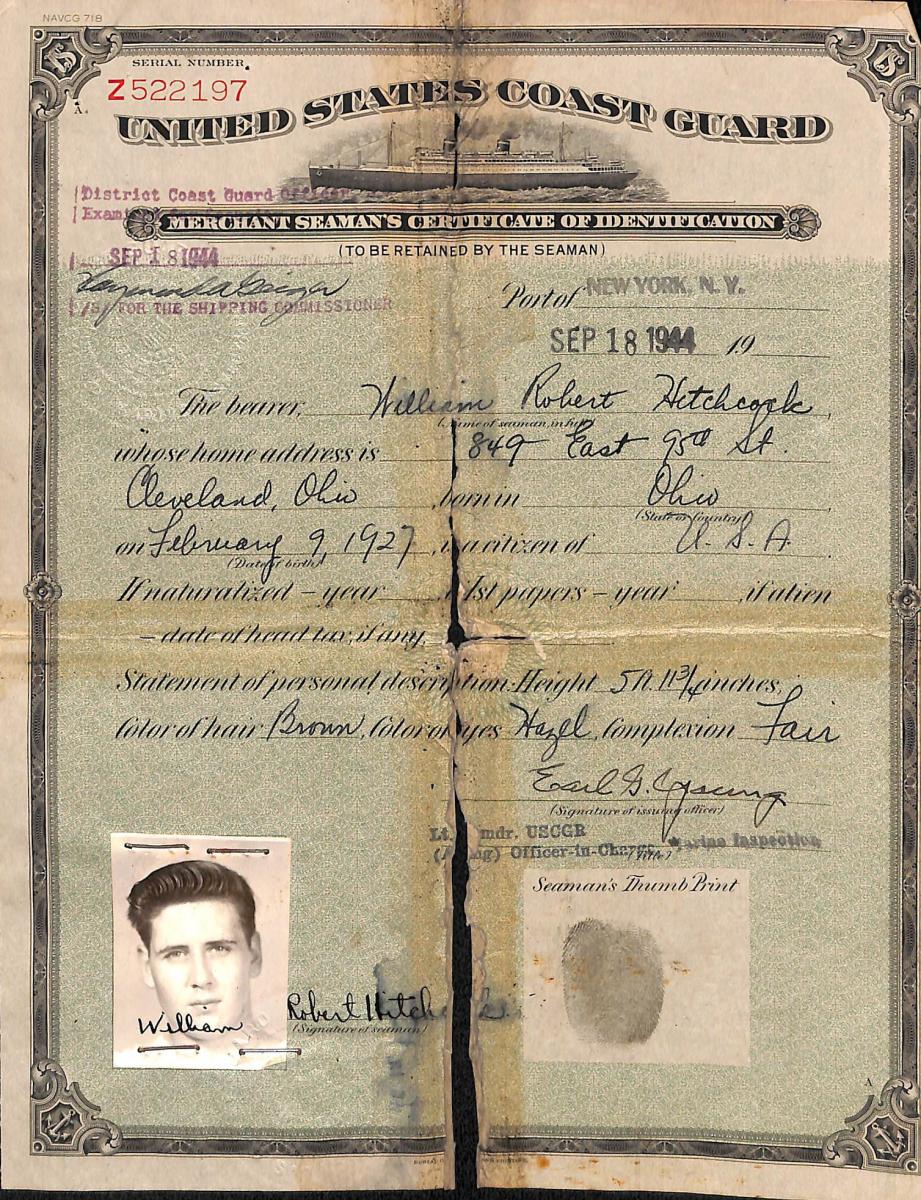 One of the documents found in a record for a 17-year-old merchant seaman named William Hitchcock. (Records of the U.S. Coast Guard, Record Group 26)

The public can access these records in two ways: through a request made via an offsite reference request (with reproduction provided for a fee), or via onsite viewing at the National Archives at St. Louis Research Room. The collection opened to the public on December 2, 2019.

"Service in the Merchant Marine was considered civilian service under several different civilian personnel agencies. However, service was considered military in nature for those who served between December 7, 1941, and December 31, 1946. Due to the multifaceted nature of the Merchant Marine, we are very grateful to obtain this collection in order to provide clarity to their service," said Theresa Fitzgerald, Chief of Archival Operations in St. Louis.

Merchant mariners or merchant seamen are assigned to vessels that primarily transport cargo and passengers during peacetime. During wartime, however, they can become an auxiliary to the United States Navy—called upon to deliver military personnel and materiel for the military.

“Along with this new series have come some new experiences. These files have joined our collection in an effort to better serve the public who are looking for proof of their ancestor's service–civilian or military,”  Fitzgerald said.

She explained that the files provide a unique glimpse into our nation’s maritime history and offer a visual record of the toll that wartime service took on these merchant mariners.

“Though looking into the past, it is usually rare that we can also look into the faces from the past. That is not the case with the Merchant Marine Licensing Files,” Fitzgerald said. “These records not only tell the complicated stories of merchant mariners, some of whom served in peacetime and were transitioned to very different wartime service, but they also, almost consistently, show the faces of the young men and women in service. It is not uncommon to find multiple pictures in these files. Here at the National Archives at St. Louis, we are honored to observe the change in a face over time-in-service via these photographs. It is humbling to see how service affected these individuals.”

The first block of this series contained 4,800 cubic feet of records. The series includes personnel records with papers documenting the service of merchant seamen licensed by the United States in the years up to and including 1967.

These pre-1967 records, from Record Group 26, Records of the U.S. Coast Guard, Merchant Marine Personnel and Licensing Records, contain a wealth of information. Most notably they contain rich genealogical history, photographs, and artifacts such as ID cards or log books that relay information from their journey over the seas.

Each file provides the name and address of the seaman, place and date of birth, and license numbers. It also notes the name of vessels served on and the seaman’s status. The personnel record can contain an identification number (“Z” number), relevant contract renewal and discharge information, and the date and place of issue of other certifications, applications, licenses, and correspondence. The record may also contain photographs, birth certificates, and documents related to union membership.

Another two blocks in this collection, approximately 3,283 feet of records, will be accessioned at the National Archives at St. Louis in the coming months.

The Coast Guard National Maritime Center (NMC)  is the approving official for World War II Merchant Marine separation documents. The National Archives at St. Louis does not provide information for benefits or separation documents, such as DD-214s, for these records. To determine eligibility for a Certificate of Release or Discharge from Active Duty, DD Form 214, or a Report of Casualty, DD Form 1300, customers will be directed to to NMC’s website. St. Louis staff will also refer requests to the NMC on a customer's behalf. 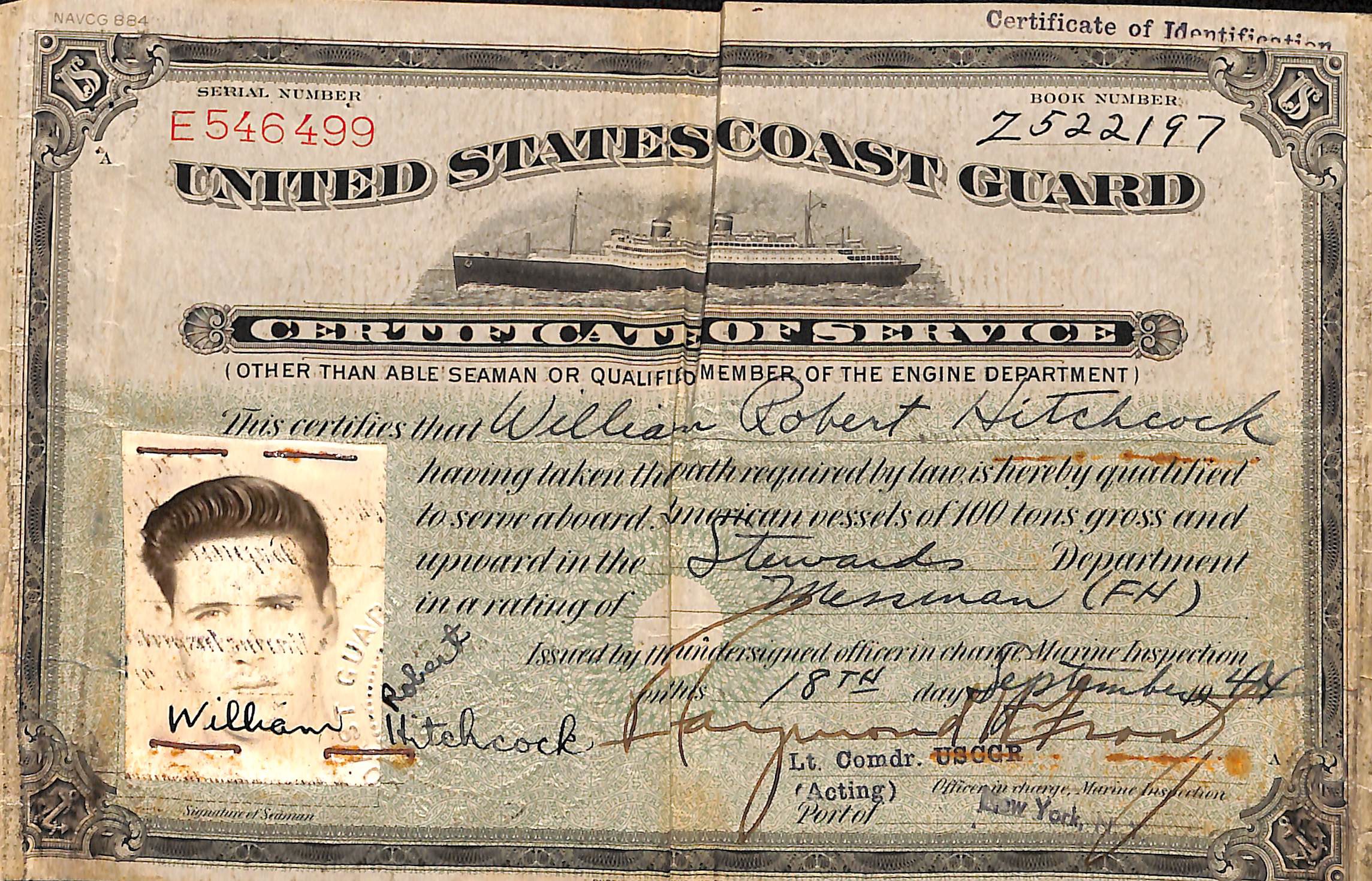 Certificate of service from the personnel file of William Robert Hitchcock. (Records of the U.S. Coast Guard, Record Group 26)