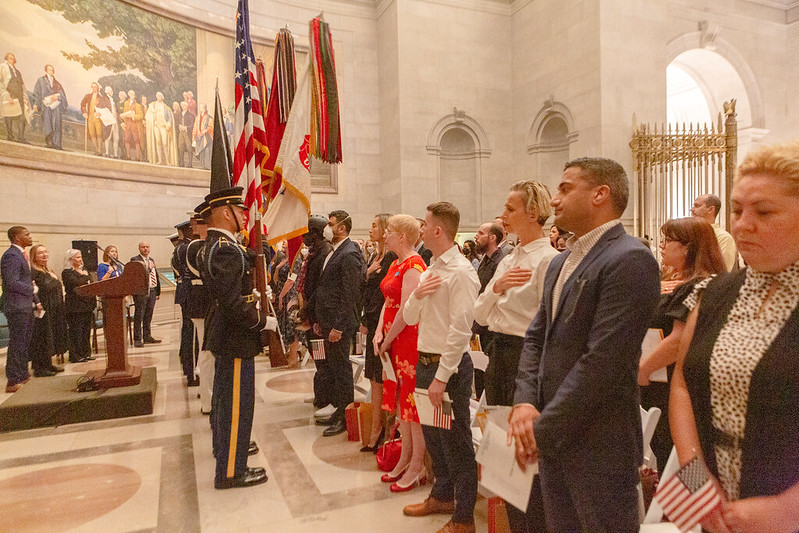 The Joint Service Color Guard opened the first naturalization ceremony at the National Archives and Records Administration (NARA) since the onset of the COVID-19 pandemic. Washington, DC, September 14, 2022. NARA photo by Susana Raab.

WASHINGTON, September 16, 2022 — Twenty-five people became U.S. citizens in a naturalization ceremony at the National Archives and Records Administration this week.

Before a small group of family, friends, and government officials, immigrants from 21 countries swore their allegiance to the United States steps away from the Constitution on September 14, the first such ceremony celebrated at the National Archives in three years due to the COVID-19 pandemic.

The Honorable Beryl A. Howell, Chief Judge for the U.S. District Court for the District of Columbia, presided over the event.

“America is a richer place because of your stories and the cultural experiences that you bring here with you, because America's strength is in the diversity of our people,” Howell told the new citizens.

The ceremony—a regular event at the National Archives before the pandemic—is held in observance of Constitution Week, which marks the signing on September 17, 1787, of the United States Constitution. 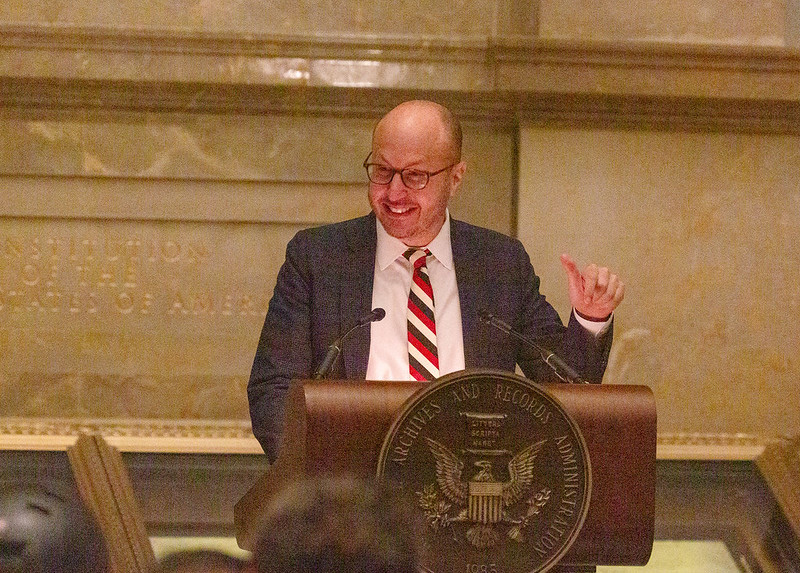 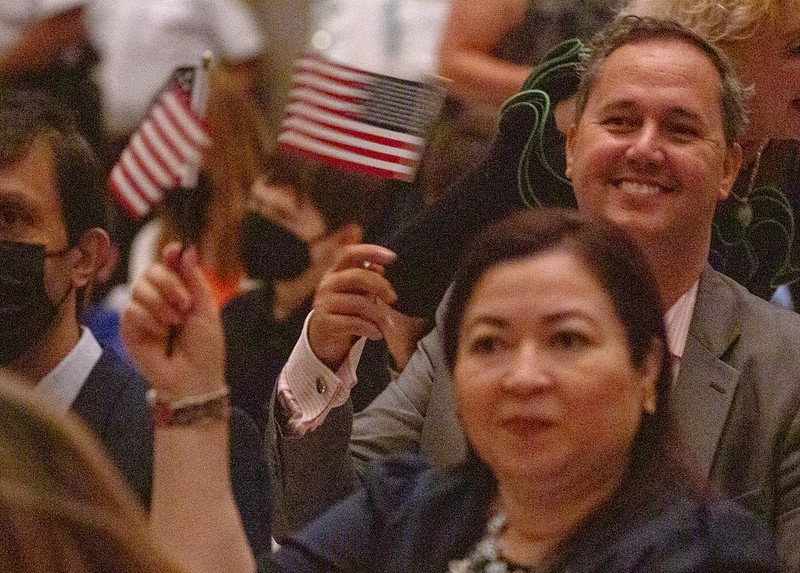 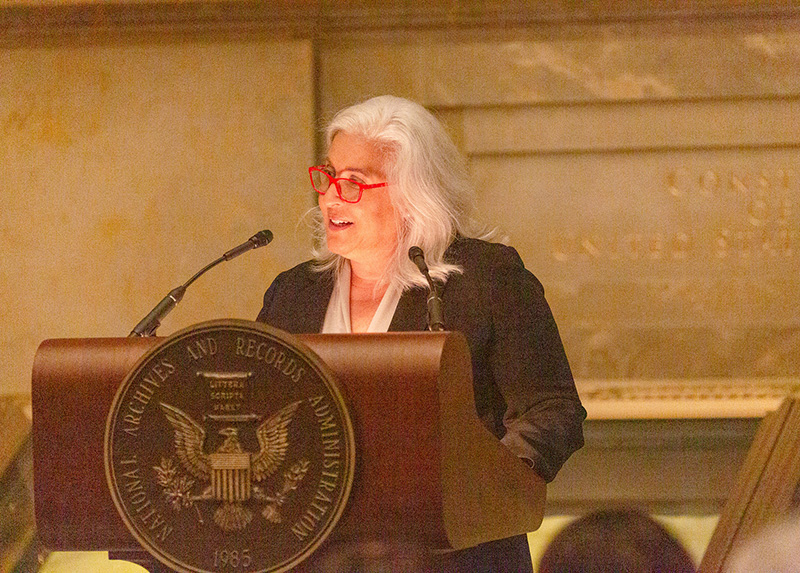 Being in the presence of that document makes the event especially poignant, said Debra Steidel Wall, Acting Archivist of the United States.

“These are your rights now,” she told the new citizens.

“We have billions of pages of records here at the National Archives,” Wall said. “Becoming an American citizen means that you will now be part of the National Archives because your naturalization documents will eventually be a part of our holdings. So maybe someday your descendants will look at those documents to learn more about your story.”

In the audience for the ceremony were also students from Washington, DC’s Alice Deal Middle School, who recited the Preamble to the Constitution for the crowd of about 100 people.

Marsha Espinosa, Assistant Secretary for Public Affairs at the Department of Homeland Security, the agency that oversees U.S. Citizenship and Immigration Services, told the new citizens that their life stories “bound us together with the tales of our nation's founders, told in the pages here...”

“We're surrounded by that story here today of the men and women who put their names and lives on the line for an idea inked onto the parchment of the Declaration of Independence and the Constitution,” Espinosa said. 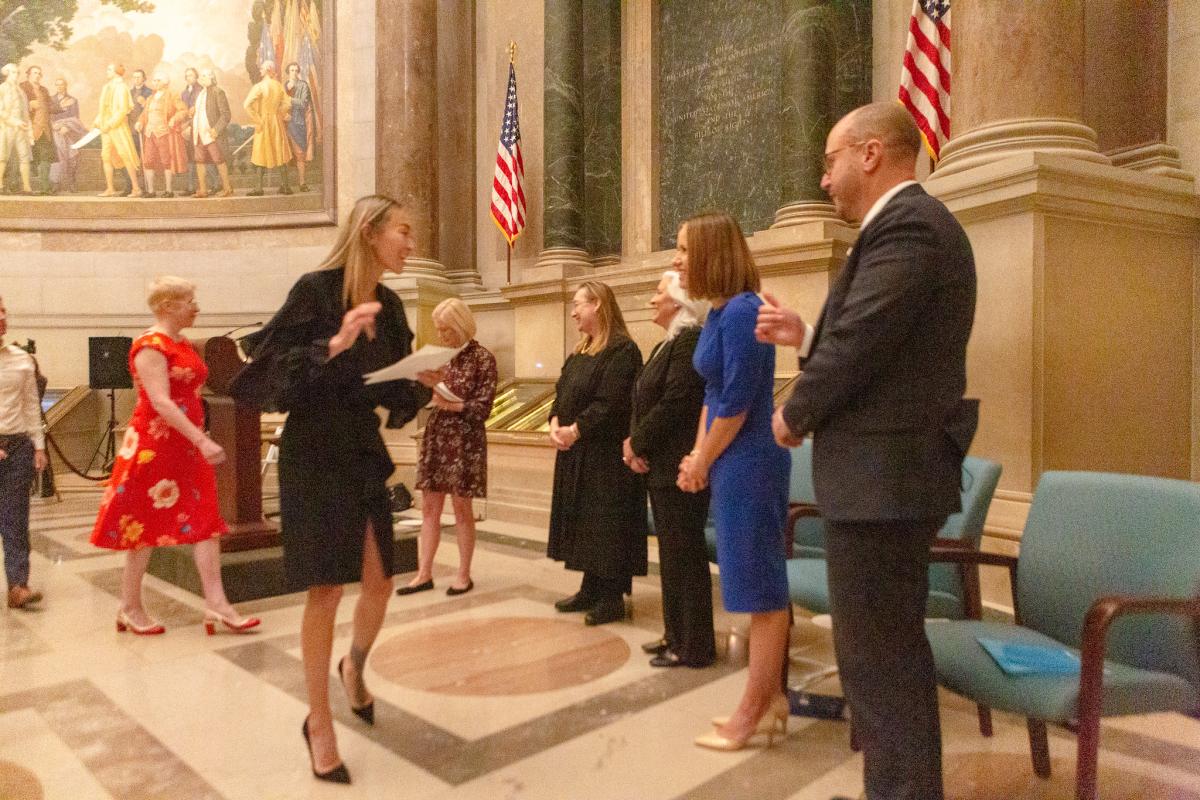 Keynote speaker Roger Bennett, right, and Marsha Espinosa, Assistant Secretary for Public Affairs at the Department of Homeland Security, second from right, congratulate Jessica Chu, who was born in Mongolia and obtained a masters degree in Slovakia before emigrating to the United States and obtaining U.S. citizenship. Washington, DC, September 14, 2022. NARA photo by Susana Raab.

Keynote speaker Roger Bennett, the England-born author and broadcaster who became a naturalized U.S. citizen in 2018, echoed the same spirit of inclusivity and participation in his keynote address.

“That document behind me, the Constitution—our Constitution—it begins with the iconic phrase, ‘We, the People.’ You are now part of that ‘we’,” Bennett said. “I can tell you from experience, this moment of becoming a citizen is a profound personal transformation, one that turns your American dreams formally into an American reality.”

Bennett, who teared up throughout his keynote address as he shared stories about his own path to citizenship, invoked the legacies of the country’s activists, writers, and trailblazers like Martin Luther King, Susan B. Anthony, Ida B. Wells, Harvey Milk, Cesar Chavez, and Grace Lee Boggs as proof of “American lives, lived with courage, optimism, and hope, daring this country to live up to its potential.”

“This constitution that we revere and celebrate this week is itself proof of the possibility to thrive through change. Indeed, the genius of America is that we can change.... And this is what makes America extraordinary,” Bennett said. “And now all of you are part of this work. Let us lift that mantle up together, understanding our capacity. Our responsibility as citizens is to dedicate ourselves to change for the betterment of all.”