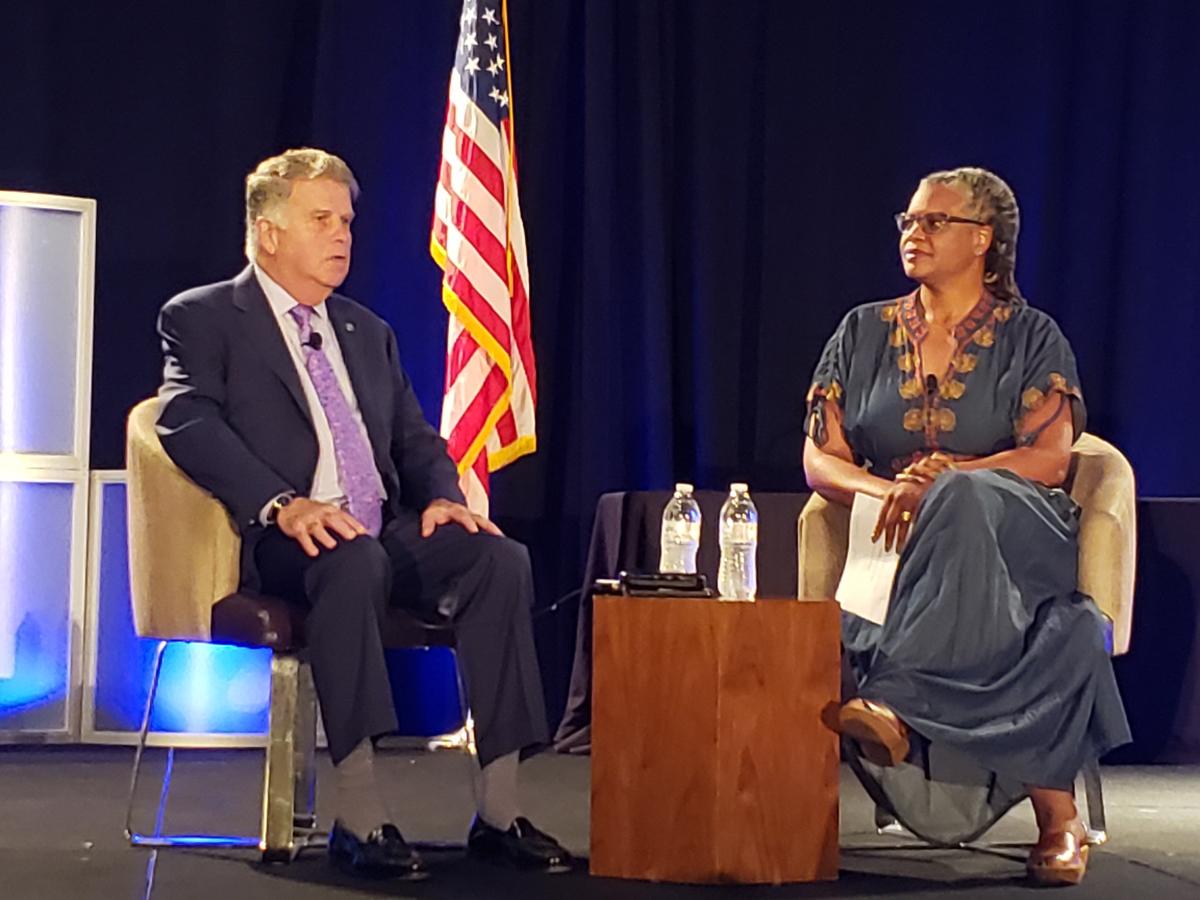 Archivist of the United States David Ferriero and Meredith Evans, SAA President and Director of the Jimmy Carter Presidential Library, have a public conversation about the archival profession during Archives*Records 2019. (National Archives Photo by Meg Phillips)

WASHINGTON, August 19, 2019 — “Archivists change the world” is a pretty bold statement, but when it is said by Archivist of the United States David S. Ferriero after concluding his plenary session at Archives*Records 2019, it becomes a beacon to all who work in this profession.

Ferriero and several other employees of the National Archives and Records Administration (NARA) spoke at the joint annual meeting of the Society of American Archivists (SAA) and the Council of State Archivists (CoSA), in Austin, TX, to share their insights in the archiving field. The theme of this year's conference, which ran from July 31 to August 6, was “Transformative.”

“We want to be An Open NARA, Out in Front, and Archives*Records 2019 is an important opportunity for us to demonstrate these qualities in the broader archives profession,” said Meg Phillips, External Affairs Liaison with the National Archives.

To demonstrate some of that openness, Ferriero and Meredith Evans, SAA President and Director of the Jimmy Carter Presidential Library, took the stage at the second SAA*CoSA Plenary for a public conversation about the archival profession and its changes, especially the transition to digital archives. Ferriero discussed NARA’s work on the Electronic Records Archives (ERA) system, a key component of the government’s digital transition.

“Creating an opportunity for all agencies and the White House to deliver records to us electronically at the appropriate time is the focus of ERA 2.0,” Ferriero said.

Since 2008, NARA has been using ERA to take in and preserve electronic records from the White House, Congress, and agencies across the Federal government, and it now stores  more than 500 terabytes of electronic records. In addition, since 2012, NARA has required all Federal agencies to use ERA to submit records schedules electronically to NARA for approval by the Archivist.

“We are going to use the resources from the Obama Foundation that would have been devoted to creating a physical facility to digitize the rest of them so that we have a digital Presidential Library,” Ferriero said. “I hope that it is so successful that then we can focus on supporting the digitization efforts in other Presidential Libraries.”

In addition to Ferriero and Evans’s conversation, NARA staff spoke on a variety of topics such as audiovisual archives, transforming declassification, transparency in records management, oral history collections, donations from one archives to another, and more.

All the presentations on topics in archives and recordkeeping offered attendees information to improve their skills as well as to transform their way of thinking.

"Many archivists around the country look to NARA for leadership in the profession, so it's important for us to share what we do and also to see what we can learn from others,” Phillips said.