WASHINGTON, June 18, 2019 — Women have come far in American politics but still have a long way to go to achieve parity with men, according to a group of former members of Congress and a top White House official. 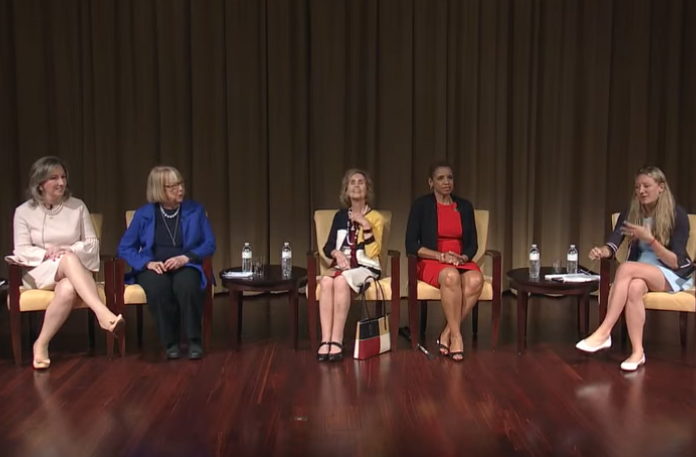 “Being taken seriously is a problem women have always had,” said former Rep. Connie Morella, a Maryland Republican. “Less so now than before.”

All the former officials, however, said they were encouraged by the fact that more and more young women are getting into politics and running for office.

Morella and others made their remarks during a program, “The Female Candidate for Office: Challenges and Hurdles,” held in the William G. McGowan Theater at the National Archives in Washington, DC, on June 13.

The program is one of many relating to the National Archives’ new exhibit Rightfully Hers: American Women and the Vote, which is the cornerstone of the agency’s centennial celebration of the 19th Amendment. Deputy Archivist Debra Steidel Wall remarked in her introduction of the panel, “The decades-long fight for the vote prepared women for the next logical step—election to office themselves.”

A record number of women now serve as Representatives and Senators in Congress but still make up only 28 percent of the entire Congress, compared to 50 percent of the U.S. population.

Former Rep. Donna Edwards, a Maryland Democrat, said women must still combat long-held stereotypes of what a woman in politics must be and how she handles both political work and home life.

“There’s still a lot of training that needs to be done both in the media and in the public,” she said.

But all the participants indicated they were encouraged that more young women are getting into politics.

“On the Democratic side, some of the best and most effective organizations I know are those working to get young women running,” said Ann Lewis, former White House Director of Communications.

Former Rep. Barbara Comstock, a Virginia Republican, also said women must decide on their own, not wait for approval from others. “Running for Congress is very personal,” she said, “and I didn’t wait for some guy to say ‘do it.’”

The discussion was moderated by Washington Post columnist Alexandra Petri.

The program was presented in partnership with the U.S. Association of Former Members of Congress, the 2020 Women’s Vote Centennial Initiative, and the National Women’s History Alliance.