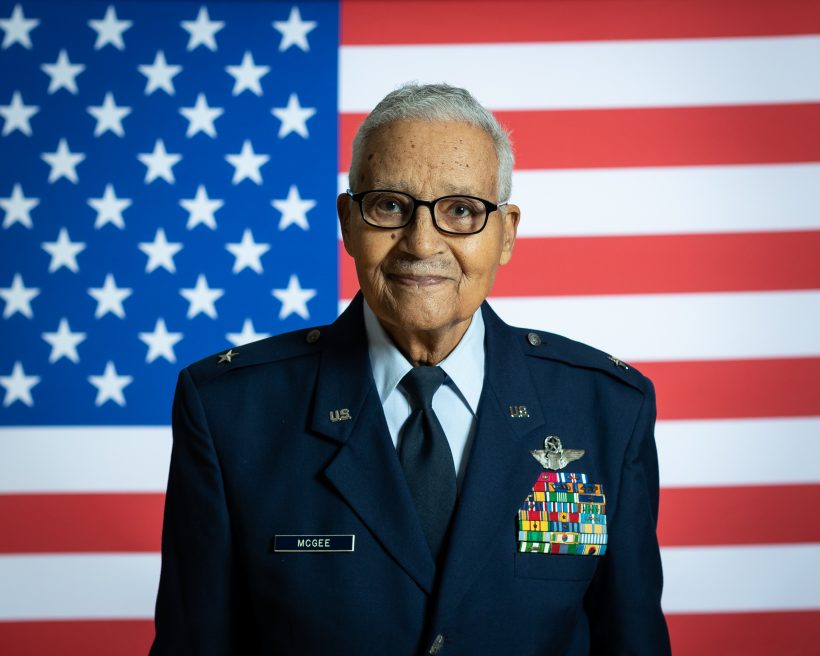 By maintaining and providing the storied pilot’s military records to officials in Washington, the National Archives swiftly acted to ensure McGee would receive the documents that traced his trajectory as one of the last living members of the Tuskegee Airmen.

The presentation of these documents was one part of a very busy week for Charles McGee, who arrived in the nation’s capital as a colonel, and left as a brigadier general.

First, though, he started the week by walking the ceremonial coin to National Football League referee Bill Vinovich for the official coin toss. McGee was one of four centenarian veterans chosen to participate, along with Staff Sergeant Odón Sanchez Cardenas, Lieutenant Colonel Samuel Lombardo, and Corporal Sidney Walton.

As Director of the National Personnel Records Center (NPRC) Scott Levins settled in to watch the Super Bowl game on February 2, a familiar face appeared on screen. A week earlier, the White House requested McGee’s military paperwork from a career that included 409 combat missions—more than any other black serviceman—so they could be presented to him at a ceremony in Washington. 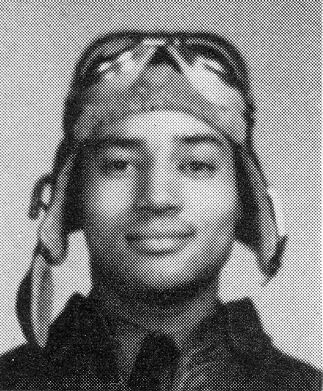 Charles McGee, detail of class picture of aviation cadets of 1943. The entire class picture is available through the download button.(National Personnel Records Center) 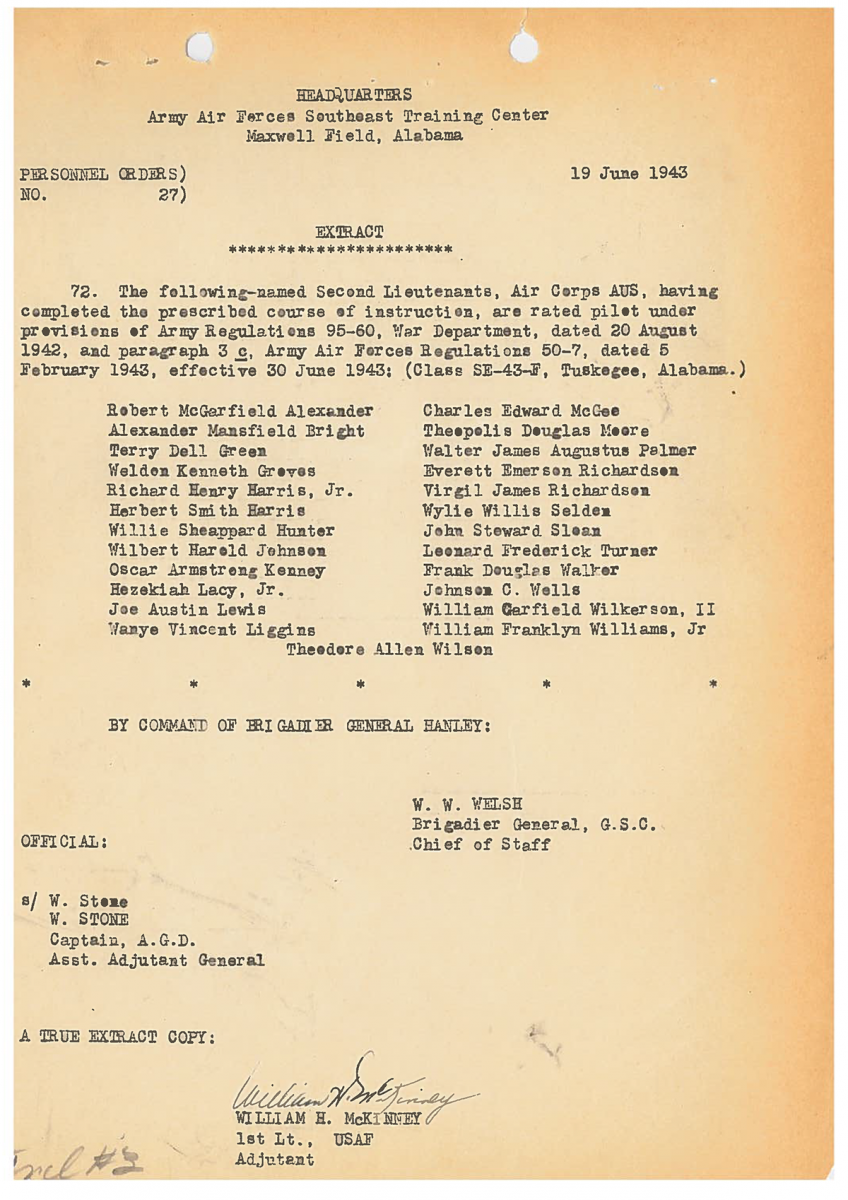 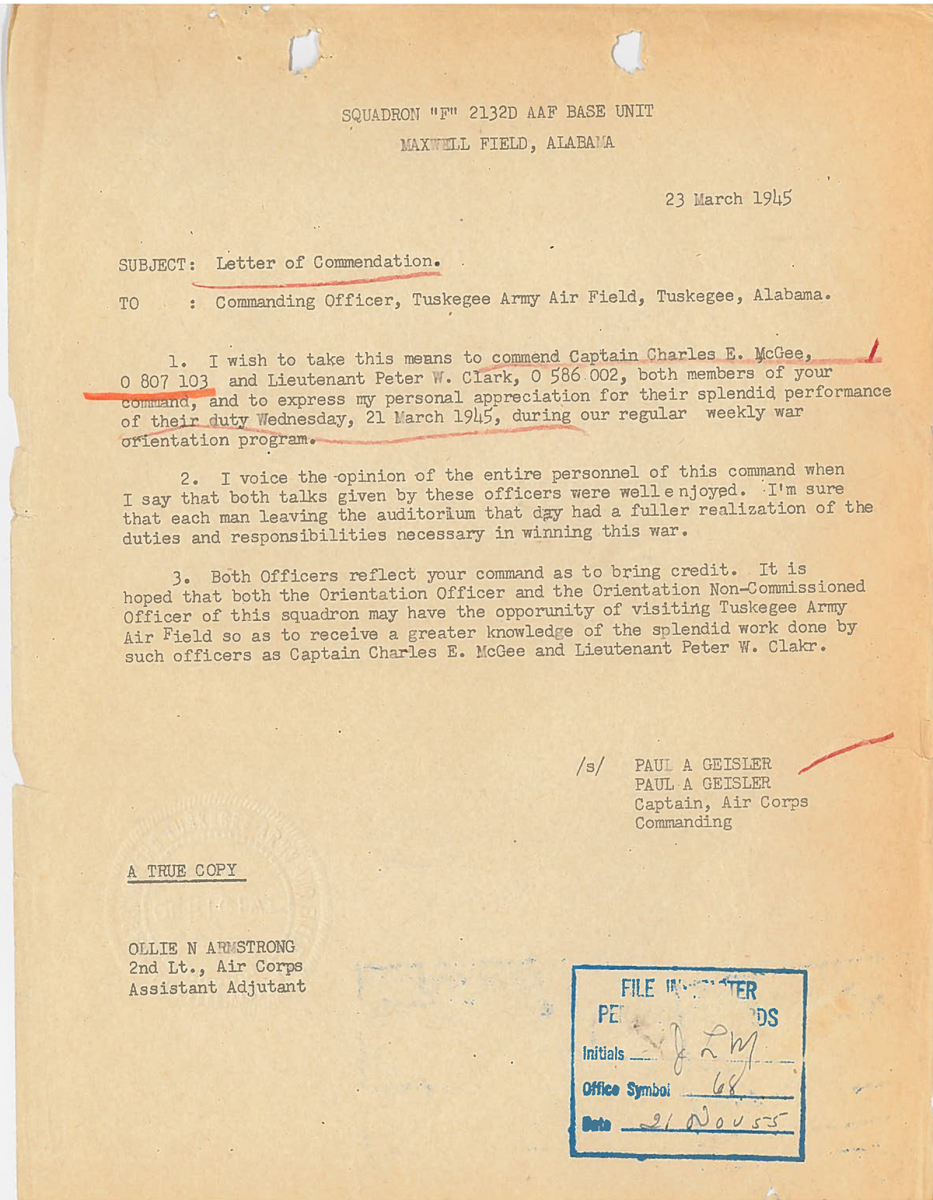 “I had no idea the request was related to his appearance at the Super Bowl,” Levins recalled.

Two days later at the White House, McGee received the honorary promotion.In a U.S. Air Force press release, he said that, “[L]ooking back, it would have been nice to have had that during active duty, but it didn’t happen that way. But still, the recognition of what was accomplished, certainly, I am pleased and proud to receive that recognition and hopefully it will help me carry on as we try to motivate our youth in aviation and space career opportunities.”

That evening, McGee and his 13-year-old great-grandson Lain Lanphier were President Donald Trump’s guests at the State of the Union. Trump praised the career officer during his address. “After more than 130 combat missions in World War II, he came back home to a country still struggling for civil rights, and went on to serve America in Korea and Vietnam. . . . General McGee, our nation salutes you,” he said.

Finally, on February 5, McGee spoke at NASA headquarters in Washington, DC, about his experiences in aviation, and about being among the first black pilots to serve in U.S. military combat. Astronaut Alvin Drew spoke alongside him, and thanked him for making opportunities for him as an aviator of color.

McGee received his military orders the day after his wedding in October 1942, with World War II interrupting his plan to attend the University of Illinois. He was sworn in as a U.S. Army Aviation Cadet. After earning his pilot’s wings, McGee became part of the Tuskegee Airmen, the first black men in the U.S. Army Air Forces (later the U.S. Air Force) who trained at Tuskegee Army Air Field in Alabama during World War II. As the war progressed, he participated in low-level attacks over enemy airfields, and also escorted bombers. By the time he was promoted to captain, McGee had flown 137 combat missions. He came back to the United States to work at Tuskegee and Lockbourne Army airfields, and served in the Korean War and the Vietnam conflict. He served until his retirement in January 1973 and completed his college degree in business administration at age 58.

McGee was National President of the Association of Tuskegee Airmen from 1983 to 1985, and again from 1998 to 2002, with a focus on education, aviation, and space careers for minorities. For decades, he held civilian aviation positions, including director of what is now called the Charles B. Wheeler Downtown Airport in Kansas City, MO. In 2012, he served as a consultant to the film Red Tails, which is based on the stories of the Tuskegee servicemen in World War II.

McGee received numerous accolades and honors in the years since his military retirement, including the Congressional Gold Medal—the nation’s highest civilian award.

In a 1999 interview for Aviation History magazine, Charles McGee said, “My approach to life was, and still is, ‘Do while you can.’”

Just over 20 years after that statement, he continues to be recognized for his full life of service to fellow African Americans, veterans, the field of aviation, and his country.

Copies of the documents included in this story were among those delivered personally to Brig. Gen. McGee by First Lady Melania Trump in February 2020.