WASHINGTON, November 4, 2019 — The massacre of 918 women, men, and children in and near Reverend Jim Jones’s Peoples Temple compound in Jonestown, Guyana, on November 18, 1978, was the largest single loss of American civilian lives as the result of a deliberate act in history until the September 11, 2001, terrorist attacks. 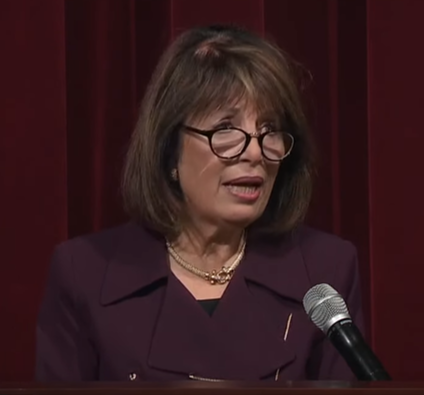 In the days preceding the massacre, Congressman Leo J. Ryan, who represented California’s 11th congressional district—which included San Francisco, home to the Peoples Temple before the congregation fled to Guyana to build Jones’s compound—led a fact-finding delegation into Jonestown to investigate alleged abuses within the commune. Ryan convinced Jones to permit several defectors to leave the compound with his delegation, but as the group prepared to board two small airplanes at an airstrip in nearby Port Kaituma, Jones’s gunmen ambushed the group, killing Ryan and several others.

Among the survivors was Ryan’s wounded aide Jackie Speier. The 28-year-old survived five gunshot wounds at close range during the ambush and feigned death to fool the gunmen as they passed over her body. Speier—who would later become a Congresswoman herself, representing the 14th District in California—recounted her survival of Jonestown and her persistence through the many ups-and-downs that followed in her memoir, Undaunted: Surviving Jonestown, Summoning Courage, and Fighting Back. Speier highlighted her book on Tuesday, October 29, in the William G. McGowan Theater at the National Archives in Washington, DC.

“November 1978 was a harrowing month for residents of the San Francisco Bay Area,” said Archivist of the United States David Ferriero. “Speier’s survival of the massacre at Jonestown, she wrote, guided her ‘into the life [she] was meant to live.’ For the past 40 years, she has pursued a life of public service and now serves in the United States Congress.”

“In these months leading up to the centennial of the ratification of the 19th Amendment,” said Ferriero, “we remember the women who stood up for their rights and beliefs in order to secure women’s right to vote. We also honor the women of the present day who continue to speak up for rights and serve the greater public.”

The National Archives presented the book talk in conjunction with the Rightfully Hers: American Women and the Vote exhibit in the Lawrence F. O'Brien Gallery. Rightfully Hers commemorates the centennial of the 19th Amendment and is open through January 3, 2021.

“I was dying,” said Speier as she read the opening passage of her memoir. “It was just a matter of time. Lying behind a wheel of the airplane, bleeding out of the right side of my devastated body, I waited for the rapid shooting to stop. Then I said my act of contrition, praying by rote for forgiveness. I used what little energy I had left to finish that prayer before the lights went out. But the lights didn’t go out, and I slowly began to take stock of my situation.”

Speier survived the Jonestown massacre to the disbelief of the medical team that treated her. That formative moment in her life steeled her resolve to pursue a career in public service. Yet, more profound darkness awaited her.

“Life is not always fair,” said Speier. “Life is just whatever you get, and while Guyana delivered incomparable trauma, it was not the worst day of my life.”

On January 25, 1994, as Speier traveled to Sacramento, California to deliver a speech to the California Bankers Association, she received an urgent message. She soon learned that her husband, Dr. Steven Sierra, chief of emergency services at San Mateo General Hospital, was braindead from trauma sustained in a car accident caused by a negligent driver.

“He was in the ICU [intensive care unit],” said Speier. “They had done everything they could.”

Speier, pregnant with their second child, brought in the couple’s five-year-old son to the hospital to say a final goodbye. After, she nodded to the doctor attending her husband’s body to terminate life support.

After sharing these harrowing moments, Speier answered questions from the audience.