WASHINGTON, March 18, 2019 — More than a quarter of a million visitors toured the “Remembering Vietnam“ exhibit at the National Archives Museum in Washington, DC, during its recent 15-month run. One visitor, Caitlin Merrell from Denver, Colorado, made the last-minute, cross-country trek to see it during its final few hours. 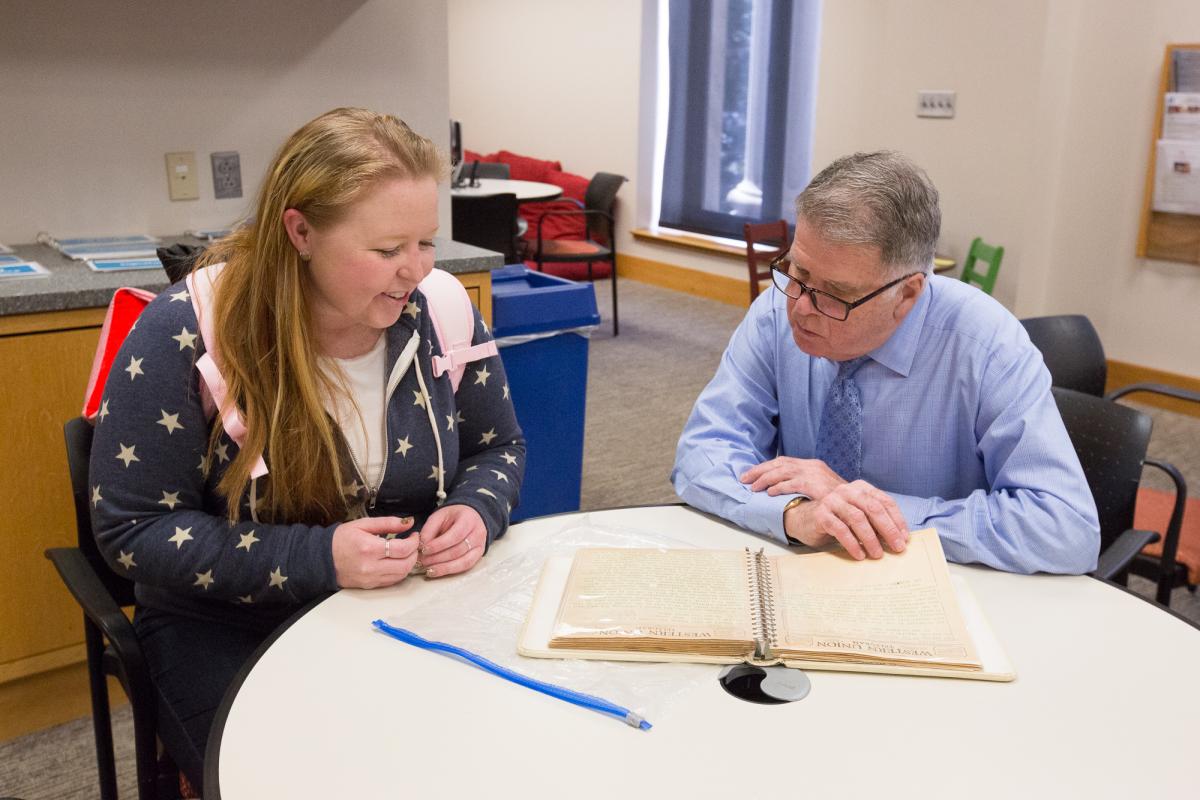 Caitlin Merrell from Denver, Colorado, shares her family's memory album with Archivist of the United States David S. Ferriero during her recent visit to see her uncle's artifacts included in the National Archives' "Remembering Vietnam" exhibit in the Washington, DC. (National Archives photo by Jeffrey Reed)

What led her on this odyssey was a series of serendipitous events, connections, and the recent discovery of the existence of a couple of artifacts included in the exhibit that she learned about less than 24 hours before making the trip. Those artifacts Merrell had to see were related to a loved one lost in the Vietnam War and his mother’s love for and loss of her son more than 50 years ago.

Merrell’s story began as she was doing online research about her grandparents. As she was searching, the Google employee came across what she described as an “intriguing link” related to her uncle—Thomas Lynn Griffee, SP4, United States Army, from Rifle, Colorado—who perished in the Vietnam War at just 19 years of age in October, 1967.

Merrell said she “followed the link out of curiosity,” which took her to the Virtual Wall of Faces, a website sponsored by the Vietnam Veterans Memorial Fund, where family and friends of veterans share memories, post pictures, and connect with each other in an effort to honor all who answered the call to serve during one of the most divisive wars in U.S. history.

It was there that Merrell discovered a post on her uncle’s wall referencing an exhibit at the National Archives Museum. It read:

I went to the National Archives in Washington DC today Thomas, and on display was a letter your mother had written to you and was postmarked October 24th, 1967, two days after your death. It was heartbreaking knowing that as she wrote the letter, she had not yet learned the war had already taken you. It was a lovely short letter in your mother's beautiful handwriting that conveyed her tormented words of hope as she talked about how your family and your community longed for your safe return. On the envelope was stamped, "Confirmed deceased. Return to sender." I think now that the moment I saw that letter will stay with me forever, as will my thoughts for your heartbroken family. Rest in Peace, Thomas, and thank you to your mother (and the National Archives) for the opportunity for me to remember you.”

Merrell said she was “truly touched by the message,” so she immediately reached out to several co-workers in Washington, DC, to see if they knew anything about the exhibit and the letter from her grandmother—Kathyrn Griffee—that was said to be part of it. Through a series of connections, one coworker just happened to know a National Archives employee and gave him a call. The National Archives employee then took a quick look at the exhibit and confirmed that the letter was indeed from Kathyrn Griffee—Merrell’s grandmother—and informed her that it also included a photograph of the woman and her son.

Merrell said it was at that point that she “just knew [she] had to see it in person.” The only problem was that the exhibit was slated to close the very next day more than halfway across the country. 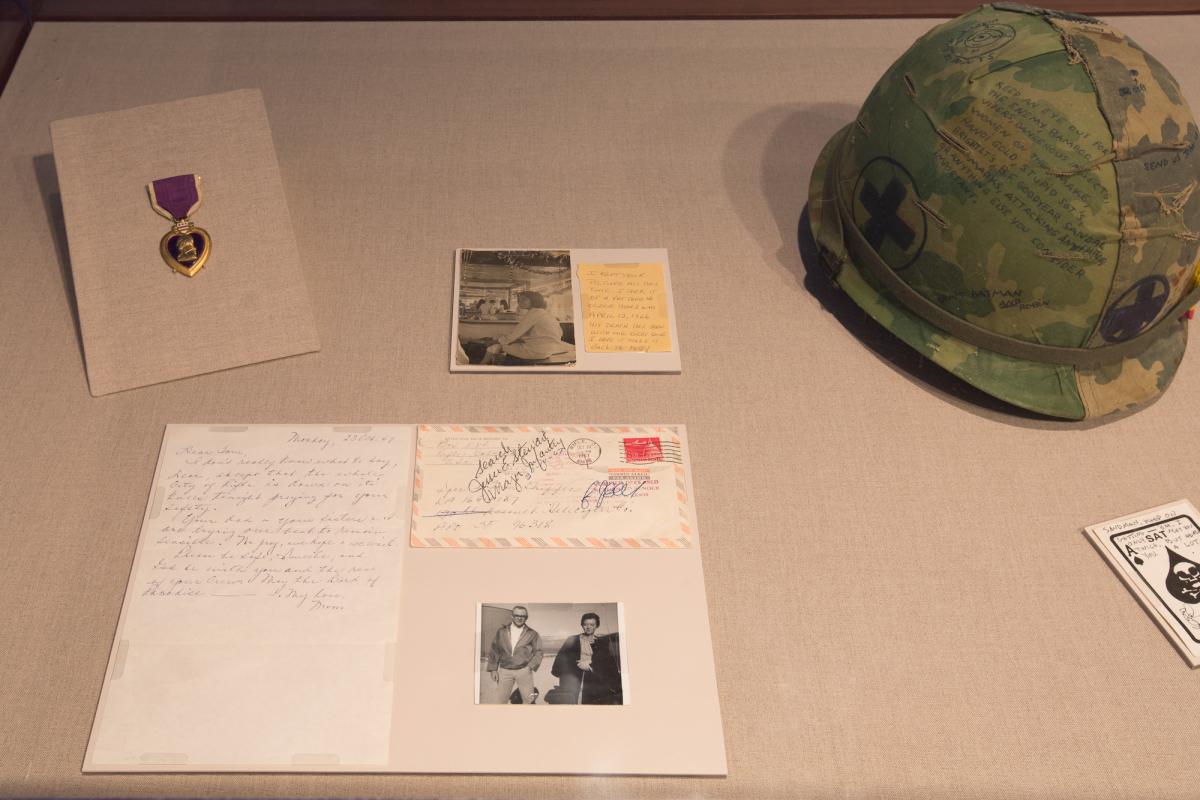 So, Merrell made some calls and wrote some emails, juggled commitments in her schedule, and hastily booked a flight to Washington, DC, for very early the next morning—all just within hours of finding out about her grandmother’s letter and photograph featured in the exhibit.

She arrived at the museum mid-morning, greeted by Archivist of the United States David S. Ferriero and Alice Kamps, curator of the “Remembering Vietnam” exhibit. The two had heard about Merrell’s cross-country odyssey and wanted to be sure she was able to see her uncle’s mementos within the exhibit on closing day.

“I was very moved by this family member’s story, which is a prime example of how the ‘Remembering Vietnam’ exhibition connected many Americans with their history in a very personal way and helped them to learn more about this critical episode our country’s past,” Ferriero said.

Ferriero said that, as a Vietnam War veteran, the exhibit was personally very important to him, and he kept a close eye on it during the 15 months it was open.

“I wandered in often to see who was there, how they were interacting and reacting to the materials we had chosen, and listened in to the hushed conversations—parents explaining to their children, Vietnam vets comparing notes, lots of tears on every visit,” he said.

Merrell shared a family scrapbook that her grandmother had long ago created in remembrance of her uncle that had been passed down through the family. The memory book was filled with historical documents relating to her uncle and his service, including the telegram that the family received pronouncing the soldier’s death and a condolence letter from President Lyndon B. Johnson to the family. 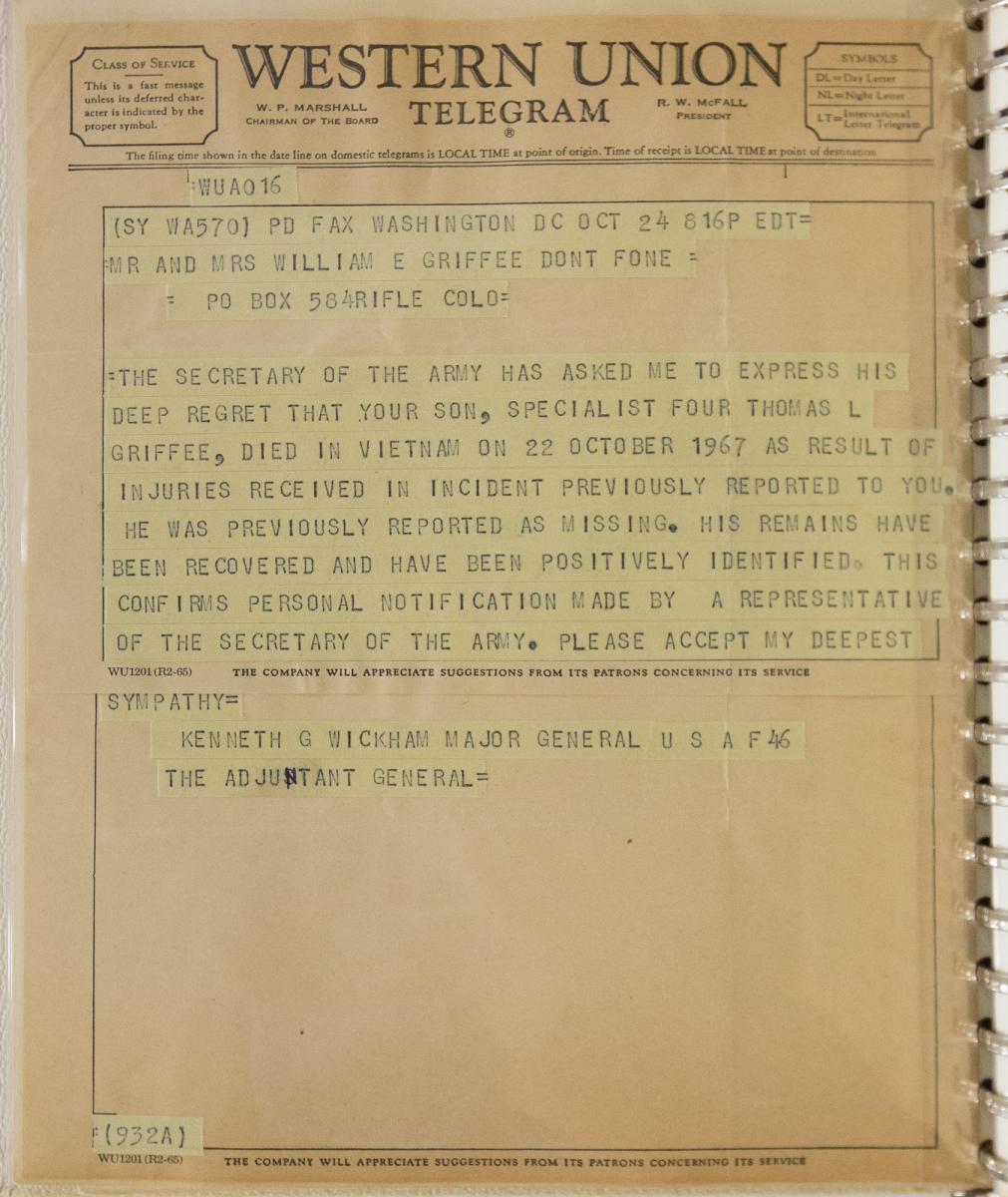 A telegram addressed to the Griffee family of Rifle, Colorado, from the United States Army announced the death of U.S Army Specialist 4 Thomas L. Griffee during the Vietnam War. Caitlin Merrell, Griffee's niece, shared the telegram during a recent visit to the National Archives' "Remembering Vietnam" exhibit in Washington, DC.(National Archives photo by Jeffrey Reed)

As Ferriero, Kamps, and Merrell talked about her uncle and his service to his country, Merrell expressed her excitement in seeing the artifacts that she had traveled to see. She expressed how important the scrapbook was to her grandmother to “keep his memory alive.”

“We are a very patriotic family,” Merrell said. “This means so much to have my Uncle Tom and my grandmother’s letter included to help tell the story of the Vietnam War. Thank you for choosing it to be included. This means a lot to our family.”

Kamps then personally escorted Merrell through the exhibit to see the artifacts she traveled so far to see. Merrell spent several minutes just “soaking it all in,” as she remarked while reading the letter.

Merrell shared that her mother, Melinda Merrell, had actually left the letter and photograph in 1999 at the Vietnam Memorial Wall near her uncle’s name that is forever etched in granite. They were visiting the memorial for the first time during a school field trip.

Kamps explained that the letter became property of the National Park Service when it was left at The Wall and then entrusted to the National Archives for inclusion in the exhibition. She shared with Merrell that she remembered "selecting the letter because of the way [Kathyrn Griffee] expressed herself. Her brave struggle to remain hopeful when her son went missing was evident and heartbreaking.”

She added that the attached photograph—which depicts mother and son before he went off to war—really “authenticates the effect the war had on people’s lives and their loss. It truly brought the letter to life.”

“It isn't every day that I get to witness the personal impact of our work on individuals,” Kamps said. “I can't imagine a more meaningful way to spend the last afternoon than with someone who flew halfway across the country to see the exhibit before it closed.

“And if I ever need to remind myself that what we do in the National Archives museum is significant,” Kamps continued, “I will recall the moment Caitlin put me on the phone with her aunt, Stephanie Hyrup, whom she said never spoke of her lost brother. Hyrup wept as she thanked the National Archives for honoring Tommy's memory. Tears that she said were cleansing.”

More than 310,000 visitors toured the exhibit commemorating the Vietnam War during its run. It featured records in the National Archives’ holdings as well as interviews with historians, American and Vietnamese military, and civilians to describe 12 critical episodes in the Vietnam War from Truman Sides with France (1946–53) to the Fall of Saigon in 1975.

The title of the exhibit comes from an important book by the Vietnamese-American writer Viet Thanh Nguyen—Nothing Ever Dies: Vietnam and the Memory of War—in which he reminds us that wars are fought twice, once on the battlefield and once in memory.

Looking back, Ferriero shared his feelings about the exhibit's impact and success.

“Early on the morning after the exhibit closed and just before deinstallation began, I had my last walk-through,” Ferriero said. “It was a powerfully emotional experience, as it was during my first walk-through before the exhibit opened. I’m proud of what we accomplished!” 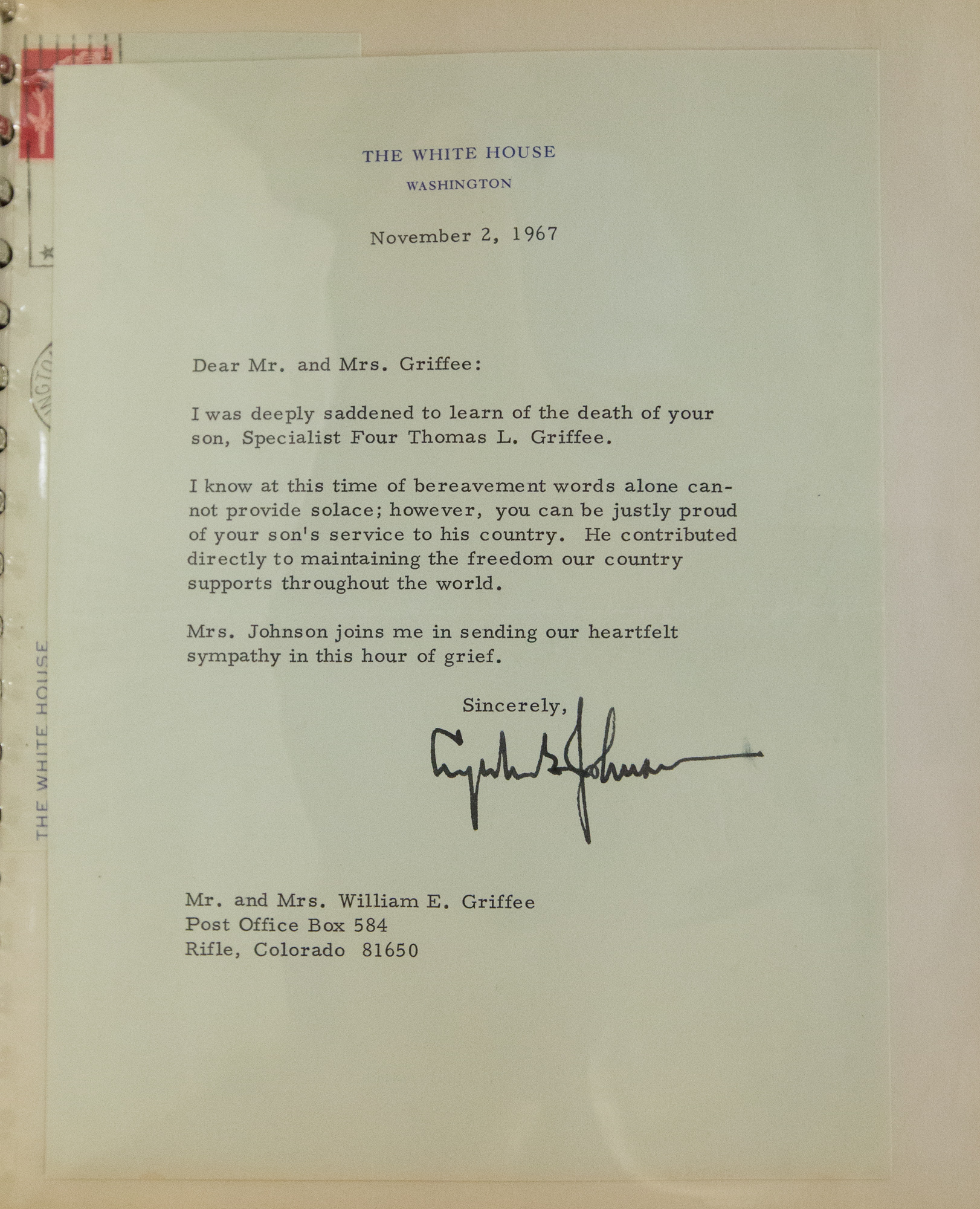 President Lyndon B. Johnson wrote a letter of condolence to the Griffee family of Rifle, Colorado, for the loss of their son, Specialist 4 Thomas L. Griffee of the United States Army during the Vietnam War. Caitlin Merrell, Griffee’s neice, shared the letter during her recent visit to the National Archives’ “Remembering Vietnam” exhibit. (National Archives photo by Jeffrey Reed)

Caitlin Merrell of Denver, Colorado, shared her family’s memory album and a copy of an award that her uncle, Specialist 4 Thomas L. Griffee of the United States Army, received during the Vietnam War. Merrell recently trekked across the country to visit on the final day of the National Archives’ “Remembering Vietnam” exhibit. (National Archives photo by Jeffrey Reed)

Caitlin Merrell of Denver, Colorado, recently trekked across the country to see her uncle’s memorabilia that was included in the National Archives’ “Remembering Vietnam” exhibit. (National Archives photo by Jeffrey Reed)

Archivist of the United States David S. Ferriero greets Caitlin Merrell of Denver, Colorado, during her recent trek across the country to see her uncle’s memorabilia in the National Archives’ “Remembering Vietnam” exhibit. (National Archives photo by Jeffrey Reed)

Caitlin Merrell of Denver, Colorado, recently trekked across the country to see her uncle’s memorabilia that was included in the National Archives’ “Remembering Vietnam” exhibit. (National Archives photo by Jeffrey Reed)

Thomas L. Griffee and his mother, Kathryn Griffee, from Rifle, Colorado, pictured prior to his service with the U.S. Army in Vietnam. The photo was part of the exhibit, "Remembering Vietnam" at the National Archives in Washington, DC. (National Archives photo by Alice Kamps)

Kathryn Griffee wrote this letter to her son, U.S. Army Specialist 4 Thomas L. Griffee, just days after learning of his loss in Vietnam. The letter was included in the "Remembering Vietnam" exhibit at the National Archives in Washington, DC. (National Archives photo by Alice Kamps)

Marked "return to sender" and "verified deceased," this envelope contained the unread letter Kathryn Griffee wrote to her son, U.S. Army Specialist 4 Thomas L. Griffee, during his service in Vietnam. The letter and envelop were part of the exhibit "Remembering Vietnam" at the National Archives in Washington, DC. (National Archives photo by Alice Kamps)