WASHINGTON, June 15, 2018 — What do flying saucers, mythical creatures, the lunar landing, Santa Claus, and secret codes have in common? Thirty-five visitors to the National Archives Museum found the answer through a series of clues, cyphers, and puzzles hidden within the Public Vaults exhibit. 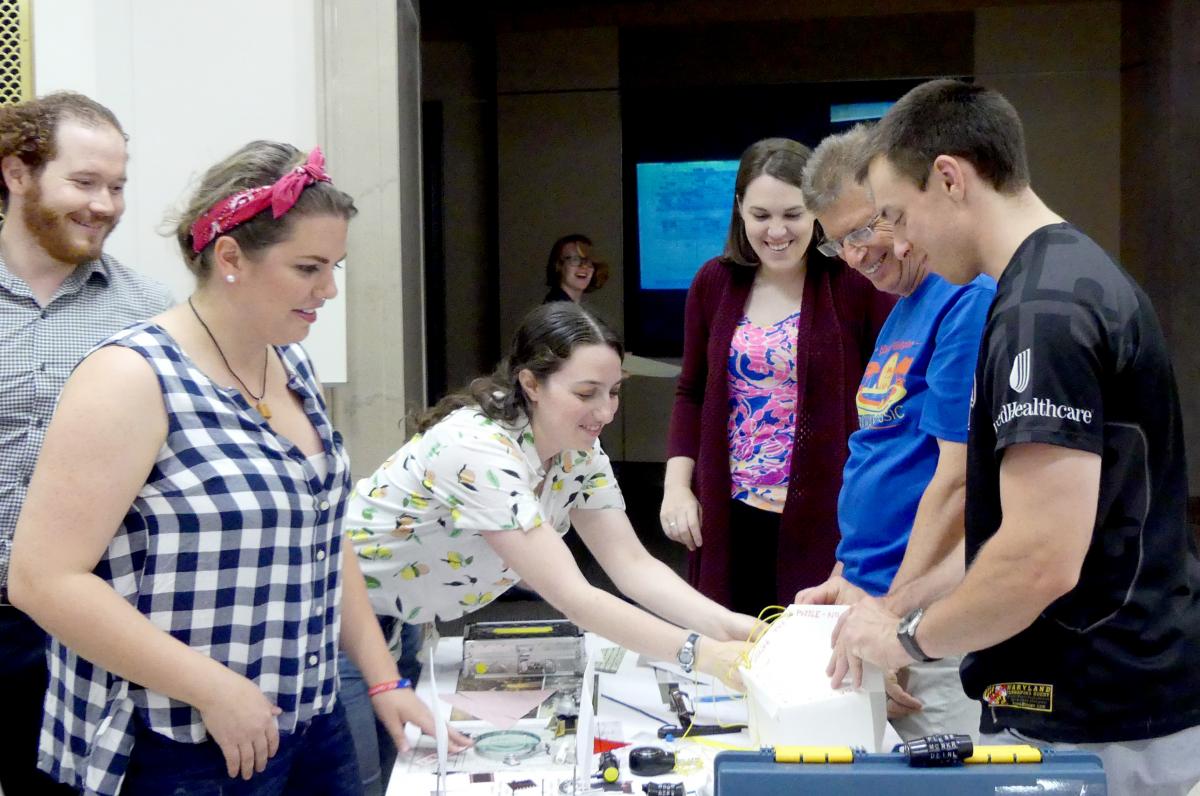 Members of "Team Yellow" pour over gathered clues and puzzles to help solve the mystery at the recent educational 'escape room' workshop held at the museum. (National Archives photo by Amber Kraft)

Dubbed an “Escape Room Hands-On Workshop,” the educational event for adults was held in the National Archives Museum after it closed to the public for the evening. The participants gathered in the Learning Center for a briefing on a fictitious crime and how they could intervene to prevent a catastrophe. They then broke off into teams of five or six and were assigned a team color that would help them find their color-coded clues, which were scattered and hidden throughout the Public Vaults exhibit.

Roaming through the exhibit, teams had one hour to gather the clues and solve a series of puzzles and cyphers—all with the goal of unlocking the final puzzle and foiling the catastrophe.

“When planning our education activities, we are always trying to create engaging events that allow our visitors to interact with more of our holdings, not just the founding documents for which we are best known,” Kraft added. 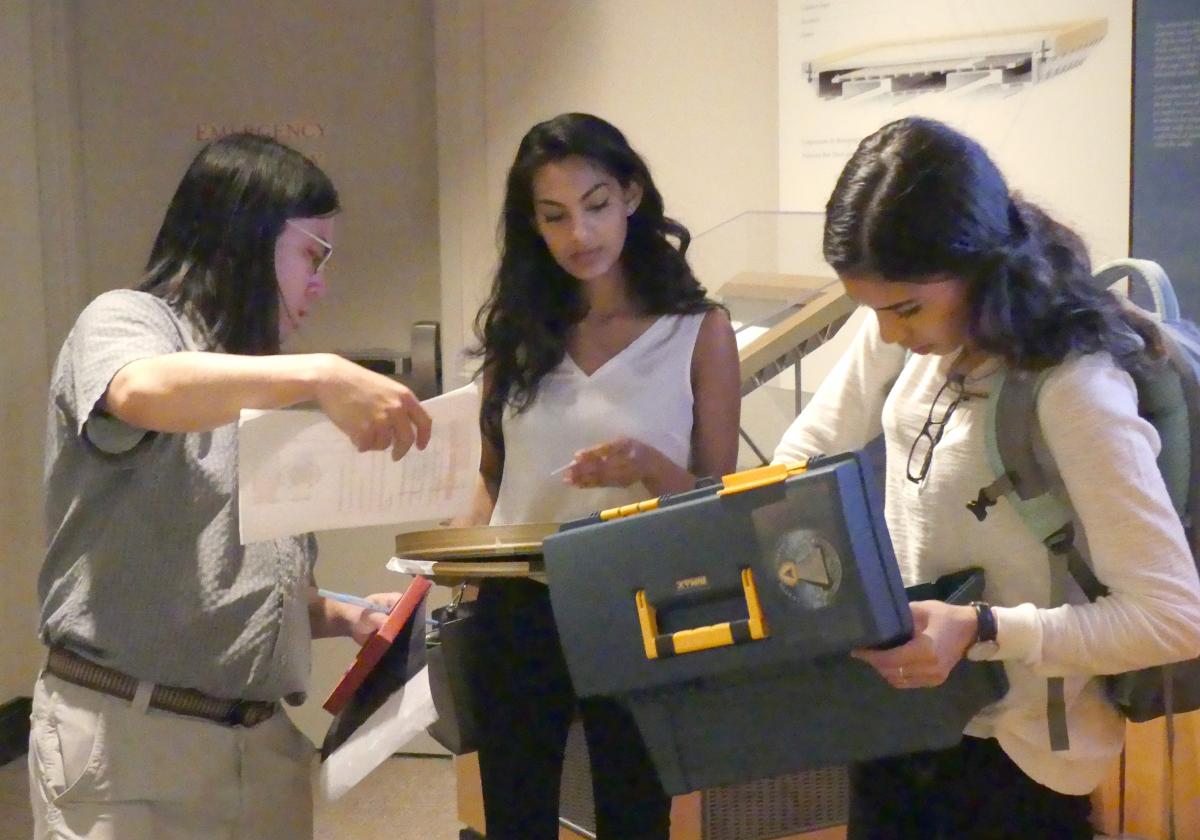 Members of "Team Black" locate a clue while searching the Public Vaults exhibit at the educational workshop. (National Archives photo by Amber Kraft)

One participant likened it to a famous movie that involved the National Archives. “It was all very ‘National Treasure-esque,’” said Hayley Lawrence of “Team Green.” “What a fun evening to hunt for clues in a museum that houses so much of our nation’s history.”

Teammate Sangeeta Rana agreed. “It made me question my own knowledge of history and documents,” she said. Rana shared that the most exciting part of the evening for her was the sense of accomplishment and excitement she experienced when she and “Team Green” were able to gather enough clues to open some of the locks and solve many of the puzzles.

“It was a great excuse to be running around the empty museum in the evening, too” Rana added.

“Team Yellow” was extremely successful in completing its mission. Ethan Alpern said, “Everybody found their own clues that they were most interested in and just ran with it,” explaining how the divide-and-conquer approach worked for his team, which ultimately came together to solve the mission.

Laurel Martin, a teammate and coworker of Alpern, explained how the event exceeded her expectations. “I was expecting it to be confined in a little conference room like other ‘escape rooms.’ I didn’t realize we’d actually be working with a lot of documents they had in the vault. I didn’t realize it would be as hands-on as it was.” 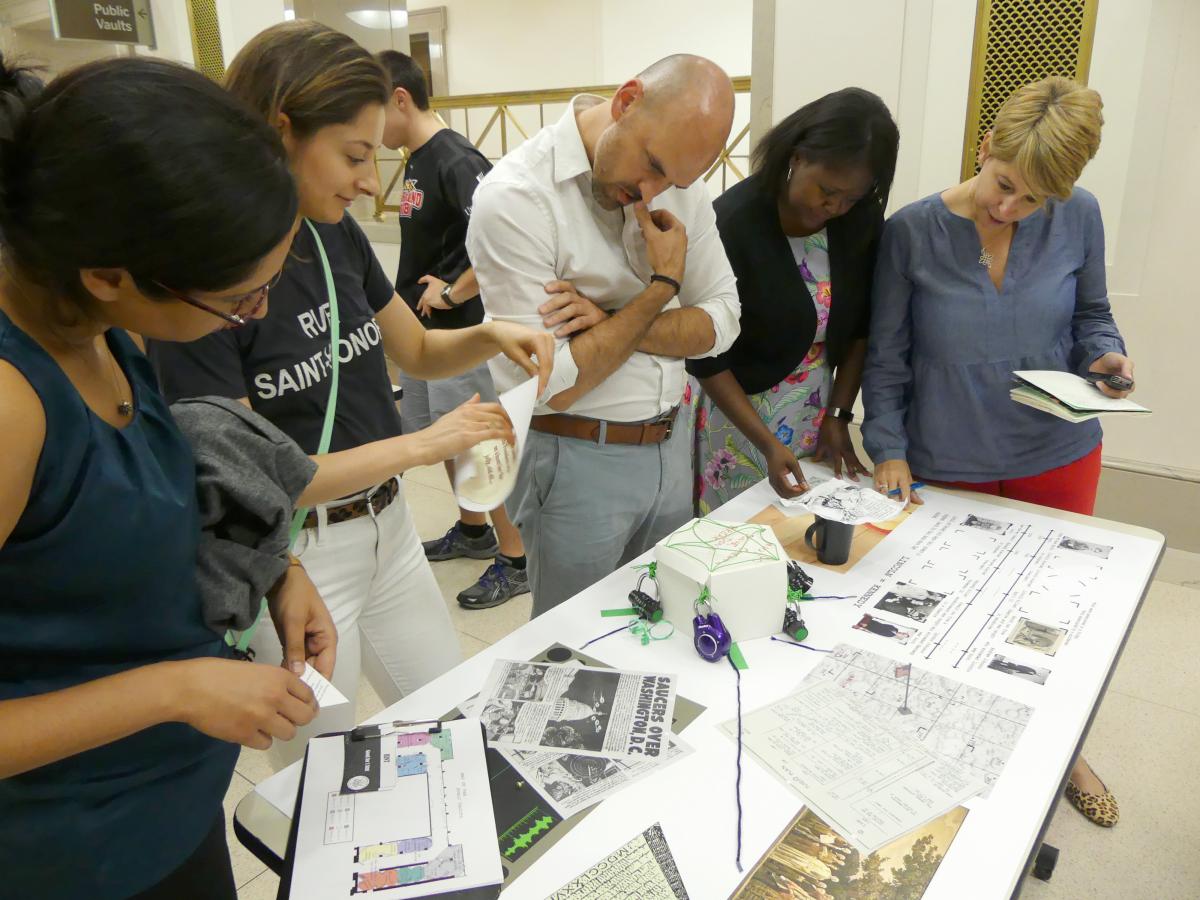 Members of "Team Green" look over gathered clues to solve some of the puzzles and cyphers at the workshop. (National Archives photo by Amber Kraft)

The escape rooms and puzzle programs started in 2016 with an event highlighting National Park Service records for its centennial. Kraft said that program was “a huge hit with a waiting list to fill it three or four more times.” The education team offered it again that summer, and continued success encouraged them to develop new programs in 2017 and 2018.

This event will be offered again on August 8 at the museum. Registration is limited and is likely to fill up fast. See the National Archives online Calendar of Events for registration links to the next “escape room” and other adult educational workshops.