As of the end of November, the National Archives and the NHPRC are operating under a Continuing Resolution (which limits our capacity to award grants). Because we do not have a final budget for the fiscal year, the Commission is not able to finalize or announce any award decisions for those projects recommended at its November 2011 meeting. When a final budget is passed, we expect to make these awards.

The NHPRC and the Virginia Foundation for the Humanities, affiliated with the University of Virginia, signed a cooperative agreement at the end of September to provide pre-publication access to 68,000 historical papers of John Adams, Benjamin Franklin, Thomas Jefferson, James Madison, and George Washington that have not yet been published in authoritative documentary editions. The cooperative agreement provides up to $2.5 million for the project.

The Virginia Foundation for the Humanities and its Documents Compass program are carrying out this three-year project. Documents Compass, a program specializing in documentary editing in the electronic age, will update and improve existing transcriptions of the papers of the Founders of the Nation and make them available online through a new web site. This work builds on its successful 2009 pilot project, funded through an NHPRC grant, which put online 5,000 unpublished documents from the Papers of James Madison and the Papers of John Adams.

This project expedites availability of the unpublished papers, giving scholars and the general public access to these primary source materials before they appear in the official print editions produced by six separate documentary editing projects. As new authoritative volumes are published in future, the final transcriptions with explanatory notes will replace the pre-publication transcriptions. "This is a remarkable opportunity to make available to the public these very important historical documents in a timely and easily accessible manner," says Rob Vaughan, president of the Virginia Foundation for the Humanities.

Providing access to the unpublished transcriptions is the second stage of the Founders Online Initiative undertaken by NHPRC in 2010. The first stage, currently underway, is being carried out by the University of Virginia Press to provide free online access to over 120,000 historical documents included in the published documentary editions for these key figures of the U.S. founding era. Users will be able to access both the published, annotated documents and the unpublished transcriptions through the Founders Online web site.

David S. Ferriero, Archivist of the United States, notes, "These documentary editions provide a treasure trove of information about the founding of our nation. The historical documents contain fascinating details about the thoughts, deeds, and lives of these seminal figures. This agreement ensures that we leverage the latest technology and processes to ensure that all Americans can access and use these papers."

Changes to the Commission

The Honorable Jeremy D. Fogel, Director of the Federal Judicial Center, has been appointed by Supreme Court Chief Justice John Roberts to represent the Federal judiciary on the NHPRC. Previously a judge for the U.S. District Court of Northern California, Judge Fogel replaces Judge Barbara Jacobs Rothstein, who had served on the Commission since 2006.

In addition to Judge Rothstein, three other members of the Commission ended their service at the November 2011 meeting. Deanna Marcum, representing the Librarian of Congress, joined the Commission in 2003, and she had also served from 1993-95. Nancy Davenport, director of library services at the District of Columbia Public Library System, had served for five years as a Presidential appointee. Senator Benjamin L. Cardin of Maryland had served since 2008 as representative from the United States Senate. 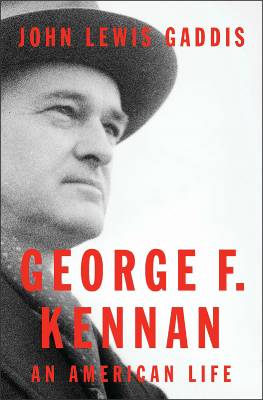 George F. Kennan: An American Life by Yale historian John Lewis Gaddis was published this month by The Penguin Press and immediately drew wide media attention. The New York Times Book Review devoted five pages on November 13, 2011 to a Henry Kissinger review, calling the historical biography a "magisterial work . . . as close to the final word as possible on one of the most important, complex, moving, challenging and exasperating American public servants."

Kennan, who played a key role in shaping American foreign policy of containment of the Soviet Union during the Cold War, was one of the central figures of 20th century history. Best known for the famous "Long Telegram" from Moscow and the subsequent "X" article in Foreign Affairs, Kennan exerted considerable influence up to his death, at the age of 101, in 2005. 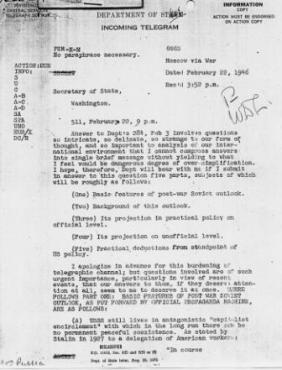 First page of the telegram from George Kennan Charge d Affaires at United States Embassy in Moscow to the Secretary of State, The Long Telegram, 02/22/1946. National Archives, Record Group 59: General Records of the Department of State.

In the early 1980s, Gaddis approached Kennan about writing just such a biography, and he was granted exclusive access to Kennan's personal archives, which were subsequently acquired by the Seely G. Mudd Library at Princeton University. With a grant from the NHPRC, the entire collection was processed and open to the public in 2009. The grant also enabled the Library to process the James V. Forrestal Papers. 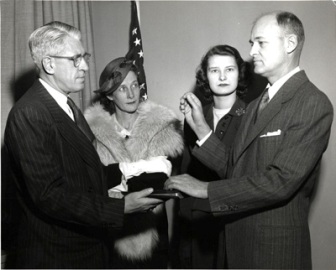 George F. Kennan taking the oath of office as Ambassador to the U.S.S.R. in April 1952, with his wife Annelise and daughter Grace looking on. Courtesy Mudd Manuscript Library, Princeton University

Line drawing of a young Sam Gompers from the project website.

The final volume of the Samuel Gompers Papers, long supported by the NHPRC, was published in November by the University of Illinois Press. This documentary edition is now complete in 12 volumes, and it is a fascinating account of the rise of trade unionism in America during the late 19th and early 20th centuries. 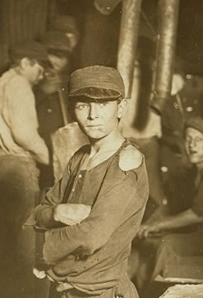 Samuel Gompers was president of the American Federation of Labor for almost forty years, between 1886 and 1924, and the nation's leading trade unionist and labor spokesman. A cigarmaker by trade, an intellectual by nature, and a skilled organizer and administrator by vocation, Gompers dedicated his life to the working class. He was a passionate advocate of shorter hours, higher wages, safe and sanitary working conditions, and collective bargaining with employers. And he believed that strong, well-financed trade unions would humanize industry, protect workers' interests, and in the process, create opportunities for workers to educate themselves and claim a larger role in industrial society.

The Samuel Gompers Papers project at the University of Maryland also provides numerous resources for teachers for classroom use. 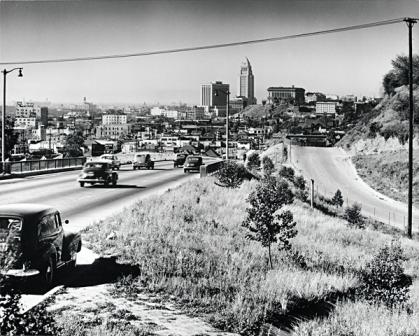 View of Downtown from the Pasadena Freeway, Julius Shulman, 1949.

With help from an NHPRC grant, the Getty Research Institute (GRI) has begun a two year project called "Living the American Dream: Housing and Urban Development in Los Angeles, 1936-1997." Archivists will digitize and make available online approximately 60,500 images from the Leonard Nadel Papers and the Julius Shulman Photography Archive. These two photograph collections document the growth of housing and urban development in California and the Midwest from 1936 until 1997.

The GRI acquired the Nadel papers in 2002. They include two photograph albums, photographs, contact prints, negatives, and related paper documents that highlight the lives of the disadvantaged during the post-World War II era and illustrate the story of two early federally-funded housing projects, the Pueblo del Rio project and the racially integrated Aliso Village, which was designed by Frank Lloyd Wright in 1942. The collection also features the photographer's image surveys of slums and historic areas targeted for demolition and revitalization including Bunker Hill, Chavez Ravine, and Elysian Park. Nadel's portraits of ethnically diverse public housing residents illustrate the impact housing reform had on the Los Angeles community.

The GRI acquired the Julius Shulman archive in 2004. In total this archive contains 240 linear feet or 265,000 images arranged in five series of Julius Shulman's prints, contact prints, negatives, transparencies, and related paper material. Staff has already scanned 6,000 images from Series II and III. This project will scan Series IV of the collection. The series includes images of structures by notable architects including Ludwig Mies van der Rohe, Louis Kahn, and Philip Johnson as well as buildings designed by architects in Southern California, Texas, Iowa, Oklahoma, and the American Midwest.

Nadel and Shulman captured dissimilar views of the city. For instance, Nadel photographed Los Angeles's Bunker Hill neighborhood before clearance of the slums, and Shulman photographed it after revitalization. Of the two collections, the Shulman photographs have been used more by researchers and images have appeared in several recent exhibits about Los Angeles neighborhoods, landscapes, art and architecture. Since 2005, reference librarians have logged over 2,000 email messages about the collection from historians and students of American society and culture, the development of Los Angeles and Southern California, urban planning, and architecture as well as conservationists, civic planners, and property owners. 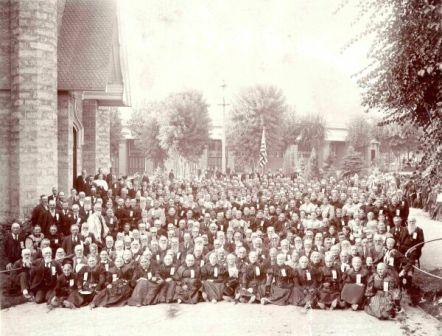 The State and National Archival Partnership program helps state historical records advisory boards in a number of ways -- from providing statewide training programs to collaborative initiatives to regrants to small and local community organizations. In Utah, a SNAP grant help the Utah State Historical Records Advisory Board award the following grants in FY 2011:

For more information on the Utah state archives and historical records advisory board, go to http://www.archives.state.ut.us/ 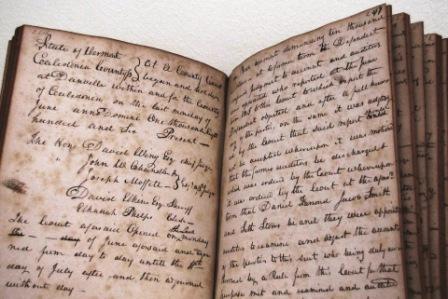 In 1978, the Vermont Supreme Court received a grant from the NHPRC to identify, describe, and reformat approximately 41 cubic feet of court records created prior to 1825, but little has been done since that project to improve the preservation of and access to court records in the state. The Vermont legislature recently reorganized the state's court system and one agency, the Office of Court Administrator, has administrative authority over all courts. The result has been the development of a comprehensive records management program and an agreement with the Vermont State Archives and Records Administration (VSARA) to accession all county court records created prior to 1945 into the State Archives.

In 2011, VSARA received a grant to preserve and make more accessible archival court records of the northern counties of Caledonia, Lamoille, and Orleans. These records cover the period 1794 to 1945 and include 575 volumes of docket and record books and 330 cubic feet of case files, for a total of 446 cubic feet of records. Both criminal and civil cases are documented in the records. Because the Vermont Supreme Court rode circuit until 1906, that court's files appear among these records and they will be processed as well. The records not only document the judicial system over a period of 150 years, they also provide perspectives on crime and punishment, economics, and all facets of social history. 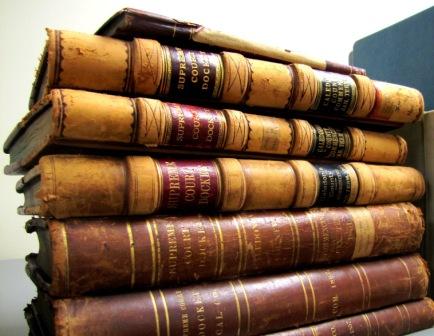 Because the counties are near the Canadian border, the records document the immigrant experience and the interaction of different cultures in the borderlands. Evidence can also be found of the agricultural booms and busts taking place in the rural areas of the counties, as well as the expansion of railroads and industrial development in the more populous areas. The project will arrange and describe these records in order to re-establish the intellectual connection between the docket books, record books, and case files so that researchers will have the necessary access points to identify relevant records.