Archivist of the United States David S. Ferriero has awarded 32 grants totaling $1,822,946 to projects being undertaken in 26 states and the District of Columbia. The National Archives grants program is carried out through the National Historical Publications and Records Commission (NHPRC). A complete list of grants is at http://www.archives.gov/nhprc/awards/awards-11-15.html.

Publishing grants totaling nearly $482,532 went to 4 publishing projects from the U.S. Colonial and Early National Period: the papers of John Adams, Dolley Madison, the Documentary History of the Ratification of the U.S. Constitution, and the Documentary History of the First Federal Congress. The Commission also funded its ongoing cooperative agreement with the University of Virginia to support Founders Online, which provides free online access to the papers of the United States of America's founders.

Grants totaling $621,761 went for State Board Programming grants to enable 21 state historical records advisory boards to carry out their mission to support archival education and strengthen the nation's archival network.

Access to Historical Records grants, totaling $718,653, went to 7 projects to make accessible the records of James D. Bales and the Red Scare at the University of Arkansas, Fayetteville; collections on the history of legalized gambling at the University of Nevada, Las Vegas; railroad history at the Kheel Center for Labor History at Cornell University; photographs documenting Prohibition and the Great Depression in St. Louis through the Missouri Historical Society; voter registration in the American Southwest through the University of Texas, San Antonio; 13 key collections documenting the history of the Wildlife Conservation Society; and rare transcription discs recorded from the 1930s to the 1960s held by the Country Music Foundation.

The Archivist of the United States is the Chairman of the 15-member Commission, which includes representatives from all three branches of the Federal government as well as the leading archival and historical professional associations. Kathleen Williams is the Executive Director.

The National Historical Publications and Records Commission enhances public access to historical records collections nationwide. The Commission works with state and local governments, historical societies, colleges and universities, and other nonprofit institutions in leading these access efforts through a modest but catalytic grants program. Through its unique position of public outreach, the Commission provides the opportunity to connect the work of the National Archives with the work of the nation's archives.

President Franklin D. Roosevelt signed the Commission and the National Archives into law in June 1934

From its inception in 1934 as part of the National Archives, the National Historical Publications and Records Commission has focused on the preservation and use of historical records collections in the United States. The Commission has long played a leadership role in meeting the challenges of broadening access to these collections through preservation and access projects, research and development initiatives, and best practices and new methodologies.

Early years were spent spurring the initial development of historical documentary editions. Beginning in the 1960s, the Commission made access happen through its critical support for publishing historical records collections in print and microfilm. It advanced best practices and new methods through the development of the Institute for the Editing of Historical Documents and more recently the Archives Leadership Institute. It proved instrumental in its early investments on electronic records research, encoded archival description, the "More Product/Less Process" protocols, the creation of state historical records advisory boards, the National Forum on Archival Continuing Education, and much more.

Leadership efforts remain a hallmark of the NHPRC. With this in mind, at their November 2015 meeting the members of the National Historical Publications and Records Commission approved a draft framework for a new Strategic Plan. Through collaboration with the National Archives, other Federal agencies, and private funders, the Commission seeks to enhance its national leadership role, continue its support of our partners in the states, historical documentary editions, and professional development and training, and expands programs designed to enhance public participation in preserving and using historical records collections.

Mission
The National Historical Publications and Records Commission provides opportunities for the American people to discover and use records that increase understanding of our democracy, history, and culture.

Vision
Through leadership initiatives, grants, and fostering the creation of new tools and methods, the National Historical Publications and Records Commission connects the work of the National Archives to the work of the nation's archives. The Commission acts as a bridge for innovation and creativity in advancing best archival practices, publishing historical records, and connecting citizens to their records.

GOAL: Connect the National Archives with the work of the nation's archives.
The Commission plays a key national leadership role in developing and promoting best practices, model programs, and partnerships among the nation's vast network of archives and documentary editing projects. The Commission will collaborate with other funders to create leadership initiatives designed to solve problems and meet challenges.

GOAL: Engage the American people in preserving the American record.
Democracy requires an informed citizenry able to discover and use those records critical to understanding American democracy, history, and culture. Archivists and documentary editors are also encouraging people to acquire skills necessary to preserve and make accessible historical records. The Commission will collaborate with archives, repositories, and historical records publishing projects to engage more directly with people in their communities and online.

GOAL: Enhance the capacity of small and diverse organizations with historical records collections.
The Commission seeks to encourage small and diverse organizations with historical collections that represent the rich diversity of America's culture and history and to assist small repositories with tools to raise their capacities.

We invite public comment on the revised framework by February 1, 2016. Go to our Annotation blog to share your thoughts. 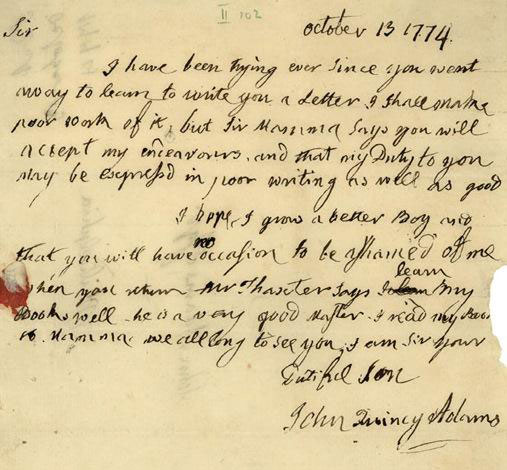 The Sound of the Genuine

"There is something in every one of you that waits and listens for the sound of the genuine in yourself. It is the only true guide you will ever have. And if you cannot hear it, you will all of your life spend your days on the ends of strings that somebody else pulls." -- Howard Thurman, Spelman College commencement 1980 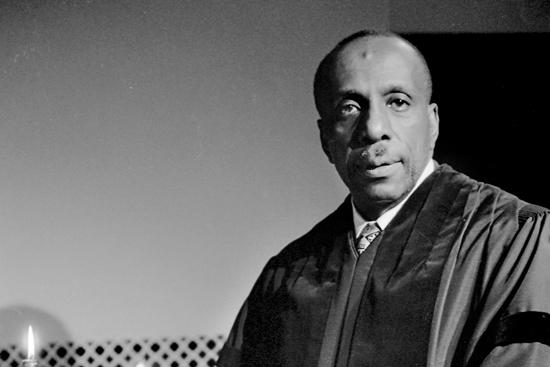 Howard Washington Thurman (1899—1981) played a leading role in many social justice movements and organizations of the 20th century. He was one of the principal architects of the nonviolent civil rights movement and a key mentor to Dr. Martin Luther King, Jr. The NHPRC supports the Papers of Howard Thurman, a documentary editing project at Boston University dedicated to preserve and promote Thurman's vast documentary record, which spans 63 years and consists of approximately 58,000 items of correspondence, sermons, unpublished writings, and speeches. You can visit the project's website at http://www.bu.edu/htpp/.

Hot of the presses is Volume 3 of the Papers, entitled The Bold Adventure and covers the span from September 1943 to May 1949. In 1944, Thurman co-founded San Francisco's Church for the Fellowship of All Peoples, the first integrated, interfaith religious congregation in the United States.

The Battle of the Little Bighorn in 1876, in which the Sioux and Cheyenne Indians defeated the 7th Cavalry led by George Armstrong Custer once served, in the words of critic Michael A. Elliott as "a touchstone of heroic sacrifice, celebrated in paintings, poems and live performances" and later became symbolic of hubris and racism behind a tragic policy. 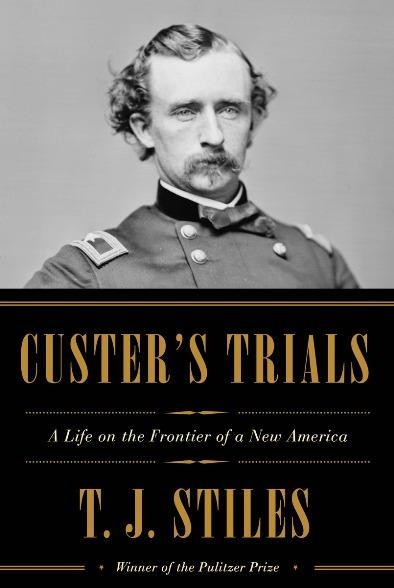 In his new book, Custer's Trials: A Life on the Frontier of a New America, T.J. Stiles offers a sweeping portrait of the man and his times. From his trials at West Point through his role in the Civil War to the backroom deals and political wranglings that preceded the infamous Last Stand, Custer emerges from the biography as a complex and flawed figure. Among Stiles's sources are three major collections supported by the NHPRC: the Papers of Ulysses S. Grant, the Papers of Andrew Johnson http://millercenter.org/president/johnson/papers) -- both of whom had startling connections to Custer -- and the Papers of the Northern Pacific Railway Company . Stiles also used several collections held by the National Archives -- a stellar example of the connection between the Commission and our federal agency. 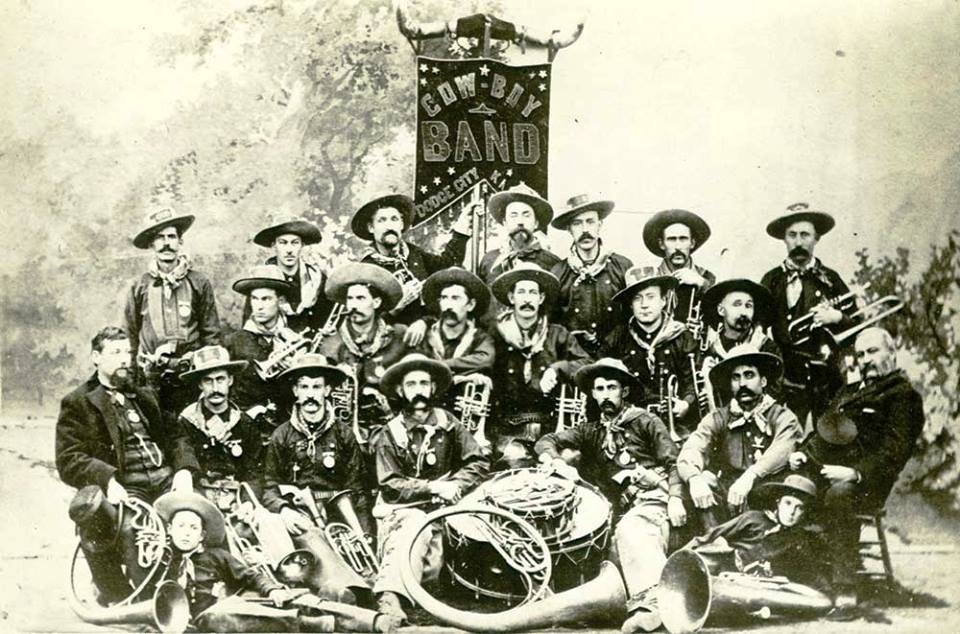 Enlarge
A formal view of the manager and members of the Dodge City Cowboy Band of Dodge City, Kansas, 1886

The Dodge City Cowboy Band began playing in 1879 to promote Dodge City, Kansas and the cattle interests of its citizens. Organized and first led by Chalk Beeson, owner of the Long Branch Saloon, the band dressed in traditional cowboy outfits including hats, bandanas, chaps and spurs. The band became quite popular as a symbol of the Old West and performed across the country, including the inauguration of President Benjamin Harrison in 1889.

The band was comprised of professional musicians from Chicago, Denver, Kansas City, and St. Louis. Pueblo, Colorado Police Officer Jack Sinclair became the director in 1890. Sinclair used an ornate Single Action Army revolver as a baton to lead the band. He would fire blanks to punctuate the band's performance, and he often joked that he would also use the gun "to shoot the first man who played a false note."

The Dodge City Cowboy Band was appointed as regimental band for the 2nd U.S. Cavalry in Cuba during the Spanish American War. In 1916, Sinclair composed their final performance, an opera titled "The Cowboy's Dream," starring his daughter Edith Frances Sinclair as the main character, Prairie Flower.

The revolver and other artifacts, along with the organization's records, are at the Autry National Center, Autry Library, and the collection was processed through a grant from the NHPRC. You can read the Finding Aid at Online Archives of California and find out more about the Cowboy Band's history at the Autry.

Lucy Rider Meyer (1849-1922) was a well-known leader in Christian social service and religious education as well as a physician, chemistry professor, and hymn writer. Her deaconess work has been often compared to Jane Addams' settlement house movement. With a vision to train lay Christian women intellectually and help them provide health and social services among the urban poor, she along with her husband, Josiah Shelley Meyer, founded the Chicago Training School for Home, City, and Foreign Missions in 1885 and served as its first principal until 1917.

Not content with merely having a school to train women in missions, Rider Meyer submitted a resolution to the 1888 General Conference of the United Methodist Church in order to create the licensed ministry of Deaconesses. Her resolution passed and licensed deaconesses and home missioners are part of the work of the church.

Supported in part by an award from the Illinois State Historical Records Advisory Board, through the NHPRC, a digital collection of the Lucy Rider Meyer Archives is finally made available to the public. You can check out her papers through the Consortium of Academic and Research Libraries in Illinois (CARLI).

Viewers of this collection are encouraged to take a look at the Chicago Training School Archives.