The Archival Projects category is designed to expand the diversity of our grantees and seeks applications for projects to ensure online public discovery and use of historical records collections. Projects may preserve and process historical records to:

The NHPRC encourages organizations to actively engage the public in the work of the project.

A grant is for one or two years and for up to $100,000. The Commission expects to make up to 10 grants in this category for a total of up to $700,000. Cost-share requirements were changed to encourage more applications. The Commission will provide up to 75 per cent of total project costs in the Access to Historical Records: Archival Projects category.

Draft applications are due September 29, 2016, with a final application deadline of December 6, 2016.

The Major Initiatives category is designed to assist projects that will significantly improve public discovery and use of major historical records collections. Projects may:

We encourage collaborative projects, particularly for bringing together related records from multiple institutions. Projects that address significant needs in the field and result in replicable and scalable approaches will be more competitive. We also encourage organizations to actively engage the public in the work of the project.

A grant is for one to three years and for up to $350,000. We expect to make up to five grants in this category for a total of up to $1,000,000. The total costs of a project are shared between the NHPRC and the applicant organization. The Commission will provide up to 50 per cent of total project costs in the Access to Historical Records: Major Initiatives category.

The application process takes place in two phases. First, applicants will submit a Preliminary Proposal (five pages with a preliminary budget) by January 19, 2017. Peer review panels will rate the preliminary proposals, and by April 3, 2017, a limited number of applicants will be invited by to submit a Full Proposal by July 12, 2017.

Drawing of a petroglyph from Benjamin Henfry sent to Thomas Jefferson, c. 1798

There's always something new to find in the old documents in Founders Online. This strange creature--and others--are from a letter from Benjamin Henfrey to Thomas Jefferson [undated, but possibly 1798]:

"The rock on which these Figures are Cut is 50 miles below Fort Pit on the Nor. side the Ohio

These Curious Hieroglyphs, are Picked in lines on a very hard Black Granite rock the surface even and orizontal, the markes of a Tool was very visible in the lines

I also observed many that was evidently meant to represent the feet of Animals, and was Very natural—

The rock on which these Hieroglyphics are picked out exibits a plain surface equal to a square of about 20 Feet—the river here was deep, I put down a pole about 12 Feet and could feel the rock continue to the bottom

The man (John Hooton) who informed me of this rock says that it is the best place for Fish near his settlement and my Opinion lies that the Indians may have amused themselves in makeing those figures when fishing there and that they were Cut or Picked out at many different times, I have inquired respecting this Idea of many Savages but I never met with one who could give me any Information on the subject—"

You owe it to yourself to see the other strange creatures. 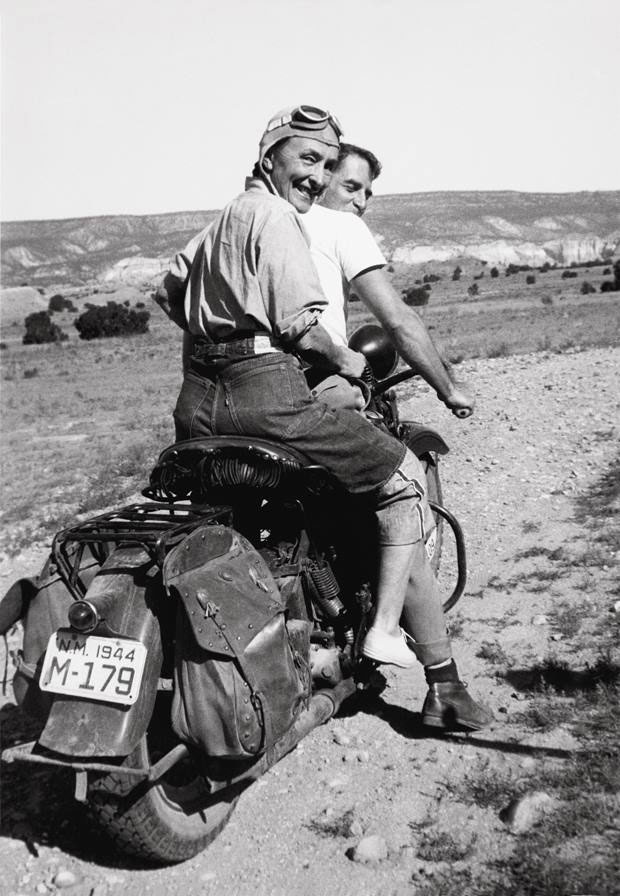 One of the highlights of any visit to Santa Fe is the Indian Market held on the central plaza. During the Depression, Maria Chabot (1913-2001) helped organize transportation for vendors to get to the marketplace in her capacity of the New Mexico Association of Indian Affairs and in cooperation with the Federal Indian Arts and Crafts Board.

Chabot had come to Santa Fe to work with the federal Works Progress Administration, which outfitted her with a Model T Ford and a Brownie camera. Her assignment was to photograph and document Native American and Spanish Colonial arts and crafts. Part of her job was visiting pueblos, Indian villages, to encourage women, especially potters, including Maria Martinez, the legendary potter of the San Idelfonso pueblo.

In 1940, she met the American painter Georgia O'Keeffe and spent several summers at O'Keeffe's house on the Ghost Ranch, 125 miles north of Albuquerque. One of Chabot’s best-known photographs is this picture of O'Keeffe hitching a ride back to Abiquiu on the back of a motorcycle.

An NHPRC grant to the New Mexico Historical Records Advisory Board enabled them to fund a number of regrants, including an award to the Georgia O'Keeffe Museum to process and make accessible Maria Chabot's Papers, acquired in 2013. The scope of the project is to process and describe 144 cubic feet of materials and create an online finding aid. 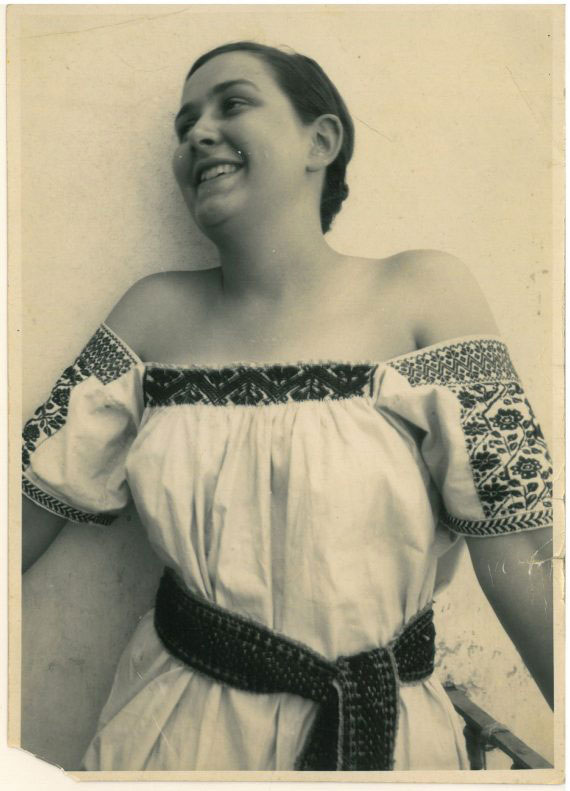 Some of their letters have been published, including this one from O’Keeffe describing the view from her airplane window: "It is breathtaking as one rises up over the world one has been living in -- looking out at -- and look(ing) down at it stretching away and away. The Rio Grande -- the mountains -- then the pattern of rivers -- ridges -- washes -- roads -- fields -- water holes -- wet and dry. Then little lakes -- a brown pattern -- then after a while as we go over the Amarillo country a fascinating restrained pattern of different greens and cooler browns -- on the square and on the bias with a few colored shades and many lakes. It is very handsome way off into the level distance, fantastically handsome -- like marvelous rug patterns or maybe Abstract Paintings."

Read more about Chabot's role in developing the Santa Fe Indian Market at the website for the Georgia O'Keeffe Museum.

Princeton and the Cold War 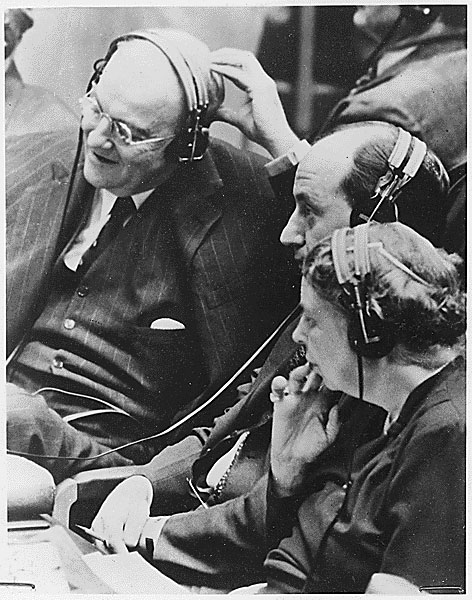 The Cold War is an umbrella term for the political and military tension between powers in the Western Bloc (the United States, its NATO allies and others) and powers in the Eastern Bloc (the Soviet Union) in the decades following World War II. Princeton University's Mudd Library has completed its NHPRC project to digitize the most frequently accessed portions of six highly-used collections documenting United States foreign policy and the origins of the Cold War. The six collections are:

All of the series and subseries selected for digitization— nearly 375,000 pages of documents— are freely available to view and download from Princeton University’s Mudd Library finding aids site.

Now individuals anywhere in the world can read John Foster Dulles's first major speech outlining the policy of "massive retaliation," George Kennan's unsent letter to Walter Lippmann regarding containment, Adlai Stevenson at an emergency meeting of the United Nations Security Council during the Cuban Missile Crisis, and a myriad of other one-of-a-kind materials from any computer or device, at any time of day.

Read how the archivists accomplished the task at the Mudd Manuscript Library Blog. 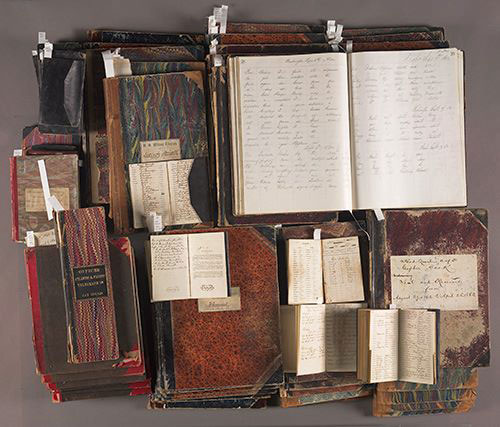 Here's your chance to help de-code secret telegrams sent during the Civil War.

With support from the NHPRC, the Huntington Library, Art Collections, and Botanical Gardens has launched of an innovative crowdsourcing project to transcribe and decipher a collection of nearly 16,000 Civil War telegrams between Abraham Lincoln, his Cabinet, and officers of the Union Army. Roughly one-third of the messages were written in code.

The "Decoding the Civil War" project is a partnership among Zooniverse (the largest online platform for collaborative volunteer research), North Carolina State University's Digital History and Pedagogy Project, and the Abraham Lincoln Presidential Library and Museum. You can check out the Decoding the Civil War Blog.

The Huntington acquired the exceptionally rare collection of telegrams in 2012, composed of a nearly complete archive of Thomas T. Eckert, the head of the military telegraph office of the War Department under Lincoln. The archive was thought to have been destroyed after the war and includes crucial correspondence that has never been published. Among the materials are 35 manuscript ledger books of telegrams sent and received by the War Department, including more than 100 communiques from Lincoln himself. Also included are top-secret cipher books revealing the complex coding system used to encrypt and decipher messages. The Confederate Army never cracked the Union Army's code.

But you can help by joining in via Zooinverse. They are looking for 75,000 volunteers.