Commemorating the Civil Rights Act of 1964

To commemorate the 50th anniversary of the signing of the Civil Rights Act of 1964 the LBJ Presidential Library and Museum hosted a three-day Civil Rights Summit, April 8 – April 10, 2014.  Along with the 1965 Voting Rights Act and the Fair Housing Act in 1968, the Civil Rights Act helped establish the legal foundation of equality among all Americans.

President Barack Obama was the keynote speaker. He was joined by the former Presidents Jimmy Carter, William Clinton, and George W. Bush.

The National Archives has partnered with the Google Cultural Institute to create a Historic Moments exhibit on the Civil Rights Act of 1964. Explore the growing civil rights movement through videos, photos, and documents. 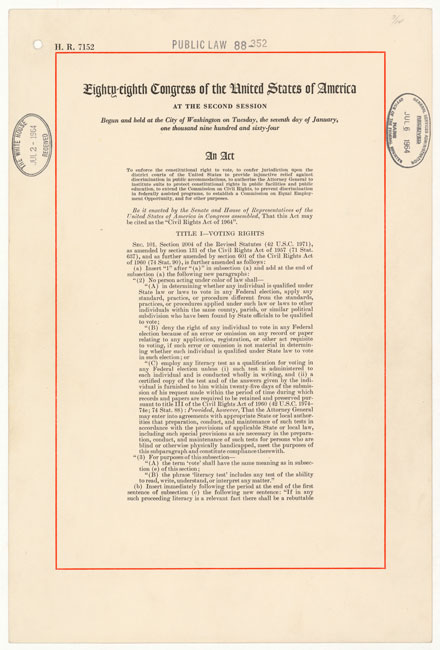 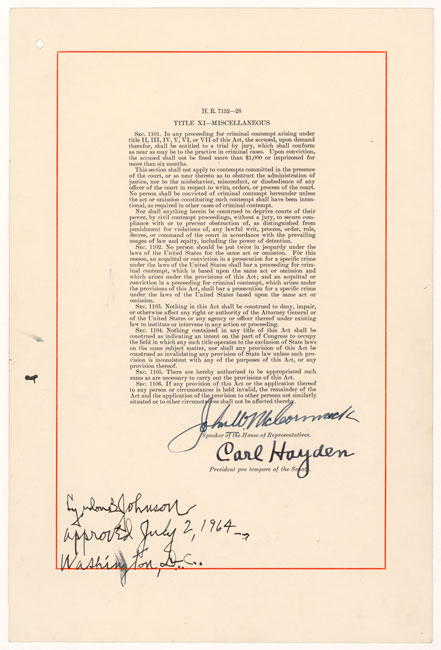 From the Lyndon B. Johnson Presidential Library and Museum. National Archives Identifier 299891. 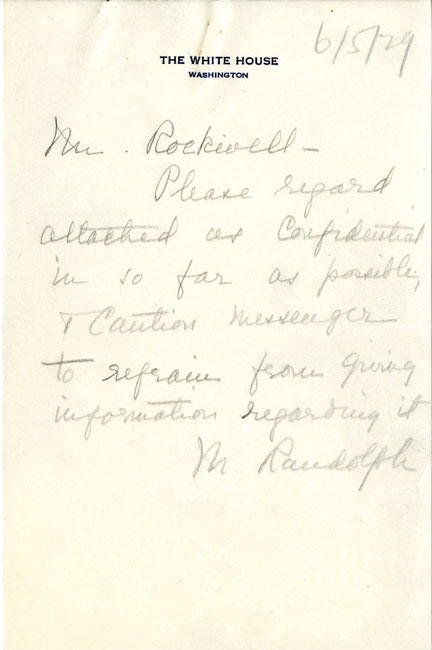 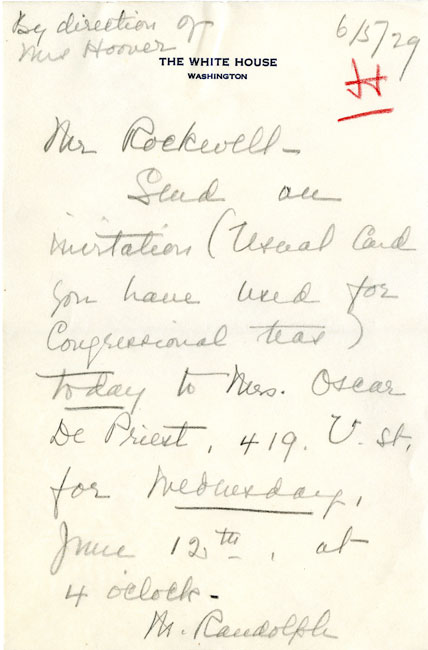 In 1929, Lou Henry Hoover invited Jessie L. DePreist, wife of the first African American elected to Congress in the twentieth century, to the White House for the traditional spouses of the members of Congress teas.

From the Herbert Hoover Presidential Library and Museum. 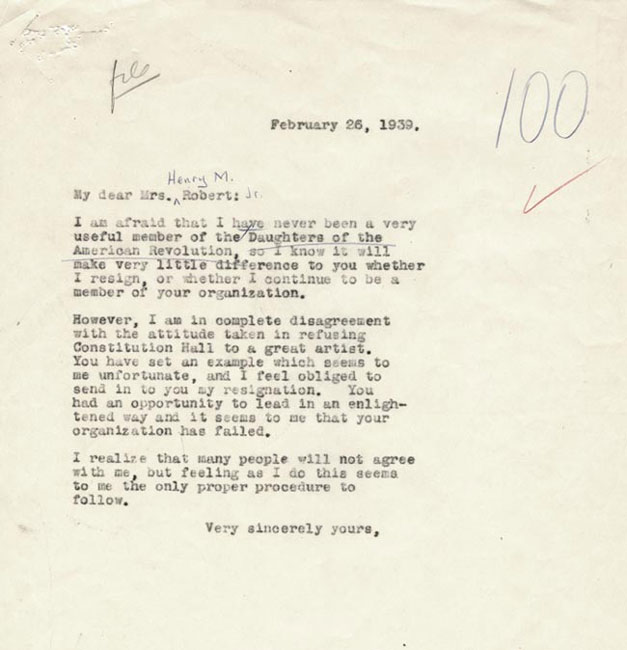 Eleanor Roosevelt's letter of resignation from the Daughters of the American Revolution. February 26, 1939.

In January 1939, the Daughters of the American revolution denied Howard University's petition to use Constitution Hall for a performance by Marian Anderson. On February 26, 1939, Mrs. Roosevelt submitted her letter of resignation to the DAR president, declaring that the DAR had an opportunity to lead in an enlightened way but had failed to do so. On April 9th, Marian Anderson performed at the Lincoln Memorial to an audience of seventy-five thousand people.

From Eleanor Roosevelt and Marian Anderson at the Franklin D. Roosevelt Presidential Library and Museum. 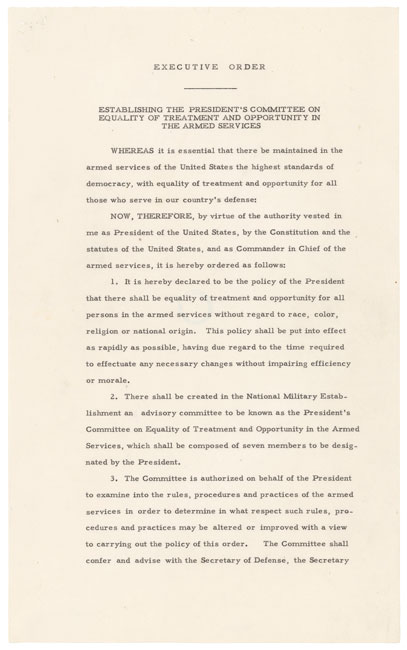 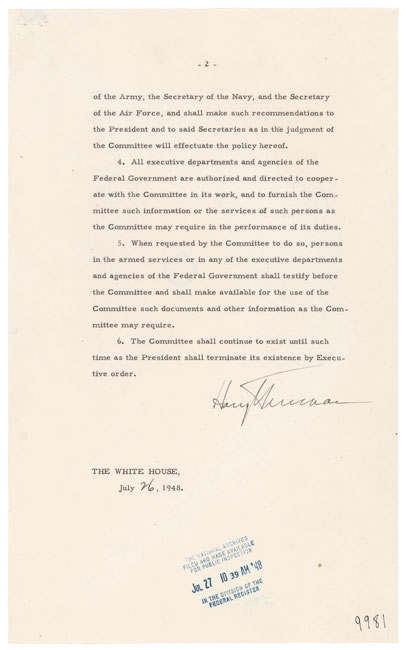 On July 26, 1948, President Harry S. Truman issued Executive Order 9981, an historic document that signaled the end of racial segregation and discrimination in the U.S. Armed Services. When progress was slow, President Truman told the military in January 1949 that he wanted "concrete results...,not publicity on it. I want the job done." On October 30, 1954, the armed services announced the integration of all of its branches.

From Desegregation of the Armed Forces at the Harry S. Truman Presidential Library and Museum. 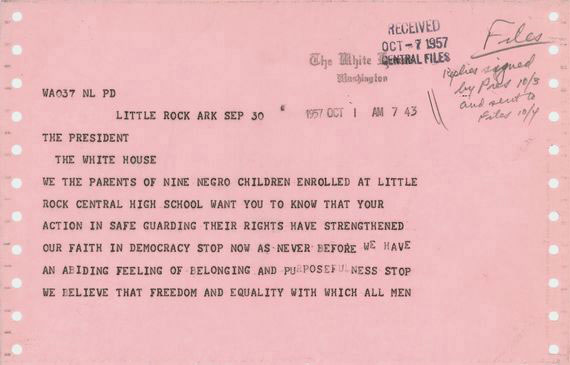 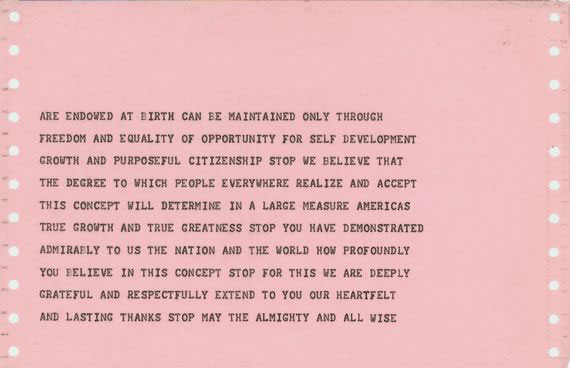 Telegram from the parents of the Little Rock Nine to President Eisenhower. October 1, 1957.

In September 1957, nine African American students enrolled at Central High School in Little Rock, Arkansas. When the governor ordered the Arkansas National Guard to surround Central High School to keep the students from entering the school, President Eisenhower ordered the 101st Airborne Division into Little Rock to uphold the rulings of Brown vs. the Topeka Board of Education, and to ensure the safety of the "Little Rock Nine." This telegram was sent by the parents of the students to President Eisenhower, thanking him for his actions.

From The Little Rock School Integration Crisis at the Eisenhower Presidential Library and Museum.

On June 11, 1963, President John F. Kennedy announced to the nation that he was sending a civil rights bill to Congress. The President told millions of Americans, "We are confronted primarily with a moral issue. It is as old as the scriptures and is as clear as the American Constitution. Next week," he promises, "I shall ask the Congress of the United States to act, to make a commitment it has not fully made in this century to the proposition that race has no place in American life or law."

From 1963: The Struggle for Civil Rights at the John F. Kennedy Presidential Library and Museum. 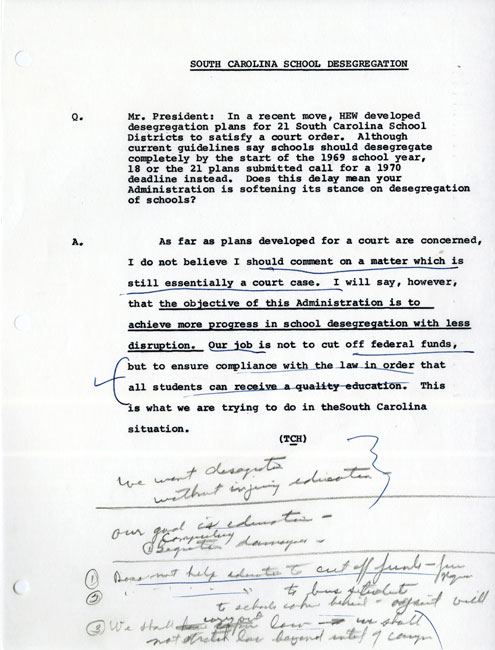 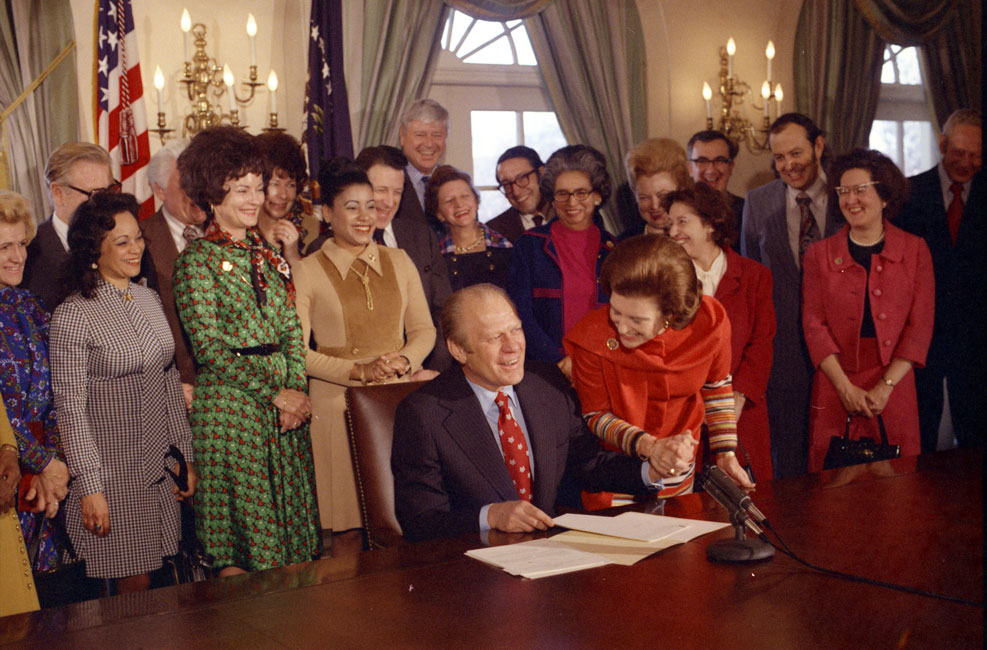 As First Lady, Betty Ford was an outspoken advocate of women's rights and aspirations. She encouraged the appointment of more women to senior government posts, supported the U.N. International Women's Year in 1975, and supported passage of the Equal Rights Amendment. 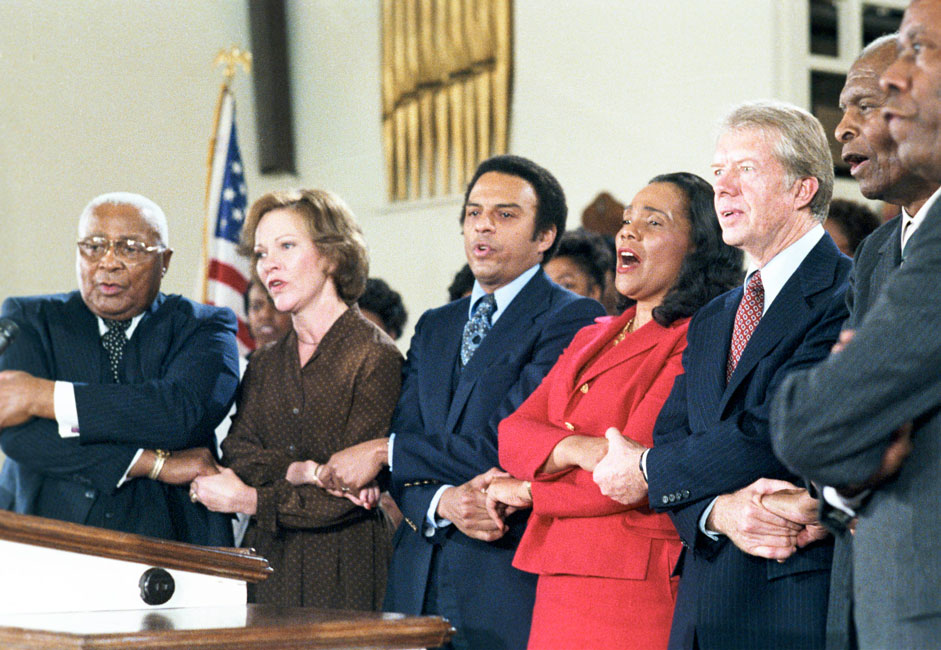 President Jimmy Carter was awarded the Martin Luther King, Jr. Nonviolent Peace Prize for a lifetime of civil rights activism. In his acceptance speech President Carter pledged to "strengthen and to enforce the civil rights laws of the land, firmly and without equivocation, not only the letter of the law but the spirit of the law as well." The ceremony was held at Ebenezer Baptist Church where Dr. King, Jr was both baptized and where he served as co-pastor until his death. 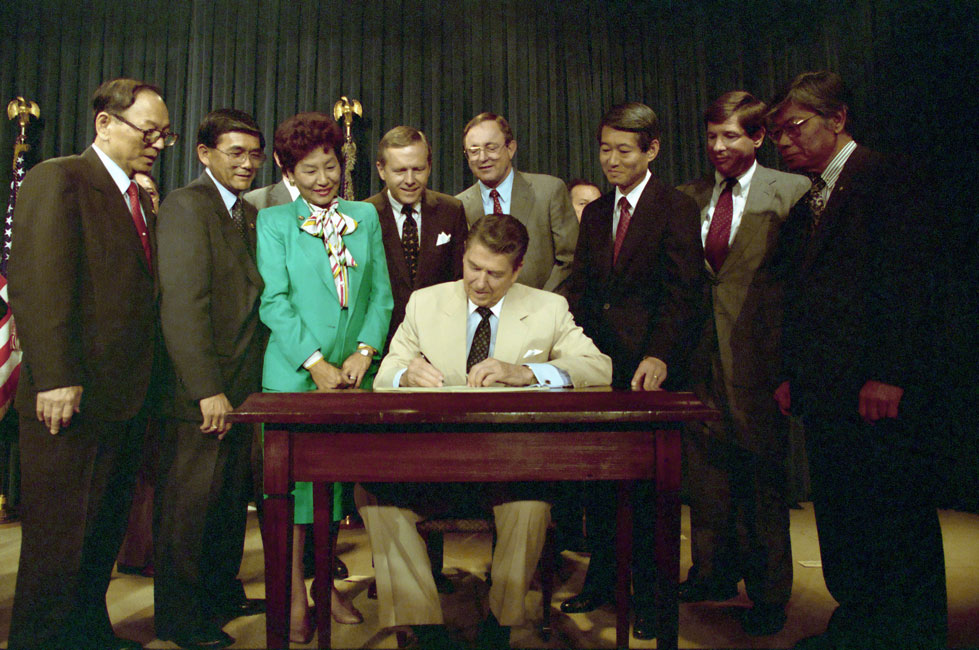 During World War II more than 110,000 Japanese-Americans (64% of whom were American-born citizens) were required to leave their homes and jobs and to live in 10 relocation camps. In 1988, President Ronald Reagan signed this Act that awarded apologies and restitution payments to Japanese-American survivors of World War II civilian internment camps.

From the Ronald Reagan Presidential Library and Museum. 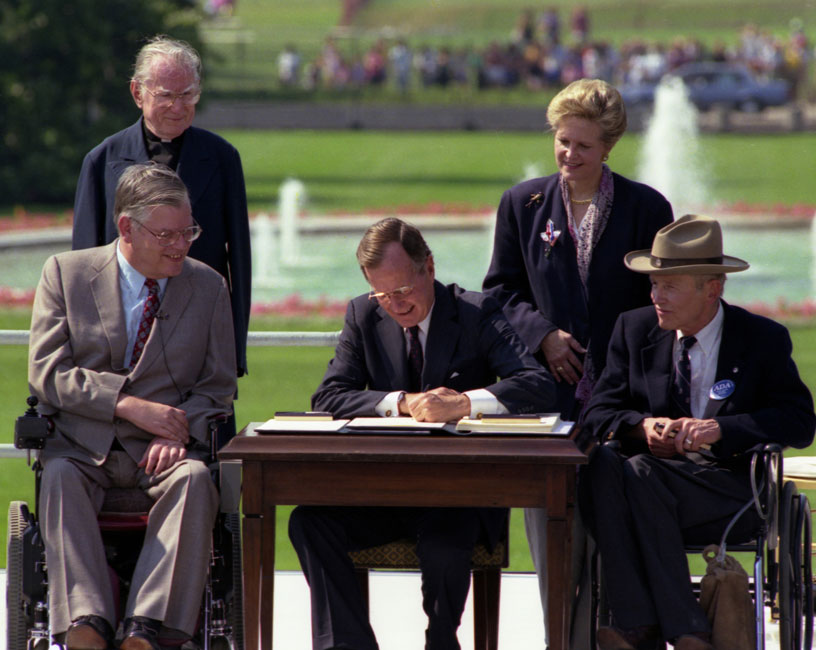 From the Americans with Disabilities Act at George Bush Presidential Library and Museum. National Archives Identifier 6037489 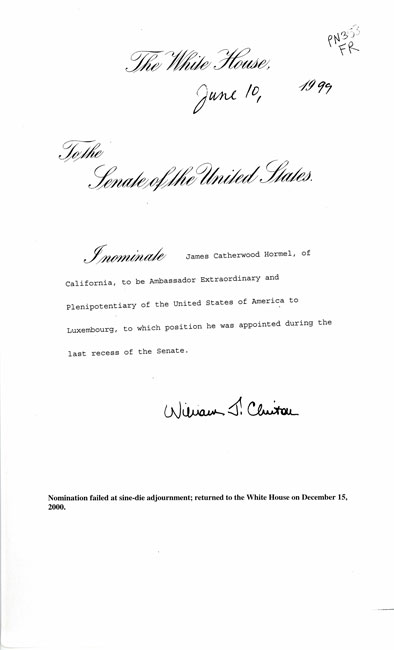 President William J. Clinton nominates James C. Hormel to be U.S. Ambassador to Luxembourg on October 6, 1997, and on January 6, 1999.

It was generally agreed that Mr. Hormel's nomination would have easily won a floor vote, however, a group of senators blocked the nomination. On June 4, 1999, President Clinton announced the recess appointment of James Hormel. This appointment made Mr. Hormel the first openly gay United States Ambassador.

From the Center for Legislative Archives. 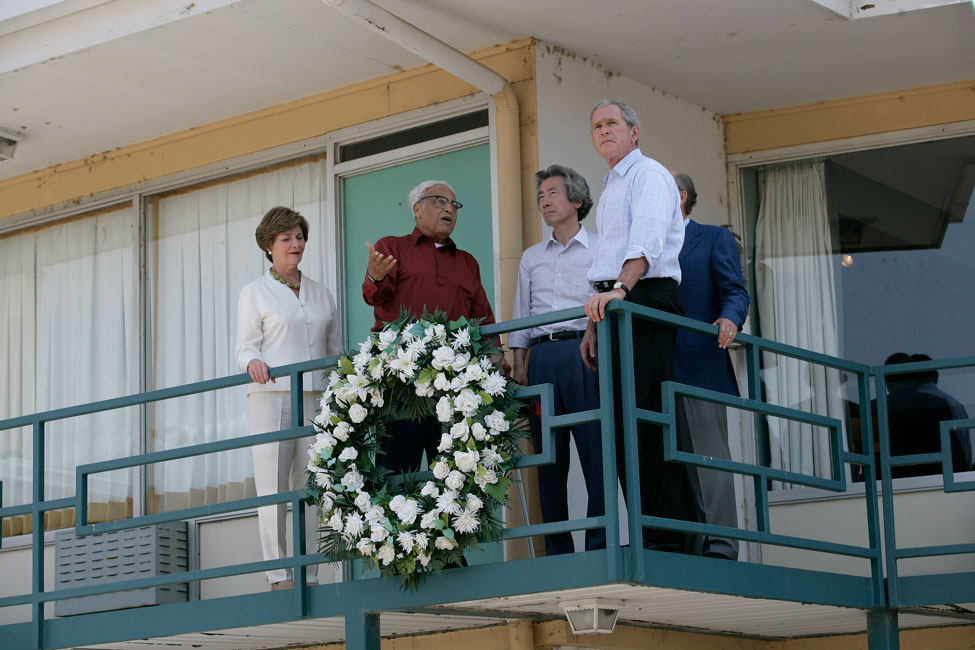 President George W. Bush, Mrs.Laura Bush and Japanese Prime Minister Junichiro Koizumi with Dr. Benjamin Hooks, former director of the NAACP as they tour the the Lorraine Motel. Memphis, Tennessee, June 30, 2006. The motel was the site of the 1968 assassination of civil rights leader Dr. Martin Luther King, Jr. It is now the National Civil Rights Museum.

From the George W. Bush Presidential Library and Museum.