When the National Archives in Washington, DC reopened its Rotunda on September 18, 2003, it unveiled not only the restored and re-encased Declaration of Independence, Constitution, and Bill of Rights, but the start of a whole new National Archives Experience for the education and inspiration of the American public. The National Archives, with the help of the Foundation for the National Archives, is creating a dramatic and powerful project to motivate people to care more deeply about democracy, learn about their individual stories, and make use of the patriotic spirit that lives on because of records.

NATIONAL ARCHIVES RAISES THE CURTAIN ON THE WILLIAM G. MCGOWAN THEATER ON SEPTEMBER 10, 2004

Will Serve as one of the Nation's Leading Centers for Documentary Film and a Forum for Programs Exploring American History, Democracy, and Government 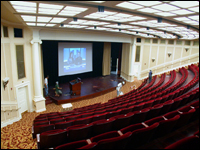 The path breaking initiatives, programs, and partnerships being launched during 2004 and 2005 at the William G. McGowan Theater include:

"The McGowan Theater allows us to bring the work of the nation's best documentarians, authors, and historians — and the unique holdings of the National Archives — to life through major public symposia, thought-provoking panel discussions and lectures, film screenings, family programs, and community activities," said John W. Carlin, Archivist of the United States. "These programs will enable the public to explore how the records of our past impact our present, our future, and our democracy as a whole. William G. McGowan's vision of the potential of communications technology to transform the way we learn lies at the heart of the National Archives Experience, and we are grateful for the support that has made this exceptional new public forum a reality."

The opening gala for the William G. McGowan Theater, (invitation only), on September 9, is organized by the Foundation for the National Archives and sponsored by MCI Communications Corporation, of which William G. McGowan was the founder. The event will feature the official ribbon-cutting for the Theater and will include:

Celebrating the gala will be luminaries from the fields of communications, broadcasting, and film, as well as Washington dignitaries.

FOUNDATION FOR THE NATIONAL ARCHIVES' RECORDS OF ACHIEVEMENT AWARD

The first recipient of the award will be David McCullough, who is being recognized for his award-winning career as a historian, author, and cultural figure. Mr. McCullough's nationally acclaimed works include John Adams, The Johnstown Flood, The Great Bridge, The Path between the Seas, Mornings on Horseback, Brave Companions, and Truman.

Throughout the research and writing of his award-winning books, Mr. McCullough has made extensive use of records held at the National Archives, its Presidential Libraries, and regional facilities. Mr. McCullough's expertise in revealing the story of history through original documents has exposed millions of readers to the power of primary sources as evidence of the actual people, places, and events that have shaped our country. Through all of his work, Mr. McCullough has helped make history a more appealing subject to the American public and has increased awareness for the vast treasures that the National Archives holds in trust for the nation.

Designed by noted architect Warren Cox, the 290 seat William G. McGowan Theater will feature the latest technology and equipment in a design that echoes the 1930s architecture of the National Archives' landmark building. The design combines the grandeur of a classic film theater of the period with the intimacy of a state-of-the-art screening room.

The Theater will be outfitted with pan, tilt, and zoom cameras, full studio recording capability for stage programs, dressing and rehearsal rooms, and set storage spaces. The unusual design and facilities allow live programming — including director interviews, panel discussions, theatrical
performances, and other events — to be integrated with dramatic and documentary footage or to be presented as stand-alone programs.

The 10 x 24-foot screen will have a motorized system that adjusts for different seating arrangements and media sizes. Advanced Audio/Visual equipment will make it possible to screen 16mm and 35mm film in all aspect ratios, as well as digital video and computer images. LAN Internet connections will enable presenters and performers to participate in events via the web. Multi-channel stereo/surround sound systems can support a variety of audio formats, including Dolby Surround and DTS.

The McGowan Theater will also be fully accessible, with an Assistive Listening system for the hearing-impaired and special wheelchair accessible spaces.

The William G. McGowan Theater is named in recognition of a generous leadership gift from the William G. McGowan Charitable Fund, Inc., in support of the National Archives Experience. William G. McGowan organized MCI Communications Corporation in 1968. From then until his death 24 years later, Mr. McGowan led that company and the entire telecommunications industry in the application of new technologies, the creation of innovative services, and the introduction of competition into what had previously been a closed monopolistic universe. His interests ranged well beyond the confines of commerce and industry, and reflected his belief that education was a unique means for instilling and fulfilling vision. The William G. McGowan Charitable Fund was established to give financial assistance to organizations and causes that reflect the visions, concerns, and lifetime experiences of its founder.

The National Archives is the world's largest depository of non-commercial film, with more than 300,000 reels of motion picture film and 200,000 sound and video recordings. In the McGowan Theater's state-of-the-art screening room, visitors will have the opportunity to view some of the unique items in this collection, from the earliest films of the Wright brothers demonstrating their aircraft, to the first footage of Model Ts rolling off the Ford assembly line. Newsreels, footage
from the United States Information Agency and the Defense Department, movies, kinescopes,
and videos in the collection of the National Archives represent the dynamic eras from the days of the Depression through the present. These film, sound, and video recordings have not only captured moments in our history, but shaped how we view ourselves and our nation.

THE NATIONAL ARCHIVES AND RECORDS ADMINISTRATION

The National Archives and Records Administration is an independent Federal agency that preserves and shares with the public records that trace the story of our nation, government, and the American people. From the Declaration of Independence to accounts of ordinary Americans, the holdings of the National Archives directly touch the lives of millions of people. The National Archives is a public trust upon which our democracy depends, ensuring access to essential evidence that protects the rights of American citizens, documents the actions of the government, and reveals the evolving national experience.

THE FOUNDATION FOR THE NATIONAL ARCHIVES

Washington, DC. . . On Friday, September 10, 2004, the National Archives in partnership with the PBS science series NOVA will unveil a new film, "Preserving the Charters of Freedom." For the first time, the public will glimpse the behind-the-scenes excitement and drama of the preservation and re-encasement of the Charters of Freedom — The Declaration of Independence, The U.S. Constitution and The Bill of Rights.

This free18-minute film produced by Middlemarch Films for NOVA/WGBH (Boston) and PBS will be shown in the new William G. McGowan Theater which will also open to the public on September 10. The McGowan Theater is located in the National Archives Building, Constitution Avenue, between 7th and 9th Streets, NW. The film will be shown every 30-minutes during public hours. Fall/Winter hours are 10 A.M. - 5 P.M., daily. (Occasional special day-time programs may pre-empt the showing of the film. The public may call 202-501-5000 for exact listings.)

"Preserving the Charters of Freedom" tells the story of the re-encasement and the building of new display cases for these great Charters — the three 18th century documents which are the basis of the creation and government of the United States. They are the most precious original documents in the country, arguably in the world.

What at first seems to be a straight-forward operation, protecting a few pieces of parchment from damage, turns out to be an amazingly complex endeavor involving a large number of people from a variety of disciplines. The conflicting demands of the conservators, used to working with parchment and ancient inks, scientists working with computers and space-age materials, and curators concerned with making these documents accessible to a large public, provides the drama for much of this film. The decisions they reach is a consensus based on knowledge of both the chemistry and physics of preservation and an understanding of a craft as old as civilization itself.

As the scientists struggle with infra-red spectroscopy, argon gas and titanium encasements to freeze the physical documents in time, in the end it is the power of these Charters of Freedom — the words and ideas — which will withstand the test of time.

In announcing the unveiling of the new film, Archivist of the United States John W. Carlin said, "For the first time we will be able to share with the public the exciting story of how the Charters of Freedom were preserved and re-encased for public display. We are grateful to Middlemarch Films, NOVA, and PBS for their generosity in making this a reality."

"We are extremely pleased to have had the opportunity to work with the National Archives and Middlemarch Films to make this documentary and have it be the first film shown in the new William G. McGowan Theater," said Paula S. Apsell, senior executive producer, NOVA. "NOVA and PBS' goals are to invite its viewers on a journey of discovery and storytelling. I can think of no better story to tell than the preservation of the 'Charters of Freedom'."

"Preserving the Charters of Freedom" which will be shown in the McGowan Theater through February 15, 2005, is based on an hour-long NOVA documentary which is scheduled to air on PBS in February 2005.

"Preserving the Charters of Freedom" has been made possible through the generosity of the following contributors: WGBH Boston, the Park Foundation, Sprint, Microsoft, Middlemarch Films and PBS.