See History As It Happened 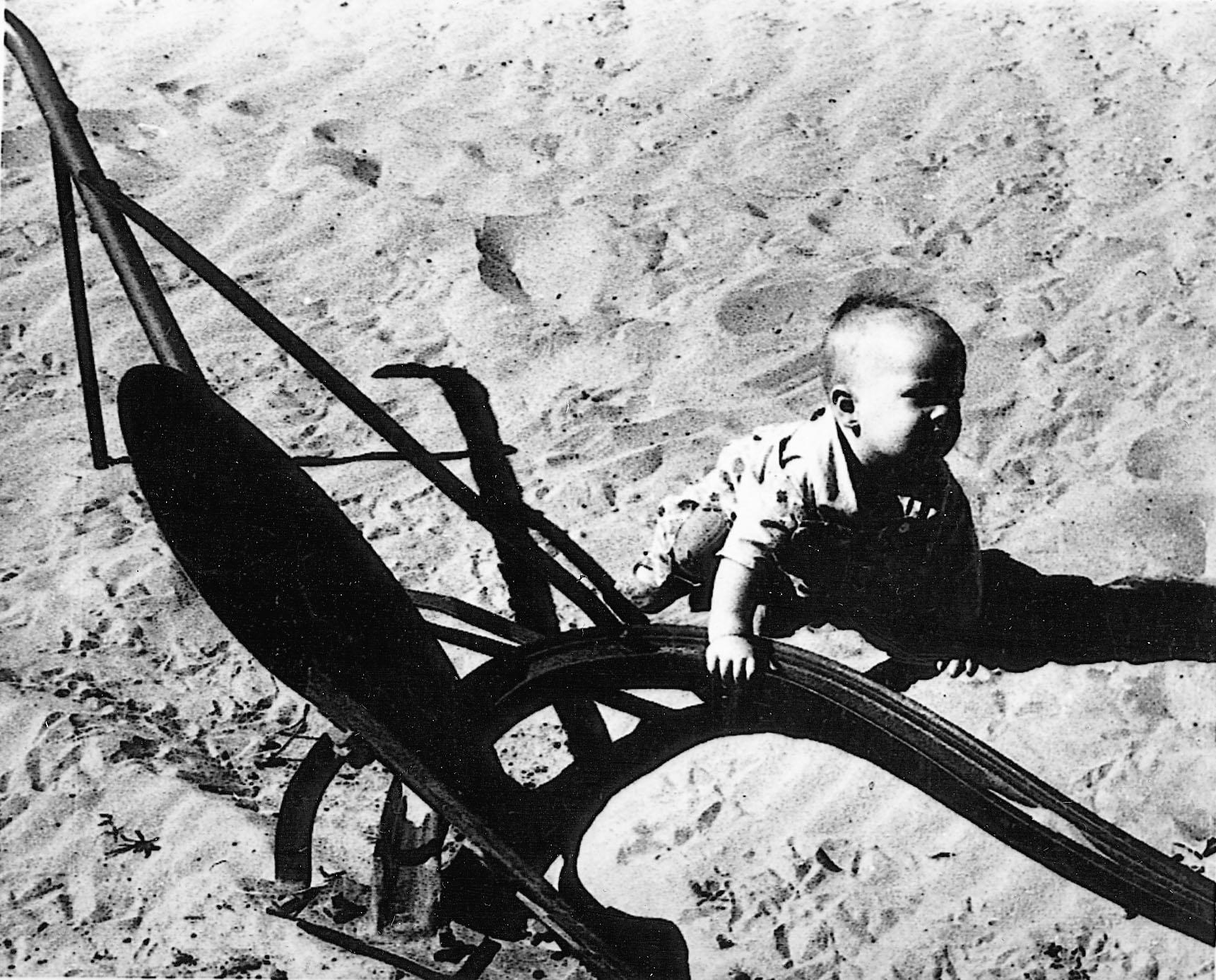 Pare Lorentz made his classic film about the Dust Bowl of the 1930s, The Plow That Broke the Plains, for the Farm Security Administration in 1936. (96-LF-1-1)

American soldiers hit Omaha Beach on June 6, 1944, as one of the greatest military undertakings in history begins. A dust storm turns day into night in the 1936 documentary The Plow That Broke the Plains. Man takes his first steps on the moon on July 20, 1969. And a young President is gunned down on a sunny day in Dallas in 1963.

These images on film are riveting, to be sure, but they are also records of the United States Government—created as history happened and now preserved at the National Archives and Records Administration (NARA) as part of the one of the world's largest audiovisual archives, a trove that includes 360,000 reels of film that have long been mined for both documentary and feature films.

These films capture major events of the twentieth century as witnessed by those who lived through them: farmers and assembly line workers, artists and entertainers, scientists and inventors, astronauts and explorers, Presidents and statesmen, soldiers and sailors. These images, such as the ones from D-day, are often the raw footage on which familiar Hollywood images are based.

"These two new outlets for the National Archives' magnificent audiovisual holdings are really complementary," said Marvin Pinkert, director of museum programs for NARA. "In the McGowan Theater, films will create an emotional tie between visitors and records, but in the Public Vaults, this same resource provides some of the most dramatic moments of discovery."

The first of the two openings this fall is the new McGowan Theater, which will expand access to the film holdings of the National Archives.

Among the McGowan Theater's missions will be that of an outlet not only for the many documentary films in NARA's holdings but also for the work of filmmakers who have drawn on material from NARA holdings. A signature film on the importance of records in a democracy will be the first stop for visitors to the National Archives Experience. 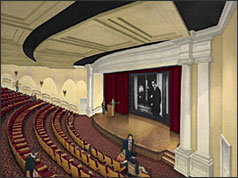 The McGowan Theater was designed by architect Warren Cox to complement the 1930s look of the National Archives Building. As the theater was conceptualized, NARA received advice from Charles Guggenheim, the Oscar-winning documentary filmmaker who was president of the Foundation at the time of his death in 2002, regarding projection equipment and the movable screen that is a feature of the theater.

The theater is located under the building's Constitution Avenue steps. It provides unobstructed sightlines, seating for 290, a state-of-the-art sound system, and technology capable of hosting live broadcasts as well and showing silent movies.

The color scheme of gold, beige tones, and burgundy recalls the grandeur of classic movie theaters. The period look is enhanced by original 1930s wall sconces designed by John Russell Pope, the architect of the building, which were relocated from elsewhere in the building.

The theater will have a number of uses besides showing films. It will be the home for lectures, debates, and forums on public policy issues; programs featuring authors of books based in whole or part on research at NARA; and a variety of family events. Through a new center for documentary film, NARA hopes to educate as well as entertain audiences.

While the McGowan Theater will be a forum for large audiences, another venue for the National Archives' film collection will be the Public Vaults, which will allow individuals to explore NARA's film holdings.

One of the exhibits in the Public Vaults will focus on archival films of D-day. Few events in history have as strong an emotional tug on Americans as D-day, and the real-time depiction of the incredible events of June 6, 1944, recorded by cameramen on the scene, is the raw material for a new exhibit unit called "The Reel D-Day." Visitors are asked to stand in the shoes of the documentary creator, just as in other parts of the Public Vaults they may try on the role of an archivist, a genealogist, or a member of Congress.

"The Reel D-Day" interactive unit is set up as a film-editing studio. On the desks and the walls are examples of items from NARA's holdings that a real filmmaker would find useful in creating a film about D-day. Still photographs show various scenes on D-day. A panoramic map of the beach gives the viewer an idea of the scope of the invasion. A drawing of clothing worn by soldiers can help the filmmaker accurately recreate the uniforms. Excerpts from after-action reports tell what it was really like to hit the beaches under German fire.

"The Reel D-Day" offers six categories of actual footage about D-day: "Preparing to Invade," "Crossing the Channel," "Assault," "Bombardment," "Reinforcements," and "Aftermath." The films come mainly from records of the U.S. Army Signal Corps and the Department of the Navy.

Through "Reel D-day," the visitor takes on an interactive role:

You are now the filmmaker, and you decide what scenes go in your movie. The movie maker screen will show you a set of empty movie cells and the six categories. As you select a category, you can read about the scene to help you choose which clip best communicates the story you want to tell. To create your ninety-second documentary, drag and drop footage segments onto the empty movie cells.

Once you have selected and placed all the footage, you can watch the movie you have just made. Preformatted text will appear between the scenes, like the title cards that appear in silent movies. If you want to make changes, you can then re-edit your documentary, rearranging or choosing different scenes. When you are satisfied with the final product, you can post it for playback on the overhead screen.

In addition to "The Reel D-Day," other components of the Public Vaults will draw on material from NARA's film holdings to take visitors "inside" the National Archives for up-close looks at some of our many records.

Along the Record of America hall, footage from the Ford Film Collection will show various manufacturing processes of the early twentieth century. In a Public Vault called "Investigations," visitors can see clips of events in U.S. history that were the subject of later investigations: the explosion of the space shuttle Challenger, the Kennedy assassination, the Kent State shootings, UFOs, women working on assembly lines in World War II, and the Watergate affair.

Exhibit units about Presidents will include material from the presidential libraries. A unit called "I Want You" will feature armed forces recruitment and induction materials. And an excerpt from the film Moonwalk One will show man's first steps on the moon in "20 July 1969." 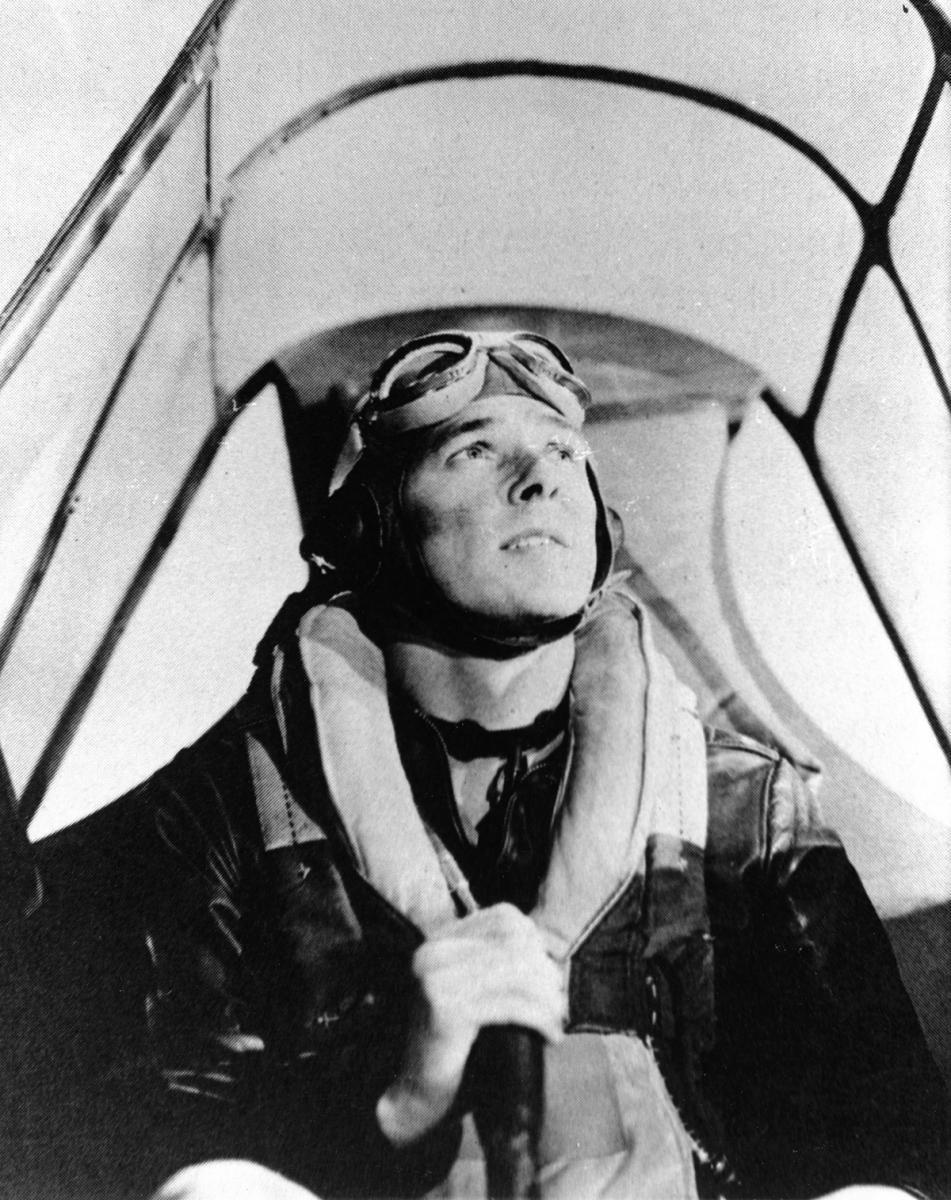 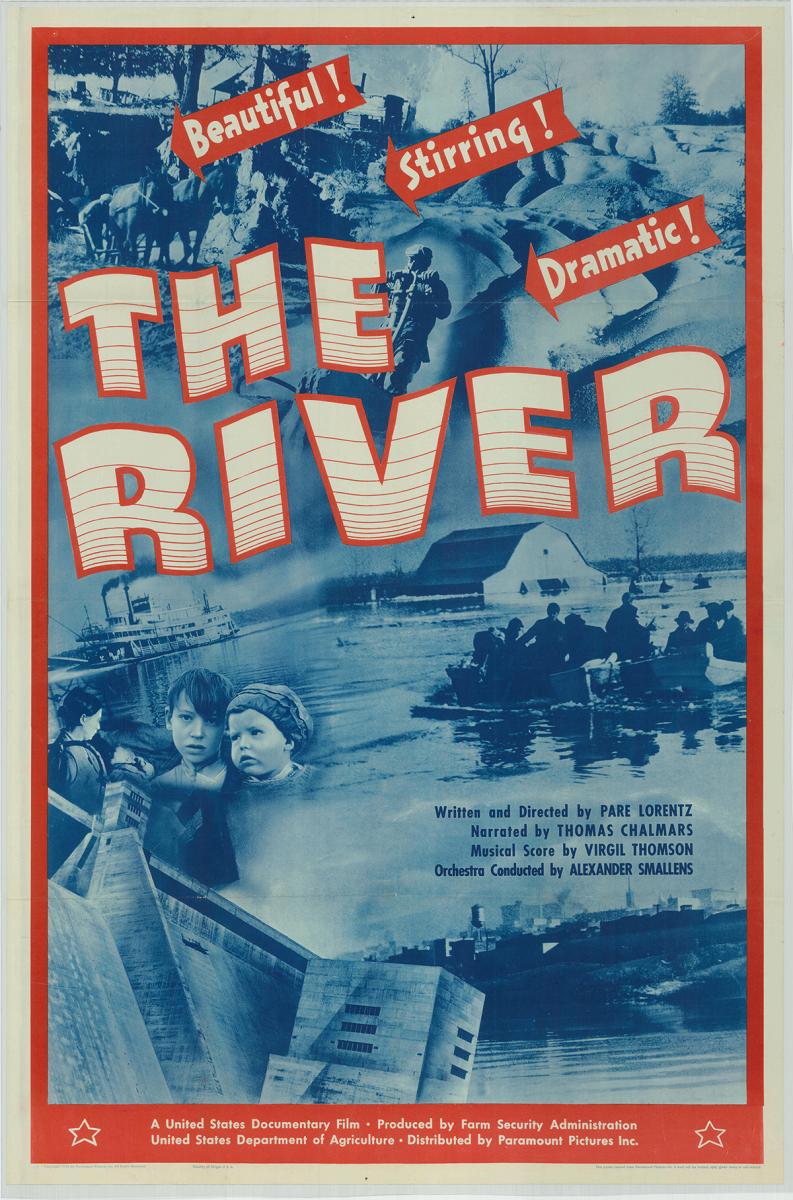 A poster advertises The River, a Pare Lorentz film for the Farm Security Administration about the Mississippi River and its exploitation from the Civil War through the 1930s. (96.1)

"Reel D-Day" and other components of the Public Vaults demonstrate how the story of America can be told through motion picture footage recorded on site as the historical events unfolded.

Those images are part of the extensive holdings of audiovisual materials that are preserved and made accessible at the National Archives—and used widely for movies and television documentaries.

Those holdings include more than 360,000 reels of film, 275,000 sound recordings, and 110,000 videotapes. Among them are large collections of newsreels, donated film collections, government-produced documentaries, and edited and unedited film from government and private sources as well as captured enemy film from World War II and the Korean and Vietnam wars.

Included are collections from U.S. Government agencies, such as both black-and-white and color war footage from the Army Signal Corps, the Navy Department, the U.S. Air Force, the U.S. Marine Corps, and the Office of War Information. Other agencies, including the National Aeronautics and Space Administration and the Agriculture Department, have sent their audiovisual holdings to NARA.

The holdings also include films made by familiar names and those would become famous later. Government films made during World War II to acquaint Americans with their own forces as well as the enemy involved such names as directors Frank Capra, John Ford, William Wyler, Garson Kanin, and John Huston. Theodore Geisel, who later rose to fame under the pen name Dr. Seuss, was also a writer and film unit supervisor for the army. Ronald Reagan was featured in army training films such as Jap Zero and The Rear Gunner, as were many other actors who were at the time and later involved with major Hollywood movies.

Within the holdings are some truly unique films and film collections.

The Ford Film Collection shows how the automobile helped create an ever-mobile America. Special government documentaries done in the 1930s, The River and The Plow That Broke the Plains, by Pare Lorentz, capture the struggles of the Great Depression in the Dust Bowl. And Abraham Zapruder's famous 8mm amateur home movie records the assassination of President John F. Kennedy in Dallas in 1963 and is now an official government record.

NARA's audiovisual collections also hold some unusual entries. Carmencita, Spanish Dance, is a one-minute film made by Thomas Edison in 1894. Laurel and Hardy appeared in Tree in a Test Tube, their only color film, for the Forest Service in 1942. Der Fuehrer's Face, which won an Oscar for Walt Disney, gave Donald Duck a look at Hitler. Some Bonds I Have Known, featuring Charles Chaplin, was a World War I film extolling the bonds of friendship, love, marriage—and victory.

Also among the audiovisual holdings at NARA are donated collections of newsreels and television and radio newscasts. They include Universal Newsreels from 1929 to 1967, Paramount Newsreels from 1941 to 1957, and Fox-Movietone News from 1957 to 1963. A collection of ABC Radio News dates from 1943 to 1972. NARA also receives C-SPAN's tapes of the proceedings of Congress and tapes of CBS Evening News programs and CBS coverage of special news events.

For years, NARA's rich audiovisual resources have been researched for movies and documentaries, and such celebrities as Bob Hope and Gregory Peck have come to NARA to view them. Documentary filmmakers Charles Guggenheim and Ken Burns have drawn from the collections for their award-winning films and television series. Guggenheim's films about Presidents Truman, Kennedy, and Johnson and his Nine from Little Rock drew on NARA holdings, as did Burns's Baseball and Jazz.

Each year, thousands of researchers screen NARA holdings for documentary productions on cable television, such as the History Channel, the A&E network, TLC, and the Discovery Channel—as well as for programming on the Public Broadcasting Service.

The holdings of the National Archives are of many forms. From the parchment of the nation's founding documents—the Declaration of Independence, the Constitution, and the Bill of Rights—to the increasing number of electronic documents created by a digital government, records take on a variety of forms.

The film holdings are records, too, and they let Americans see a recreation of events like no other kind of record can, providing the sights and sounds of the American story and strengthening for the citizen the tie between our democracy and its records.

Now this priceless collection of images and sounds, without equal in importance and impact, will have some exciting new outlets as part of the National Archives Experience.