The Constitution of the United States: Document of the People

"We the People of the United States, in Order to form a more perfect Union, establish Justice, insure domestic Tranquility, provide for the common defense, promote the general Welfare, and secure the Blessings of Liberty to ourselves and our Posterity, do ordain and establish this Constitution for the United States of America." 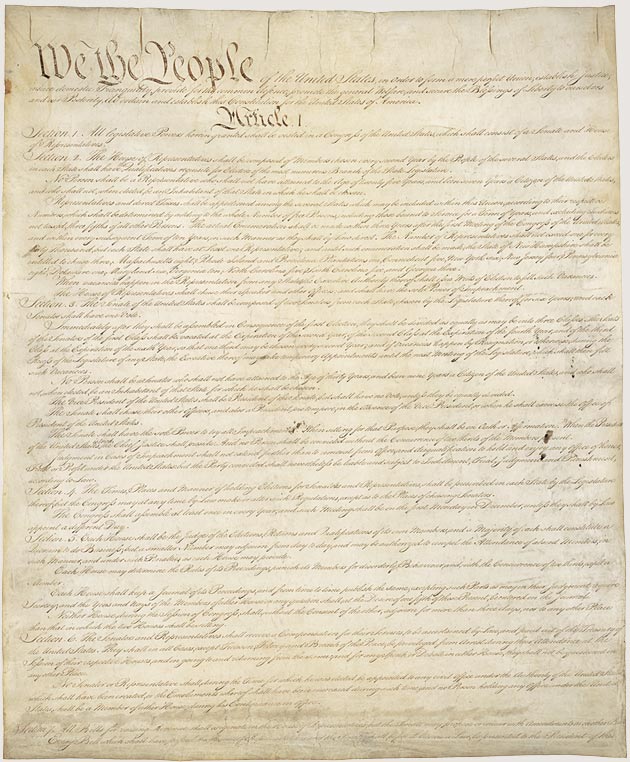 These famous words, penned in 1787, laid the foundation for the Government of the United States of America, setting our fledging democracy on its way to becoming the great nation we live in today. September 17 of this year marks the 215th anniversary of the signing of the Constitution. Thus, I believe it is fitting that we reflect on this document that continues to define our country as it grows and changes.

Convening in May in Philadelphia, with the original intent to revise the Articles of Confederation, the Constitutional Convention debated throughout the hot summer months. By June it was decided that rather than amend the Articles, the delegates would draft an entirely new framework of government. While we have a fairly complete record of the proceedings of the convention now, thanks to James Madison's detailed notes, sessions were held in secret with no reporters or visitors permitted. Among the major points at issue were how much power to allow the central government, how many representatives in Congress each state should have, and whether those representatives should be elected directly by the people or by the state legislators.

Debate over the Constitution sometimes turned bitter, but in the end the delegates were able to reach consensus, and the Constitution still stands as a model of cooperative statesmanship and the art of compromise.

However, the story of the Constitution wasn't completed in 1787 with its writing or even with its adoption. The story continues today, as Americans seek to mold their government to fit the evolving needs of the country. For example, the Constitution as originally written mentions little about the right to vote. At the time it was thought that only a privileged few (meaning white men who owned property) should be allowed to vote. The fight to enfranchise Americans regardless of race or gender is illustrated in the fact that today, seven of the Constitution's 27 amendments deal with the right to vote.

Over the past 215 years, literally thousands of amendments to the Constitution have been proposed to Congress, yet only 27 have been ratified. The holdings of the National Archives include an 1878 proposal to abolish the Senate, a call for a national vote before the country could go to war, and an amendment that would limit the wealth of an individual to $1,000. As you can see, while the framers of the Constitution meant for it to be adaptable, this change doesn't (and shouldn't) come easily.

The Constitution has always been a document that belongs to the people.

Every day, throughout the nation, American citizens swear an oath to protect and defend the ideals embraced and enhanced by each generation of their countrymen. Immigrants who seek to become naturalized citizens, the men and women of the armed forces, public officials, federal employees, and countless others pledge to uphold this living document that lays out the role of government within a democracy. And every day, Americans ensure the continuation of our democracy by practicing the rights guaranteed to them under the Constitution.

This is continuing tribute not only to our forefathers who so passionately debated each article and draft of this great document but also to citizens who fought to make the Constitution, and subsequently the government, reflective of the needs of the people.

As I write this, the pages of the Constitution are undergoing some necessary conservation work so that future generations will be able to see them. When this work is completed, all four pages of the document will be sealed in new, state-of-the-art encasements designed to protect them in the best way possible. Then on Constitution Day 2003, the Constitution, along with the Declaration of Independence and the Bill of Rights, which are also now undergoing conservation work, will be returned to permanent display in the newly renovated Rotunda of the National Archives Building in Washington D.C.

The return of these Charters of Freedom to public view will usher in a new chapter in the history of the National Archives. These documents, in their new, more accessible exhibit, will form the foundation of the National Archives Experience, a collection of new, interactive experiences that will let visitors discover for themselves the role that records play in the history of our country and the lives of our citizens.

Until you can come see the Constitution again, I invite you to visit us online at www.archives.gov and read for yourself the words that gave shape to our democracy. And I ask you to remember, on Constitution Day and every day, that this great document belongs to each of us, and it is our responsibility to keep alive its ideals and the intentions and aspirations the Americans who came before us had for our country. For it is only by doing this that we can "secure the blessings of liberty" for our children and their children.