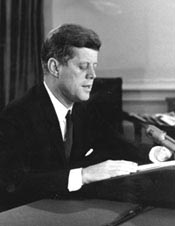 In a televised address on October 22, 1962, President Kennedy informed the American people of the presence of missile sites in Cuba. (NARA, John F. Kennedy Library)

But Sunday morning, October 14, was cloudless, and the U-2 flight got some good photos—pictures that, over the next few days, were analyzed and reanalyzed. They provided positive proof of what the United States had for months suspected: that the Soviet Union was installing medium-range nuclear weapons in Castro's Cuba, capable of striking major U.S. cities and killing tens of millions of Americans within minutes.

Faced with this dramatic documentation, President John F. Kennedy immediately decided that the missiles would have to be removed and called his most trusted advisers together to serve as an Executive Committee of the National Security Council, or ExComm. Its job was to develop possible responses to the buildup of missiles and the consequences the buildup represented.

Forty years later, what is now known as the "Cuban Missile Crisis," which lasted for several weeks, is remembered as the hottest moment in the Cold War between East and West and a defining moment in Kennedy's presidency.

U.S. forces around the world were placed on alert. Four tactical air squadrons were readied for air strikes over Cuba, with missile sites, airfields, ports, and gun emplacements as their potential targets. More than 100,000 troops were sent to Florida for a possible invasion of Cuba. The navy dispatched 180 vessels into the Caribbean for a planned amphibious exercise involving 40,000 marines. B-52s loaded with nuclear weapons were in the air at all times.

With the October 14 photographs, the United States had caught the Soviet Union building offensive nuclear missile bases in its backyard, and the two superpowers were now joined in the first direct nuclear confrontation in history.

Throughout 1962, the movement of Soviet personnel and equipment to Cuba had aroused suspicions in the American intelligence community. In response, U.S. ships and planes began photographing every Cuba-bound Soviet vessel, and U-2 spy planes began regular reconnaissance flights over the island.

The first evidence of the arrival in Cuba of surface-to-air missiles, missile-equipped torpedo boats for coastal defense, and large numbers of Soviet military personnel came in photographs taken in late August. But these pictures provided no evidence of offensive ballistic missiles. In September, Kennedy delivered two explicit warnings to Soviet Premier Nikita Khrushchev regarding the buildup of what were being called "defensive" Soviet arms in Cuba.

On September 13, Kennedy wrote: "If at any time the Communist build-up in Cuba were to endanger or interfere with our security in any way . . . or if Cuba should ever . . . become an offensive military base of significant capacity for the Soviet Union, then this country will do whatever must be done to protect its own security and that of its allies."

Despite Kennedy's warnings, the Soviets continued to construct the bases, and the United States continued to monitor their activities and take pictures. The October 14 photographs, however, changed the nature of the game and set in motion a series of extraordinary events.

The ExComm was to consider how to respond to the Soviet actions. Members discussed a number of possible responses: do nothing; take the issue to the United Nations and the Organization of American States; offer to remove U.S. missiles in Turkey if the Soviets removed the missiles in Cuba; send secret envoys to negotiate with Castro; blockade Cuba; strike Cuba by air; or invade Cuba. 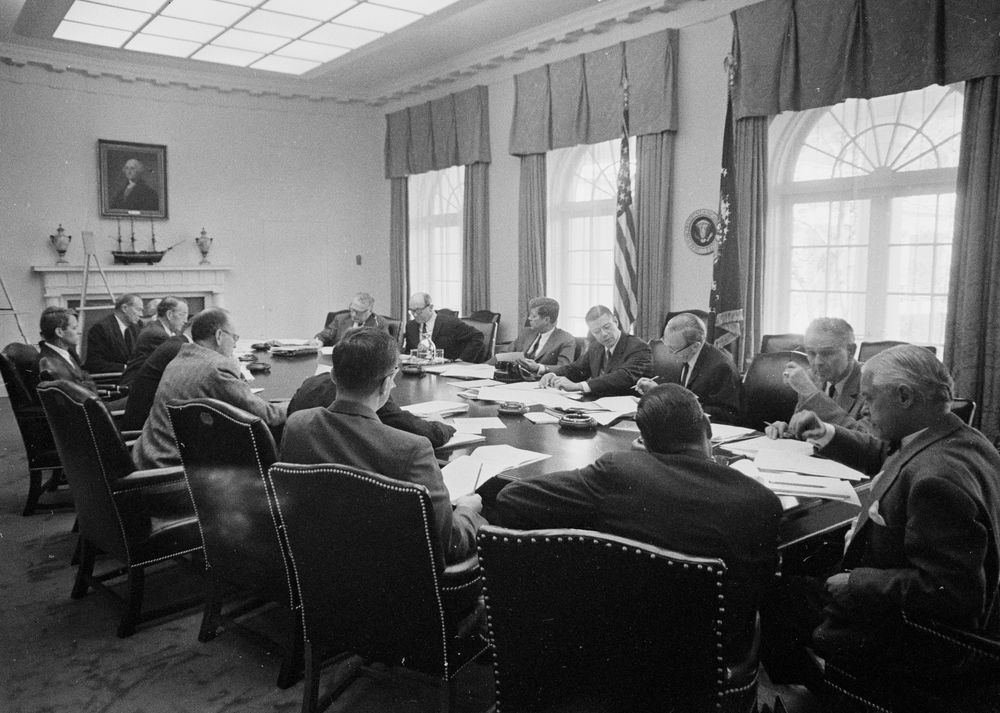 As the ExComm discussions proceeded, the idea of a naval blockade emerged as the response of choice.

Meanwhile, Kennedy met on October 18 for several hours with Soviet Foreign Minister Andrei Gromyko, who stressed that the Soviet Union's weapons in Cuba were "by no means offensive." Kennedy read Gromyko his previous statement that warned against offensive missiles in Cuba.

Later that day, preparations for the naval blockade began, but the Joint Chiefs of Staff continued to push for an air strike and invasion. The President, wanting to appear to be conducting normal business, flew to the Midwest for campaign appearances in connection with the upcoming congressional elections. He returned Saturday, October 20, to read the draft of a speech announcing the blockade. Although the blockade, which Kennedy preferred to call a "quarantine," represented only "limited action" against Cuba and the Soviets, Kennedy felt that "limited action" was the best way to start; he could always opt for broader action, such as an invasion or air strikes, if the blockade did not work.

While the ExComm met officially as the National Security Council, Kennedy decided that in his speech, the United States should not be on the diplomatic defensive but should instead indict the Soviets for duplicity and for threatening world peace. He wanted to speak on Sunday evening but was persuaded to delay the address until Monday, so the State Department could brief leaders of allied countries and congressional leaders could be informed.

On Monday evening, October 22, Kennedy addressed the nation. He was clear and direct:

To halt this offensive buildup, a strict quarantine on all offensive military equipment under shipment to Cuba is being initiated. All ships of any kind bound for Cuba, from whatever nation or port, will, if found to contain cargoes of offensive weapons, be turned back. . . .

It shall be the policy of this nation to regard any nuclear missile launched from Cuba against any nation in the Western Hemisphere as an attack by the Soviet Union on the United States requiring a full retaliatory response upon the Soviet Union. . . .

I call upon Chairman Khrushchev to halt and eliminate this clandestine, reckless and provocative threat to world peace and to stable relations between our two nations. . . . He has an opportunity now to move the world back from the abyss of destruction. . . .

My fellow citizens: let no one doubt that this is a difficult and dangerous effort on which we have set out. No one can foresee precisely what course it will take or what costs or casualties will be incurred. Many months of sacrifice and self-discipline lie ahead—months in which both our will and our patience will be tested—months in which many threats and denunciations will keep us aware of our danger. But the greatest danger of all would be to do nothing.

Tensions mounted over the next few days as the world wondered if there could be a peaceful resolution to the crisis. Kennedy's speech drew wide support in Latin America and among U.S. allies. But the Pentagon continued plans for air strikes and a land invasion. Several Soviet vessels turned back from the quarantine line, and the United States presented in the United Nations photographic proof of the missiles during a televised confrontation with the Soviet Union. But construction of the missile launch sites in Cuba continued.

On October 26, Kennedy received a letter from Khrushchev suggesting that "if assurances were given that the President of the United States would not participate in an attack on Cuba and the blockade lifted, then the question of the removal or destruction of the missile sites in Cuba would then be an entirely different question." The same day, a Washington journalist received a clarification of Khrushchev's proposal from an important official at the Soviet embassy in Washington: The Soviets would remove the missiles under United Nations supervision and inspection, and the United States would lift the blockade and pledge not to invade Cuba.

Kennedy got another letter from Khrushchev, demanding removal of U.S. missiles in Turkey, the Soviet Union's neighbor, in exchange for removal of Soviet missiles in Cuba. The implicit message was if the United States invaded Cuba, the Soviets would invade Turkey, and the conflict could escalate. Kennedy decided to ignore this letter and respond to the first one. On Sunday, October 28, the Soviets agreed to remove the missiles from Cuba.

Negotiations for final settlement of the crisis continued for several days, but the immediate threat of nuclear war had been averted.

On November 20, Kennedy announced, "I have today been informed by Chairman Khrushchev that all of the IL-28 bombers in Cuba will be withdrawn in thirty days. . . . I have this afternoon instructed the Secretary of Defense to lift our naval quarantine." Subsequently, the United States dismantled several of its obsolete air and missile bases in Turkey.

The Cuban missile crisis was perhaps the greatest test of John F. Kennedy's presidency, and while he and Khrushchev were able to achieve a peaceful resolution, the crisis had a number of far-reaching historical consequences. Within a year, Kennedy and Khrushchev signed the Nuclear Test Ban Treaty, the first disarmament agreement of the nuclear age. Also in 1963, the first "hotline" between Washington and Moscow was installed.

This article was adapted from The Cuban Missile Crisis: President Kennedy's Address to the Nation, published by NARA in 1988 as part of its "Milestone Documents in the National Archives" series.