"Your letter received this morning brings me great joy." 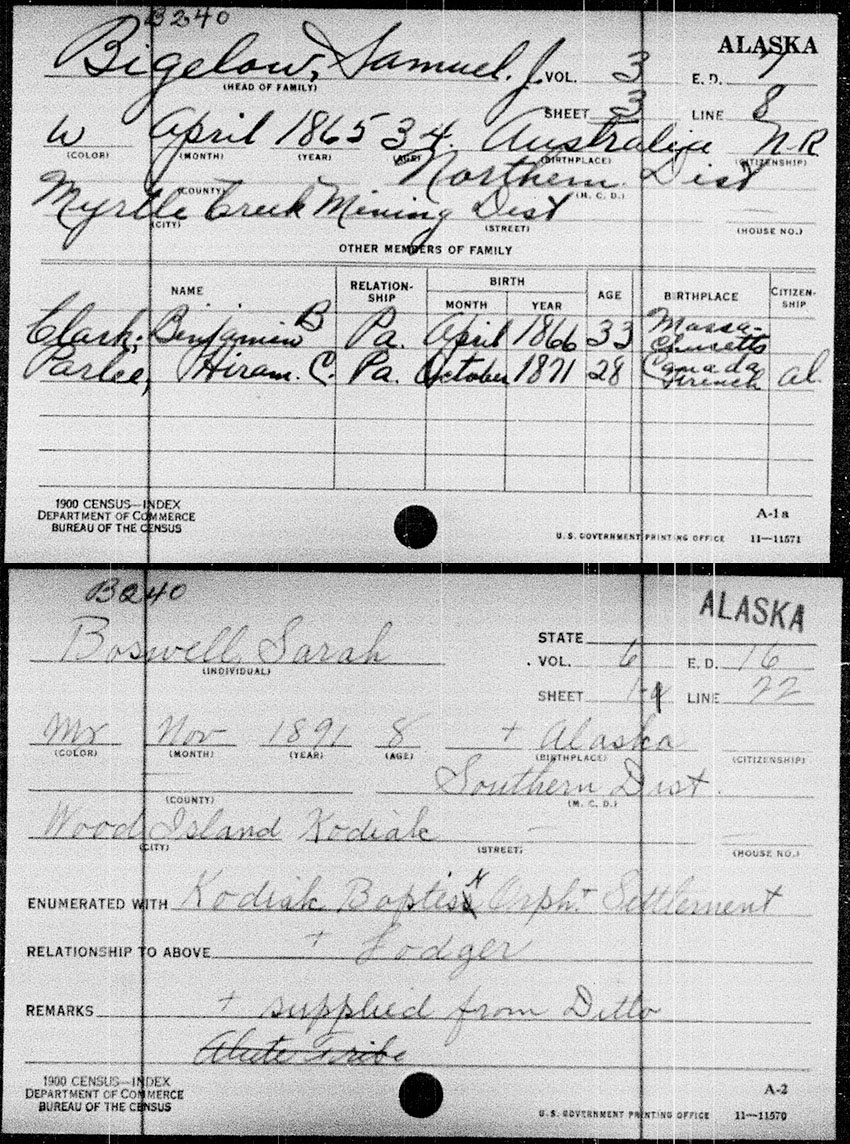 Sample Soundex cards from the 1900 census. (Records of the Bureau of the Census, RG 29)

Genealogists are familiar with the Soundex indexing system as a useful tool for finding people in the 1880–1920 censuses and in twentieth-century immigration records. When the 1930 census opens on April 1, 2002, however, researchers will be disappointed that there is a Soundex for only twelve states. The existence of these indexes is an accident of history. The indexing projects were done to put unemployed people to work during the Great Depression of the 1930s and because the Bureau of the Census needed indexes for its own needs. The projects ended as manpower was diverted to increased military and industrial needs for World War II.

During the Great Depression, New Deal agencies sought to put people back to work. The Works Progress Administration (established in 1935 and renamed Work Projects Administration in 1939) assumed a dominant role in work relief activities aimed at fighting the depression by providing federal jobs for the unemployed. WPA projects encompassed a wide spectrum of tasks whose usefulness ranged from fleeting to long-lasting. WPA project that have been a tremendous help to genealogists are the indexes to census schedules and immigration records.

The 1900 census was the first WPA census indexing project. On January 26, 1935, William L. Austin, director of the census, outlined seven projects that might be undertaken with "[a]llotments from the $4,000,000 appropriation now before Congress for public relief and public works." 2 Number seven was the "Card Index of Population by Families in 1900." Austin believed the index would prove necessary if Congress passed legislation for a federal system of old age annuities and unemployment insurance. For many eligible for old-age benefits, "population census records provide the only acceptable evidence of place and date of birth, since dates of birth in most cases, and for some years to come, will antedate the establishment of birth registration." 3 An index would speed up the search process.

Reference demands had already grown so rapidly that the bureau was "three months behind in current searches, and . . . getting progressively farther behind." 4 The bureau submitted its application on June 15, 1935, and it was approved by mid-July.

The bureau then sought office space in St. Louis and found it in the "Old Custom House and Court House" at Eighth and Olive Streets. The bureau opened an office on Monday, September 15, 1935, in "one of the smaller court rooms in the building" and then began indexing operations in mid-October. 5

Nearly a score of permanent bureau employees formed the core supervisory staff. Gerald Ryan was administrative officer and project manager, and Thomas A. Devor was chief clerk. There were eighteen supervisory personnel, of which thirteen later worked on the 1920 project. 6 Some 2,865 persons were employed. 7

About May 1936, the bureau began considering how the index would be arranged before microfilming. 13 On June 17, 1936, Dr. Timothy F. Murphy, the bureau's chief statistician, noted that "the problem of determining the best system of indexing the cards . . . is a most difficult one, due to the size of the index, the large number of foreign names and the variation in spelling by the enumerators of many common names." Murphy recommended that the Census Bureau consider offering the Globe-Wernicke Company, Remington Rand Company, and the Shaw-Walker Company an opportunity to demonstrate their indexing systems. Globe-Wernicke Company's system was a straight alphabetical index; Remington Rand Company had several systems including the "Automatic" and the Russell Soundex methods; and the Shaw-Walker Company had "a different system," which Murphy did not describe. 14On June 18, 1936, Austin selected Dr. Vergil D. Reed (Assistant Director), Oliver C. Short (Executive Assistant to the Director), and Dr. Timothy F. Murphy (Chief Statistician), to recommend an arrangement system. 15 After studying the three companies' demonstrations, these men recommended the Remington Rand Company's Soundex system. When Devor learned that the bureau had chosen the Soundex method, he wrote to the bureau's chief clerk, Arthur J. Hirsch:

Why in the name of Heaven this contract was ever awarded to the Soundex people by the Bureau authorities is more than I can understand. . . . All this foolishness about putting every one of these thirty million cards through an elaborate numerical coding system is pure bunk. It certainly can add nothing whatever to the efficiency of the system. . . . I think it is positively absurd that intelligent people . . . consider a system that requires constant training and which may be made obsolete at any time by the whim of the inventor. . . . It looks to me as if someone has simply been taken up with a new toy. . . . Get after Austin and tell him to cut it out. 16

In response, Hirsch reported that Austin said "he was not going to change his order and that you [Devor] and I [Hirsch] were too old to understand anything new." 17

Col. Brehon Somervell, administrator of the WPA in New York City, wrote to the census director on September 27, 1937, that the New York WPA "would be happy to consider an application for an indexing project." 19 After Somervell pitched his proposal to the secretary of commerce, the secretary sounded out President Roosevelt on Nov. 22, 1937, and "the President . . . specifically indicated . . . this project was worthwhile and should be approved." 20 The project proposal estimated the cost at $2,250,000 and would take 3,535,662 hours of work. 21

Gerald Ryan was placed in charge of the 1920 project with Thomas A. Devor again as chief clerk. 22 The administrative supervisory structure was described as follows:

We were asked to furnish for the work population records of the 1920 Census and also the same small supervisory force we had used on the 1900 card indexing project at St. Louis. We agreed to give to the general supervision of the project eighteen employees, thirteen of whom come from our civil service rolls. . . . Only one of the eighteen we are sending to New York is to be retained on our pay rolls, and this one is Mr. Gerald Ryan who is in charge of the New York project and who is responsible for the safe keeping of our records. 23

On July 28, 1938, Col. Richard C. Patterson, Jr., assistant secretary of commerce, made an inspection tour of the 1920 indexing project. 29 Director Austin wrote that Patterson "knows . . . that you [Ryan] and Devor are doing a better job in New York than you did in St. Louis, and both the projects are considered the model jobs for the WPA in the United States." 30

Ryan was administrative officer until April 1939, followed by Walter B. Carter, who headed the project until he was succeeded by Henry F. Stewart in March 1940. 31

As the completion of the 1920 project drew near, the bureau considered indexing the 1880 census. At the same time, because the New York WPA census projects staff had become experienced in various census research activities, other projects were proposed to piggyback the 1880 project for administrative and funding purposes. 38

Director Austin appointed a committee chaired by Assistant Director Vergil D. Reed to study proposed WPA census projects. On December 1, 1939, Reed's committee made a lukewarm recommendation that an 1880 census index be undertaken, noting that "the results of this indexing will only serve our purposes for a relatively few years" and "will not contribute much to attaining the long-range objectives of the Bureau." 39 However, the bureau's project application made the expectant results sound more valuable:

This index will be used . . . in the handling of the large volume of requests for age information and verification from various public agencies. This card index will have a definite value both to the bureau . . . and to the general public. It will greatly facilitate the handling of requests for age certification, and will reduce the costs of the individual search. 40

Reed's committee made several specific recommendations, including requiring all employees be required to pass "an examination in penmanship and in reading handwritten material." The last recommendation noted that the original agreement between the bureau and the WPA administrator for New York, dated February 6, 1938, had required that "all clerks must qualify" for the work, but in the intervening time, Mr. Carter had been compelled to accept anyone sent to him. 41

Age verification applications continued to grow dramatically due to Social Security, national defense needs, passport applications, and other reasons from 97,000 during the 1937 fiscal year to 216,000 during the 1940 fiscal year. From January to April 1941 alone, the Census Bureau received more than 120,000 requests. 45 Dr. Timothy F. Murphy, chief statistician for the bureau, noted that the cost of furnishing the information from the 1930 census was $2.50 per application. To make a search in the 1920 index cost about $ .54 and, he estimated, if the 1930 census were Soundexed, an application could be answered for much less. 46

The bureau's April 1941 application to index the 1930 census estimated that it would cost $4,525,277, and take 6,773,140 hours of work. 47 Despite the application, indexing may not have been undertaken during the WPA era. The New York WPA did age verification searches until September 1, 1942, when its personnel were reassigned to the bureau's remaining research projects. 48

The declining interest in WPA projects was reflected in the rapid turnover in the bureau's supervisors there from 1940 to 1943: Henry F. Stewart, 49 Elliott M. Murphy, 50 and finally Walter B. Carter, who remained with the project until its completion. 51 All New York City WPA census projects were terminated Friday, March 12, 1943. 52

The WPA census indexing projects remain a vital source of access to the 1880 through 1920 censuses.

Claire Prechtel-Kluskens is a microfilm projects archivist at the National Archives and Records Administration specializing in records of high genealogical value.

1. All persons mentioned in footnotes were Bureau of the Census employees unless otherwise specified in the footnote or main text. All records mentioned are from Record Group 29, Records of the Bureau of the Census, unless otherwise specified. Series 142 is "General Records Maintained by William Lane Austin, 1933–41," who was census director during the time these projects were undertaken. Series 149 is "Miscellaneous Records, 1900–53," kept by the Office of the Chief Clerk, later the Administrative Service Division. Series 192 is "Annual Reports, 1899–1949." UD series 9 is "Work Projects Administration Projects Proposed to the Census Bureau, 1936–39." UD means "undescribed in any inventory."

13. Devor to Hirsch, Aug. 25, 1936, folder 25-11, file 353, series 149. Devor writes: "We have been delayed here since early in May . . . because the Bureau in Washington has been fooling around trying to find something that was better than a simple, straight alphabetical index."

38. Memorandum, Austin to Dr. Reed, Nov. 22, 1939. See also memorandum, "Committee" to the Director, Dec. 1, 1939. The piggybacked studies were Dr. Dedrick's fertility study and Dr. Truesdale's reliability studies. The reliability study would compile the age, race, nativity, and other basic characteristics of a small sample population as reported on the 1900 through 1930 or 1940 censuses, inclusive. Onondaga County, NY, was chosen for this purpose. See also Somervell to Austin, Apr. 10, 1940; all of these records in folder 26-14, file 362, series 149.