Join Us for “A Day in the Life” of NARA 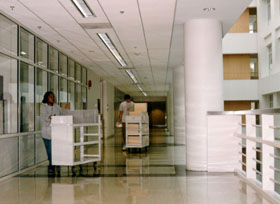 The National Archives at College Park. (Photo by Ken Hawkins)

On September 17, employees all around the country took pictures of the activities in their workplaces in order to document a "day in the life" of the National Archives and Records Administration (NARA).

The result of this effort was literally hundreds of photographs that capture the range of tasks involved in our mission to preserve and provide access to the essential evidence of our government. You can view some of these photos in this issue of Prologue and on our web site at www.archives.gov/about_us/index.html, but I'd like to take this opportunity to give you some more insight into the myriad of activities, both large and small, that made up this particular day at NARA.

September 17 was Constitution Day, marking the 215th anniversary of the signing of this document that lays out the framework of our democracy. On past Constitution Days we've had visitors lined up to get a glimpse of the Constitution, but on this day the Rotunda was empty except for the construction workers engaged in renovation work on the National Archives Building.

As I write this, the pages of the Constitution are undergoing some necessary conservation work so that future generations will be able to see them. When this work is completed, all four pages of the document will be sealed in new, state-of-the-art encasements designed to protect them in the best way possible. Then on Constitution Day next year, the Constitution, along with the Declaration of Independence and the Bill of Rights, which are also now undergoing conservation work, will be returned to permanent public display.

But even as the Constitution is being readied for next year, Constitution Day was observed all around the country. On the morning of September 17, I was honored to join President George W. Bush, author David McCullough, and other national leaders in the Rose Garden of the White House as the President announced a nationwide civics initiative in which NARA will play a key role. The name of this project is Our Documents: A National Initiative on American History, Civics, and Service, and it is a collaboration among NARA, National History Day, the Corporation for National and Community Service, and the USA Freedom Corps.

The purpose of Our Documents is to encourage all Americans to examine for themselves the rights and responsibilities of citizens in our democracy. Our hope is that such an exploration of our nation's civic legacy will encourage students, teachers, and the general public to strengthen their understanding and appreciation of the records and values that undergird our democracy.

Our Documents revolves around one hundred milestone documents drawn primarily from NARA's holdings, which are featured on the project web site: www.ourdocuments.gov. Each week throughout the school year, three new documents will be featured, and next year we plan to conduct a national vote, asking citizens to name ten milestone documents that they feel are the most important to our nation. I am proud that NARA is a partner in this education initiative, and I invite you all to take a look at the web site.

Constitution Day was commemorated outside Washington, D.C., as well, as many of our presidential libraries held special events. For example, the John F. Kennedy Library in Boston welcomed more than two hundred new American citizens who pledged to "protect and defend" the Constitution in a naturalization ceremony. And children visiting the Ronald Reagan Library in Simi Valley, California, were invited to sign their names to facsimiles of the Constitution. In Philadelphia, NARA regional leaders convened just blocks from Independence Hall to plan for the upcoming year, and later that evening we met area business, political, and cultural leaders at a Constitution Day reception.

Of course, besides being Constitution Day, September 17 was a normal workday at NARA as well, and a very busy one at that.

At the National Archives in College Park, Maryland, staff members working to develop the Electronic Records Archives (ERA) planned a user conference to solicit comments and advice on our plans to build an archives that will preserve U.S. Government records of continuing value and make them available electronically to anyone, at any time, in any place, for as long as needed. We are seeking the input and feedback of archivists, librarians, historians, and federal agency staff, as well as from the general public.

Also in College Park, staff members working on the Archival Research Catalog (ARC) met to troubleshoot the system after its public debut the day before. ARC is the more robust version of our prototype catalog, the NARA Archival Information Locator (NAIL). ARC will allow you to do more sophisticated research on our holdings before you ever step foot in one of our facilities. Descriptions of records now link to descriptions of their creators, and you can view the hierarchies of both the records creators and the records themselves. We are also asserting authority control over subject headings, which will improve your search results.

All across the country NARA employees completed the day-to-day tasks that keep our agency running and allow us to serve our customers— the American public. Staffers assisted researchers in locating information, welcomed visitors to the Presidential libraries, painstakingly preserved historic documents, and patiently responded to hundreds of requests for specific records. They filled the requests of veterans for copies of their service records, and they helped to research family trees. They cataloged gifts given to former Presidents, listened to audiotapes of voices from the past, and shelved and reshelved countless records. They typed memos, maintained web sites, and created exhibits. They taught schoolchildren and adults alike the legacy of the Americans that came before us. All in all, September 17 was a day well spent.

As I went through my own day, from the morning White House announcement, to a meeting with potential underwriters of the new National Archives Experience due to debut in the summer of 2004, to a planning session with our regional administrators, to the evening reception in Philadelphia, I was struck by both the volume and diversity of our work.

Although Constitution Day is particularly special to us, the pictures from that day highlight the often ordinary but important work we do everyday. On our web site you will find just a few of the pictures that show our day as an agency. I hope you enjoy this "behind the scenes" look at the people and places of the National Archives and Records Administration.