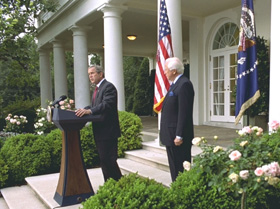 The National Archives and Records Administration is playing a central role in a Bush administration initiative to improve the civic literacy of Americans.

One hundred milestone documents in American history—drawn largely from NARA's nationwide holdings—have been selected as the focal points for the project, called Our Documents.

The Our Documents project is one of three elements in President George W. Bush's Teaching American History and Civic Education Initiative. It is co-sponsored by NARA, National History Day, USA Freedom Corps, and the Corporation for National Community Service.

"To properly understand and love our country, we must know our country's history," Bush said in a Rose Garden ceremony announcing the initiative on September 17. "The federal government conserves and protects some of our greatest national treasures, and we need to make them more readily available to Americans in their schools and local communities."

The Archivist of the United States, John W. Carlin, applauded the initiative. "I am very proud that the National Archives can be a part of this important initiative. I believe that this program will encourage every American to engage in a dialogue about what it means to be a citizen," he said. "To understand the foundations on which our nation is built is crucial to participating in our democracy in a meaningful way."

The purpose of Our Documents is to encourage all Americans to participate in a series of events and programs to get them thinking, talking, and teaching about the rights and responsibilities of citizens in our democracy.

"Our hope is that such an exploration of our nation's civic legacy will encourage students, teachers, and the general public to strengthen their understanding and appreciation of the records and values that undergird our democracy," Carlin said.

Our Documents centers on documents (see list of documents) that have had a major impact on the nation and the lives of Americans. The complete list is also on the project's web site, www.ourdocuments.gov. Each week throughout the school year, high-resolution images of three new documents will be added to the site, along with brief explanations, a discussion of key themes in the documents, and lesson plans and classroom exercises for teachers.

Examining the history of our own time presents special difficulties. The historian ordinarily has the benefit of hindsight but never less so than in examining the last few decades. Furthermore, the closer we approach the present, the less likely it is that historians will be able to transcend their own biases. Historians can never attain complete objectivity, but they tend to fall shortest of the goal when they deal with current or very recent events.

The list of one hundred documents begins with Richard Henry Lee's resolution, which proposed independence for the American colonies and which the Second Continental Congress approved July 2, 1776, setting in motion the adoption of the Declaration of Independence on July 4. The list ends with the Voting Rights Act of 1965, which outlawed discriminatory voting practices that were still being used in some southern states.

The other milestone documents are among the thousands of public laws, Supreme Court decisions, inaugural speeches, treaties, Constitutional amendments, letters, speeches, executive orders, and patents that have influenced, and in some cases changed, the course of American history.

Check for the Purchase of Alaska (1868). (Records of the Accounting Officers of the Department of the Treasury, RG 217)

The list includes well-known documents such as the Declaration of Independence, the Constitution, the Bill of Rights, and the Emancipation Proclamation. But it also includes lesser-known documents such as the Treaty of Guadalupe Hidalgo of 1848, which ended the U.S.-Mexican War and gave the United States 55 percent of Mexico's territory, now the present-day U.S. Southwest; the 1898 de Lome letter, which criticized President William McKinley and generated public support for the Spanish-American War; the Child Labor Act of 1916; and the 1928 Boulder Canyon Project Act, which authorized Hoover Dam and brought water to California's Imperial Valley.

Later next year, there will be a nationwide vote on the ten most significant documents in American history—ones the public feels are the most important in changing the course of history, shaping the nation, and defining Americans as a people. The timing of this part of the program has not yet been set.

"We want everyone— students, teachers, parents, and the general public—to read these milestone documents, consider their meaning, discuss them, and decide which are the most significant and why," Carlin said.

The President also announced two other elements to his history and civics initiative.

A project called We the People, administered by the National Endowment for the Humanities, will encourage the teaching of American history and civics and will provide grants to develop curricula, hold training seminars for teachers, sponsor a lecture series focused on telling the stories of great figures in U.S. history, and enlist high school students in a national essay contest about the principles and ideals of America.

The final initiative will be a White House forum on American history, civics and service, which will convene early next year.