The Stone Engraving: Icon of the Declaration

When Americans think of the Declaration of Independence, they invariably summon up an image of a crisp, cursive text in black ink, with the big, bold signature of John Hancock centered at the bottom, surrounded by those of the other patriots who unanimously approved the Declaration.

But the original parchment Declaration with all the signatures, displayed in the Rotunda of the National Archives Building, is a subdued study in pale brown ink on off-white parchment. Its pale text and signatures are hard to read.

The image familiar to most Americans is the engraving of the Declaration printed by William J. Stone in 1823. Stone's engraving is the image most illustrated in history books, displayed in schools and libraries, sold as souvenirs, and reproduced countless times.

The story of how Stone came to make this icon of American democracy is intriguing.

After the War of 1812, there was a resurgence of patriotism. The events of 1776 were more than thirty-five years past. The signers were aging, and many had died. Americans had begun to revere the parchment document that signaled the birth of the American nation.

Two entrepreneurs, John Binns and Benjamin Owen Tyler, each saw a market for large prints of the Declaration. They entered into a bitter competition to be the first to publish and sell monumental prints with the official text of the Declaration. Each publisher pressed for attestation that his version was correct and true from the State Department, which had custody of the original Declaration at that time.

Tyler, in his bid to get the upper hand, pressed Richard Rush, the acting secretary of state and son of signer Benjamin Rush, to compare Tyler's proof text to the original entrusted to his care and to certify its exactitude. Rush did so, noting the effects "of the hand of time" on the original Declaration. Rush's facsimile certification, reproduced on the Tyler engraving, is the first documented condition report on the Declaration.

A year later, Binns published his engraving with a facsimile note at the bottom from John Quincy Adams, secretary of state and son of signer John Adams, dated April 1819, stating, "I certify, that this is a CORRECT copy of the original Declaration of Independence. . . ."

The competition and politicking of Binns and Tyler very likely influenced Adams to take action. About 1820, Adams commissioned Washington engraver William Stone to produce a facsimile of the Declaration text and signatures. Stone completed engraving the copperplate in June 1823 and sold it to the State Department, which had 200 copies printed on parchment. A congressional resolution of May 26, 1824, passed after the prints had been completed, specified the distribution of the 200 engravings to official repositories, significant officeholders, and the surviving signers of the Declaration, including Thomas Jefferson and John Adams.

Many have questioned how Stone made an engraving that captured such an exact image of the parchment original of the Declaration. A Washington newspaper report from 1823 noted that Stone labored for three years to complete the engraving but gave no description of his method. With no contemporaneous account, there is no way to know for sure. Possible methods included tracing by hand or with a tracing device, or press copying.

A press copy was made by moistening an ink original and pressing the original against paper to transfer an ink offset, a technique then used to create file copies of letters. In 1881, a National Academy of Sciences committee asserted that the poor condition of the Declaration was the result of a wet copy technique, but there is no way to confirm the claim.

Other possible methods included tracing by hand, tracing using a mechanical tracing device, such as a polygraph or pantograph, or tracing using a camera obscura (literally a darkened chamber), in which an image projected through a pinhole is traced onto a surface. Such tracings had been done for centuries, and American artists used the pantograph in the 1700s to trace portrait silhouettes.

Unlike the Binns and Tyler prints, the Stone engraving shows both the text and the signatures in facsimile, very close in appearance to the original. The most recognizable feature of the Stone engraving is its large size, close to the size of the parchment original, which measures about 24 by 30 inches. Another characteristic is that the State Department had Stone's engraving printed on parchment, a specially prepared animal skin that is thicker than paper. Finally, the 1823 printing included a line at the top that it was printed at the order of Adams: "Engraved by W.I. STONE for the Dept. of State by order/ of J.Q. ADAMS Secy of State July 4th 1823."

After the 1823 printing, the imprint line was burnished off the top of the copperplate, and a new imprint added at the bottom left, below the first column of signatures: "W.J. STONE SC. WASHN." Later printings from the Stone copperplate are the same large size, but printed on paper rather than parchment. Because parchment expands much more than paper when dampened for printing and shrinks more when it dries, the platemark dimensions of the engraving will vary when printed on parchment rather than on paper and can be about an inch or so smaller than the dimensions of the copperplate, which measures 25 by 30 inches. In comparison, most souvenirs and reproductions are much smaller and printed on a thin paper rather than on true parchment. The Binns and Tyler prints are rarely reproduced today, but they can be readily distinguished because they are not facsimiles of the original text.

The Tyler engraving of 1818 showed the text of the Declaration with the initial lines of text formed in a decorative arched heading, and a number of phrases in bold lettering different from the remainder of the text. While the Tyler engraving text was not in facsimile, the signatures below were full-size facsimiles in the arrangement seen on the original document.

The Binns engraving, published in 1819, had the text reduced in size and featured full-size facsimile signatures, rearranged to fit inside the oval border that surrounded the text. The border had circular medallion portraits of George Washington, John Hancock, and Thomas Jefferson at the top and official seals of the thirteen original states in circular medallions around the lower half.

The Stone copperplate is preserved in the records of the Department of State at the National Archives. When examined in raking light, the copperplate at the top left and right remains slightly uneven at the top left and right where the former imprint line was burnished out of the metal. The imprint line added later, with Stone's middle initial given as "J" instead of "I," is visible engraved at the bottom corner. The exact year of the alteration of the plate imprint lines is not clear, but it is likely to have occurred soon after the 1823 printing. On the reverse at top and bottom are marks of the copperplate maker: "JB. KEIM /PHILA".

Of the original two hundred prints on parchment, fewer than three dozen have been located. In 1888, Mrs. Elizabeth J. Stone, Stone's elderly widow, donated his personal impression on parchment to the Smithsonian Institution. The print that the State Department sent to General Lafayette is at the University of Virginia in the Albert H. Small Collection.

The Stone copperplate will be displayed as part of the Public Vaults of the National Archives Experience exhibition, beginning in the fall of 2004. An impression made from it in 1976 will rest beside the copperplate in its specially designed case to show America's icon to the public once again.

Catherine Nicholson is supervisory conservator in the Document Conservation Laboratory. She has an M.S. in Conservation from the University of Delaware/Winterthur Museum program and has worked as a paper conservator at the National Archives and Records Administration since 1984. 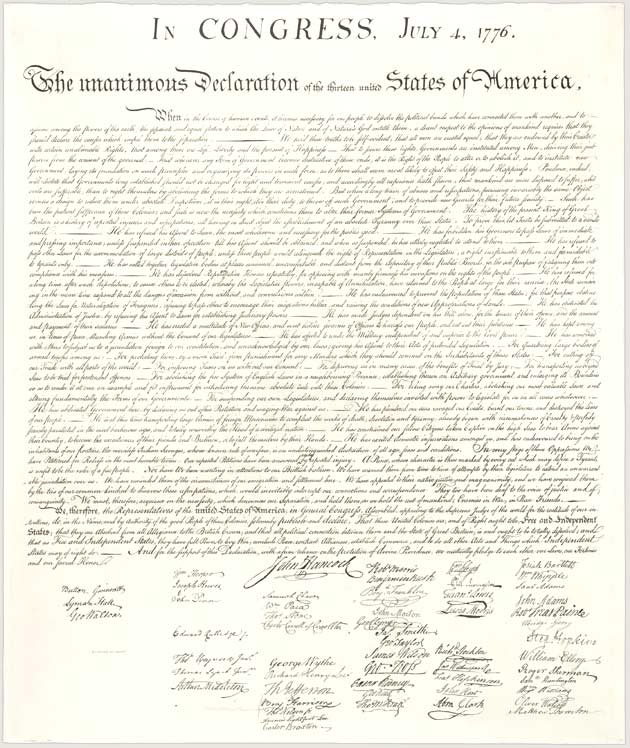 This image of the Declaration of Independence is taken from the engraving made by printer William J. Stone in 1823 and is the most frequently reproduced version of the document.