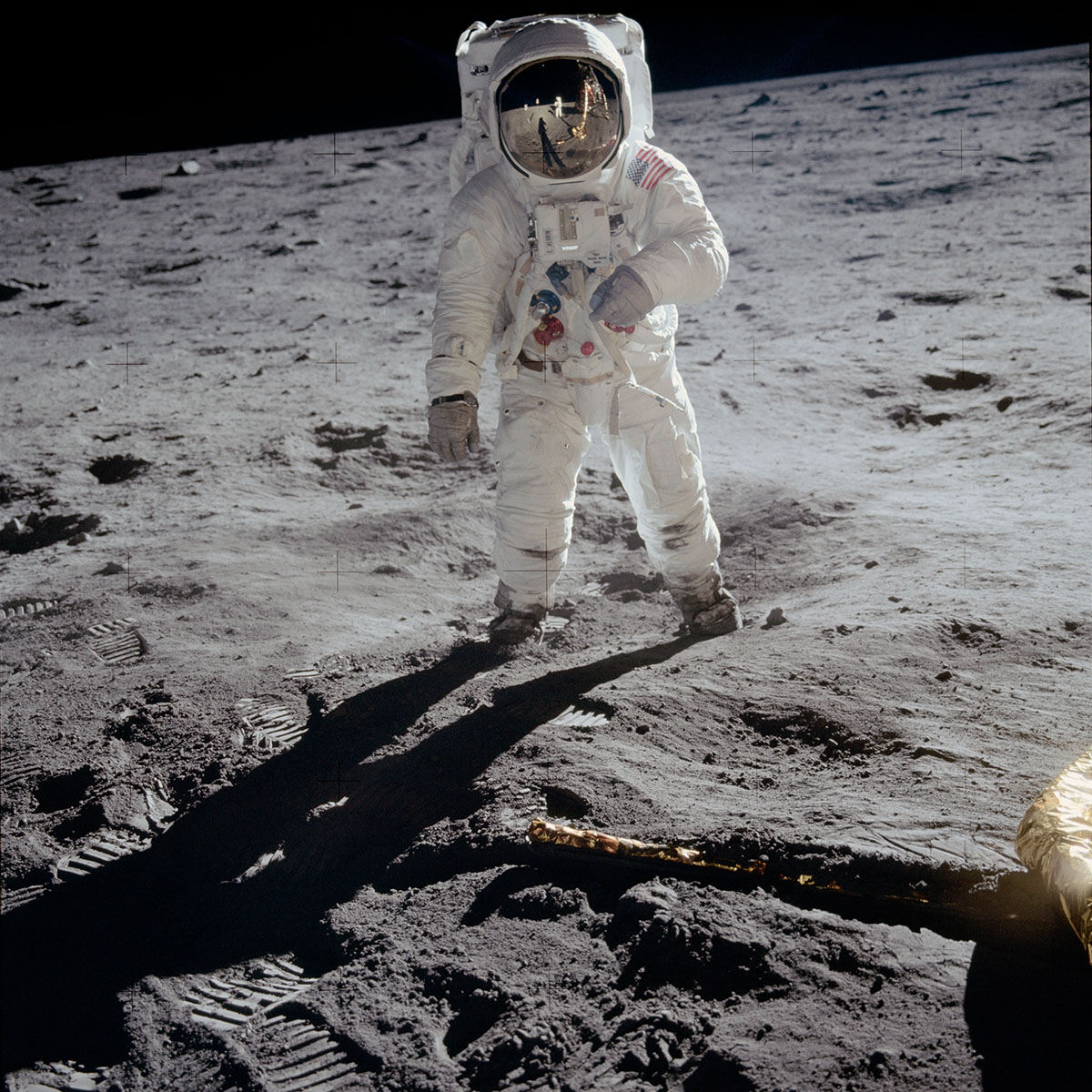 "That's one small step for man, one giant leap for all mankind."
— Astronaut Neil Armstrong's words as he made his first step onto the surface of the Moon
July 20, 1969

What would it be like if we could recreate a single day in our past? Not just the parts we remember, the events to which we attribute great significance, but the whole day filled with all its interacting parts. This is the premise behind one of the new exhibits under development for the National Archives Experience, "20 July 1969." Millions of Americans—and millions of others around the globe—remember the summer of 1969 as the time humans first landed on the Moon. Culminating with Apollo 11 astronaut Neil Armstrong's first step onto the Moon on July 20, 1969, the space flight, the lunar landing, and the crew's safe return to earth were seen as epochal events, worthy of intense media coverage, international celebration, and careful social analysis. The events surrounding the Moon mission were recorded and noted in great detail. Nowhere was this truer than in the many agencies that make up the federal government of the United States. "20 July 1969" will show how this momentous episode in American history affected the work of the entire government and how the world reacted to Armstrong's "giant leap for all mankind." Using original documents, photographs, and video clips set in an environment reminiscent of a NASA "mission control" station, the exhibit will recreate this one historic day in the nation's history.

On the morning of July 16, 1969, an enormous three-stage Saturn V rocket—the largest rocket ever built—stood on launch pad 39A at Cape Kennedy, Florida. The Saturn V stood 281 feet high and weighed 6.2 million pounds. Its first-stage liquid fuel engines produced 7.5 millions pounds of thrust—enough power to light up all of New York City for an hour and a half. On top of the Saturn V, three Apollo 11 astronauts—Neil Armstrong, Michael Collins, and Edwin "Buzz" Aldrin— waited in their tiny "Command Module," over three hundred feet above the ground. Attached below them were a "Service Module," whose engine would be used to take them out of Earth orbit, and a "Lunar Module," named Eagle, which would be used to take Armstrong and Aldrin to the surface of the Moon and back to Collins, who would orbit the Moon in the Command Module, for the trip home. At just after 9:30 A.M., the long countdown ended, and the Saturn rocket's engines ignited. The huge rocket rose off the ground. In minutes, the crew was in Earth orbit. Shortly afterward, the single booster in the Service Module launched them out of orbit and toward the Moon. For the next eight days, the world watched as Apollo 11 flew to the Moon, Armstrong and Aldrin landed and explored its surface, linked up with Collins, and returned to Earth. While they were away, much of the federal government focused on their voyage.

The National Aeronautics and Space Administration (NASA), which ran the mission, was of course fully devoted to Apollo 11. But other agencies integrated the Moon landings into their work as well. The White House planned for "Presidential Activities" related to the mission. The State Department accepted the best wishes and congratulations of foreign governments. The United States Information Agency, which was responsible for keeping foreign populations informed of the progress of the flight, sponsored public television viewings of mission events for citizens of other countries at American cultural centers. The U.S. Navy rehearsed its role in the successful recovery of the spacecraft at sea. Congress considered how to honor the nation's newest heroes.

Documents from the National Archives record the history of Apollo 11 and the world's reaction to it. A NASA "Data Card Kit," for example, provides a record of the astronauts' activities on the lunar surface. These cards detailed the procedures followed during Armstrong and Aldrin's "extra vehicular activity" (EVA) on the Moon such as photography, inspecting equipment, and collecting samples of lunar soil. A similar checklist describes the countdown for the crucial "TLI" (Translunar Injection), which would fire the rocket on the third stage of the Saturn and accelerate the astronauts out of Earth orbit. The backside of a photography checklist, labeled "Ye Ole Lunar Scratch Pad," strikes a more whimsical note. These pads gave the astronauts space to write notes with grease pencils that had been sewn onto their uniforms. All the checklists have small squares of Velcro that could be attached to other Velcro squares on space suits or in the crew compartments.

Among military records in the National Archives, the log book for the aircraft carrier USS Hornet chronicles the ship's preparation for Apollo 11's Pacific Ocean landing and its role in recovering the astronauts and their spacecraft. On July 20 the Hornet's officer of the deck, Lt. (jg) J. S. Lauck, noted only briefly that the "Apollo Eleven Lunar Module has landed safely on the Moon." Four days later, Lt. W. M. Wasson's more detailed entry describes the launch of aircraft used in the recovery operations, the landing of "R. M. Nixon, President of the United States," the "splash-down" of the Command Module, and the safe recovery of "N. A. Armstrong, LCOL M. Collins, USAF, and Col. E. E. Aldrin, Jr., USAF."

Thousands of miles away, near Hue, South Vietnam—where July 20 was already July 21—the men of another military unit, the Second Brigade of the U.S. Army's 101st Airborne Division, were equally busy. The brigade's Daily Staff Journal describes spotting North Vietnamese soldiers, destroying unexploded rockets, and blowing up enemy bunkers. Nevertheless, despite the pressures of war, Capt. David T. Gibson still found time to note in the diary, "At 1103 hrs the first man walked on the moon."

When Armstrong took those first few steps away from Eagle, nearly 600 million people watched. The Moon landing was the most watched event in television history; such an unprecedented audience provided unprecedented media opportunities. At the Nixon White House, presidential advisers had been planning for weeks how the chief executive and first lady would respond to Apollo 11. The President would call the astronauts the day before their liftoff, while the first lady would call the astronauts' wives. After a successful Translunar Injection, Nixon would proclaim July 20 a holiday—Moon Day—"allowing all Americans to watch the Astronauts' activity." Once Armstrong and Aldrin were safely on the surface, the President would make the world's first "interplanetary" congratulatory telephone call from the Oval Office, during which he would express his pride in the American space program's achievement. He would also state his belief that the Moon landing had given the world "one priceless moment, in the whole history of man [in which] all the people on this earth are truly one."

For some Americans, simply watching and listening as history was being made was not enough. On July 20, 1969, Americans held "Moon Parties," recorded their thoughts in letters, or took family photographs. Shortly after Thaddeus Zagorewicz and his family watched the momentous events on television, he put his feelings down on paper. "I am," he wrote President Nixon, "a naturalized citizen of this wonderful country and I am proud to be one of You." Watching Americans walk on the Moon and hearing Nixon's conversation with "our national heroes" had moved him deeply. "When we looked at our flag waving on the surface of the moon - my wife and I had tears in our eyes."

Zagorewicz's heartfelt comments, as well as the other records described in this article, will be displayed in "20 July 1969" when the Public Vaults of the National Archives Experience open to the public in Fall 2004 in the newly renovated National Archives Building in Washington, D.C.

Bruce I. Bustard is on NARA's public programs staff and was the curator of "Picturing the Century: One Hundred Years of Photographs from the National Archives." He received his Ph.D. in history from the University of Iowa.