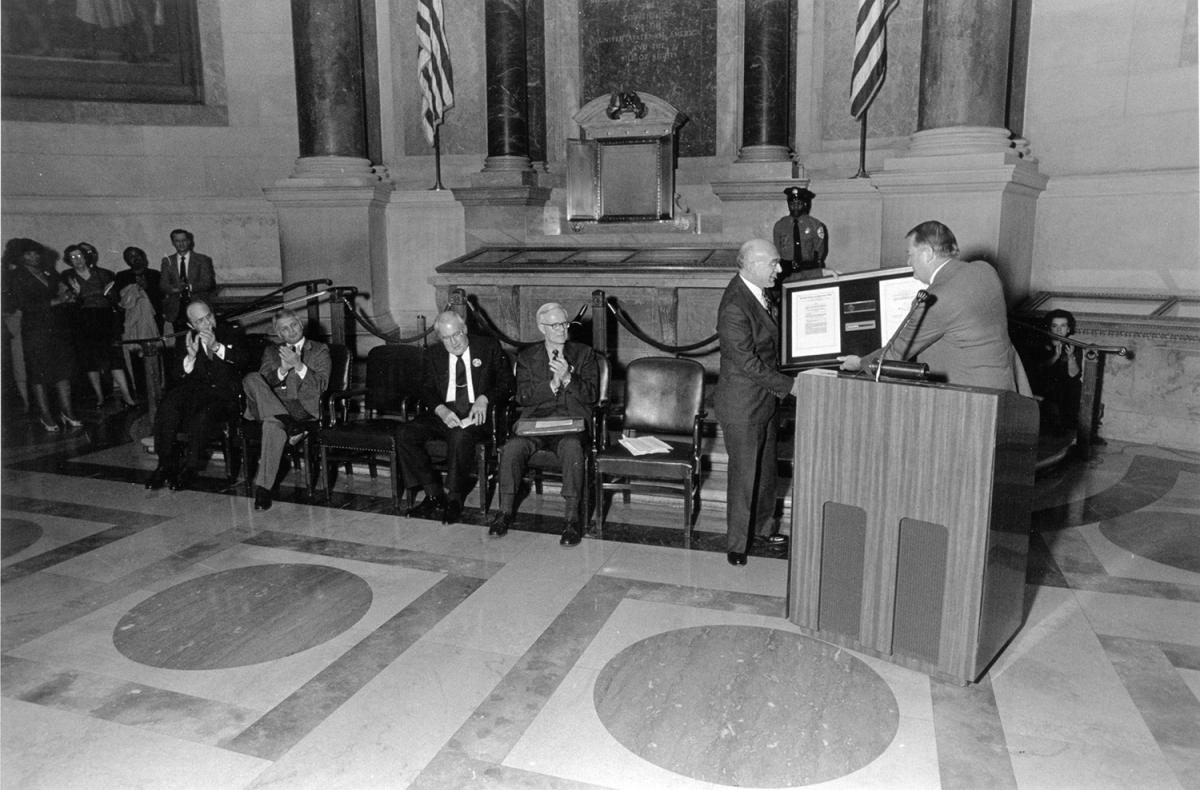 In a ceremony in the Rotunda of the National Archives Building in Washington, D.C., on November 8, 1984, Edwin Meese III (right) presented to Archivist Robert Warner a reproduction of the act creating an independent NARA. Seated from left are George N. Scaboo, deputy archivist; Joseph R. Wright, deputy director of the Office of Management and Budget; Representative Frank Horton of New York; and Dr. Samuel Gammon, executive director of the American Historical Association. (Records of the National Archives, RG 64)

This past June, our country mourned the passing of President Ronald Reagan. In this issue of Prologue, we share with you some images of the tribute to President Reagan that took place at the Reagan Library in Simi Valley, California. Like all presidential libraries, which are administered by the National Archives and Records Administration (NARA), the Reagan Library plays an important role in preserving the records and legacy of the former President and his administration. But President Reagan also played an important and historic role in the history of NARA as an agency.

For on October 19, 1984, President Reagan signed into law legislation reestablishing the National Archives as an independent agency within the executive branch of our government.

"The public papers and other materials that the Archives safeguards are precious and irreplaceable national treasures, and the agency that looks after the historical records of the federal government should be accorded a status that is commensurate with its important responsibilities. Independence for the Archives this year, in which we are commemorating the fiftieth anniversary of its creation, is a particularly fitting step, both practical and symbolic, in achieving that important goal," said Reagan in his statement announcing the enactment.

It was exactly fifty years and three months earlier that President Franklin D. Roosevelt signed the law establishing the National Archives as an independent agency.

It soon became evident that the basic missions of the Archives and GSA were not compatible. While GSA's main focus was on the administration of government buildings and supplies, the Archives' responsibilities center on managing, preserving, and providing access to records of all branches of the U.S. Government. And while GSA was a highly political agency, the Archivist of the United States needed the autonomy to be able to speak out frankly about budget and program issues. Without this independence, our country and our citizens did not have an archival program that was able to operate professionally and in the national interest.

The campaign for National Archives independence was a long one, spanning more than thirty years, but the first legislation proposing that the Archives be a separate executive agency was not introduced in Congress until 1980. Similar bills were introduced each year until the 1983 bill garnered significant bipartisan support on Capitol Hill. At that time, professional organizations such as the American Historical Association, the National Association of Government Archives and Records Administrators, the Coalition to Save Our Documentary Heritage, and the Society of American Archivists took up the cause. They were joined by groups of genealogists, educators, and other professionals who lobbied members of Congress and their staffs, educating them on the importance of the preservation and accessibility of government records. There is no doubt that without this broad base of supporters, the issue of Archives independence would not have gained the attention it needed.

Finally, in early October of 1984 the legislation was passed by both the House and the Senate and sent to the President on October 4. Fifteen days later, on the advice of Edwin Meese, then counselor to the President, Reagan signed the bill into law. 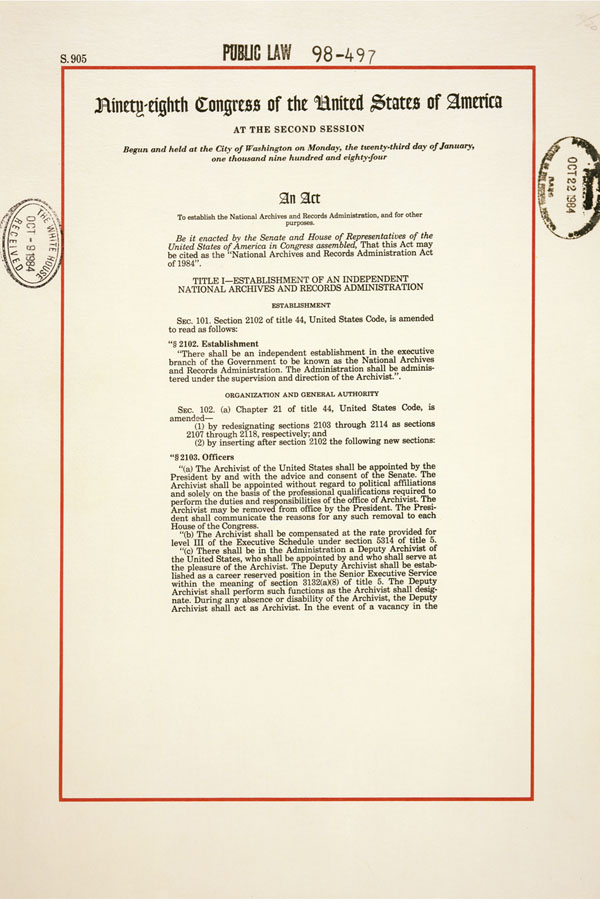 Page 1 and signature page of the National Archives and Records Administration Act of 1984. 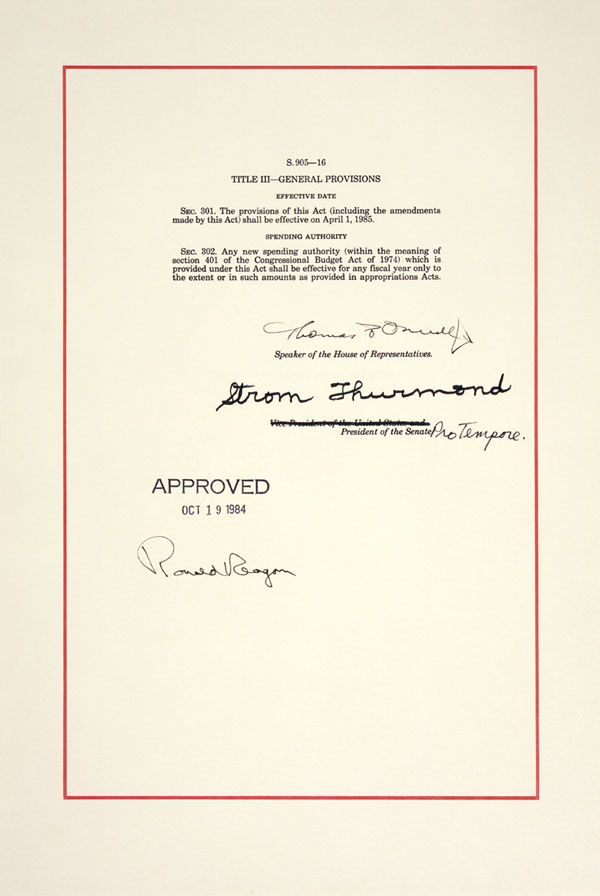 The National Archives and Records Administration Act of 1984 became effective on April 1, 1985, when all archival authorities were transferred from the GSA Administrator to the Archivist of the United States.

"Today is a great day for the National Archives," said Robert M. Warner, then Archivist of the United States. "The proper preservation of the unique and accurate historical records of a nation is an issue of public policy which concerns every citizen. To operate effectively, the national record keeper of any country must have both independence and integrity. This new law will enable the National Archives of the United States to function with the organizational and administrative tools essential to its mission."

There is no doubt that Warner and the many others who fought for NARA's independence changed this agency forever. For the first time in more than thirty-five years, NARA was able to set its own priorities, to justify its budget to Congress, to tell its own story to the American public, and to maintain accountability for its programs.

In the last twenty years, NARA has proven itself to be a vital, invaluable resource within the federal government. And today, thanks to the work of Warner and his supporters, we are able to develop and implement our own strategic plan, which lays out our goals as the nation's record keeper. We work each day to preserve and provide access to the records that document the actions of our government, ensure the rights and entitlements of our citizens, and record our history as a nation. This is a mission that is integral to the democracy in which we live, and it cannot be accomplished under the auspices of a larger federal agency with its own separate mission and priorities.

In signing the legislation giving the National Archives independence in 1984, President Reagan underscored what we at NARA are reminded of daily in our work—that records matter. Whether they are presidential papers, or military service records, or naturalization papers, or electronic files, or constitutional amendments, they must be handled with the greatest of care and integrity.