By Rodney A. Ross 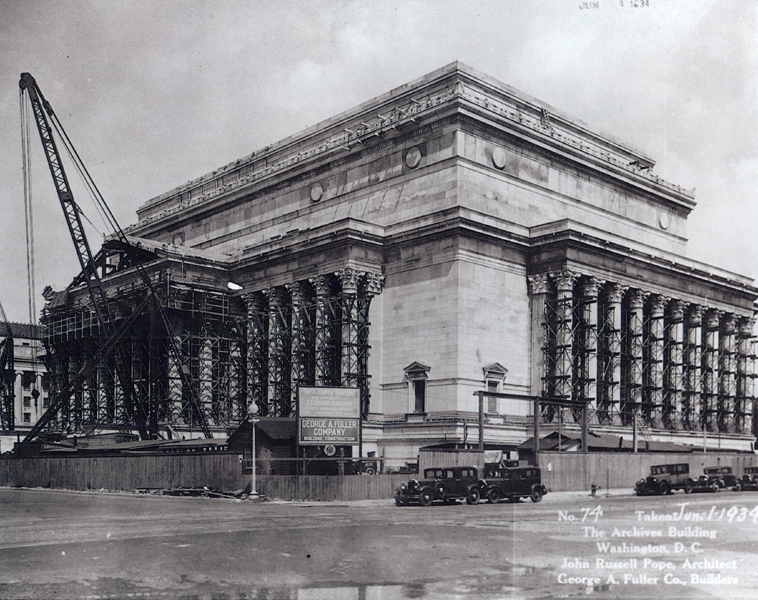 The creation of the National Archives of the United States seventy years ago was almost a classic example of "hurry up and wait."

Since the early nineteenth century, those concerned about the history of our nation had called for a central archives to preserve federal records. Beginning in 1908, J. Franklin Jameson, a prominent historian, directed a campaign that led in 1926 to funding for the construction of the National Archives Building.

By the time legislation creating the agency was introduced on Capitol Hill in spring 1934, the building, located along the National Mall midway between the Capitol and the White House, was well under way.

On February 20, 1933, outgoing President Herbert Hoover had laid the cornerstone for the building, on the northeast corner, just two weeks before he yielded the presidency to Franklin D. Roosevelt.

But Roosevelt, faced with the need for measures to begin pulling the nation out of the Great Depression, didn't put a high priority on legislation creating the agency that would use the building. This isn't to say FDR, who later in his administration would be actively involved in matters archival, especially in relation to his own presidential library, was uninterested. Early in June 1934 FDR had told Senator Alben Barkley of his desire for action on the National Archives bill. 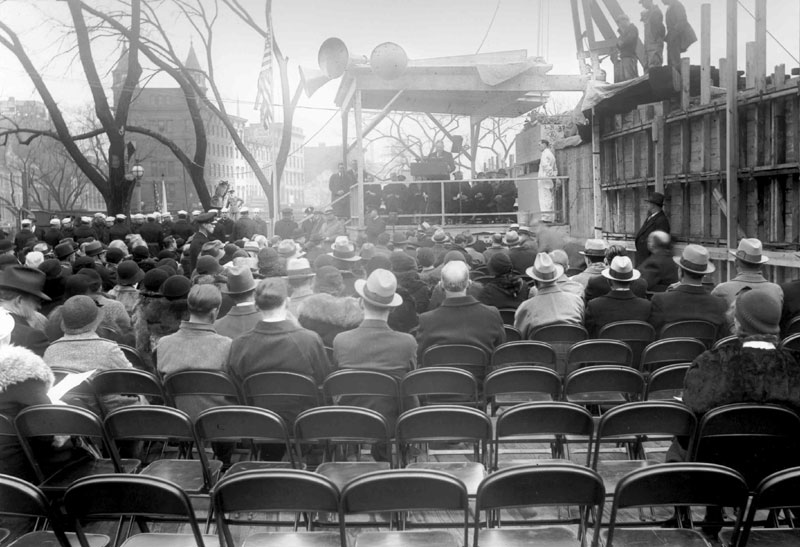 Later that month FDR was pleased to sign into law "An Act to establish a National Archives of the United States Government, and for other purposes." However, even after legislation for an agency had been enacted, FDR waited more than three months before he named as a recess appointment the North Carolina history professor R.D.W. Connor to be the first Archivist of the United States.

The impetus for the June 1934 legislation came from Congress, with Senator Kenneth McKellar and Representative Sol Bloom championing rival bills, S. 3681 and H.R. 8910. Ultimately it was H.R. 8910 that served as the basis for the measure approved by FDR.

In April 1934, when the chair of the House Committee on the Library had submitted a report to the full House advocating passage of H.R. 8910, the report had noted:

The great National Archives Building on Constitution and Pennsylvania Avenues is nearing completion. The interior arrangement of shelf space, equipment, etc., providing for the custody of Government documents, is ready for consideration. Legislation governing the future administration of the national archives and the appointment of an archivist to cooperate with the architects is therefore much to be desired at the present time.

The Senate's own report of March 28, 1934, had added a sense of urgency by stating "it is necessary that this bill be passed at the earliest possible moment."

The bill created the Office of Archivist of the United States, with presidential appointment and Senate confirmation. The salary of the Archivist was to be ten thousand dollars per annum. Persons to staff the "National Archives Establishment" could be appointed by the Archivist "solely with reference to their fitness for their particular duties and without regard to civil-service law," with the provision that employees making five thousand dollars or more be appointed by the President with approval by the Senate. 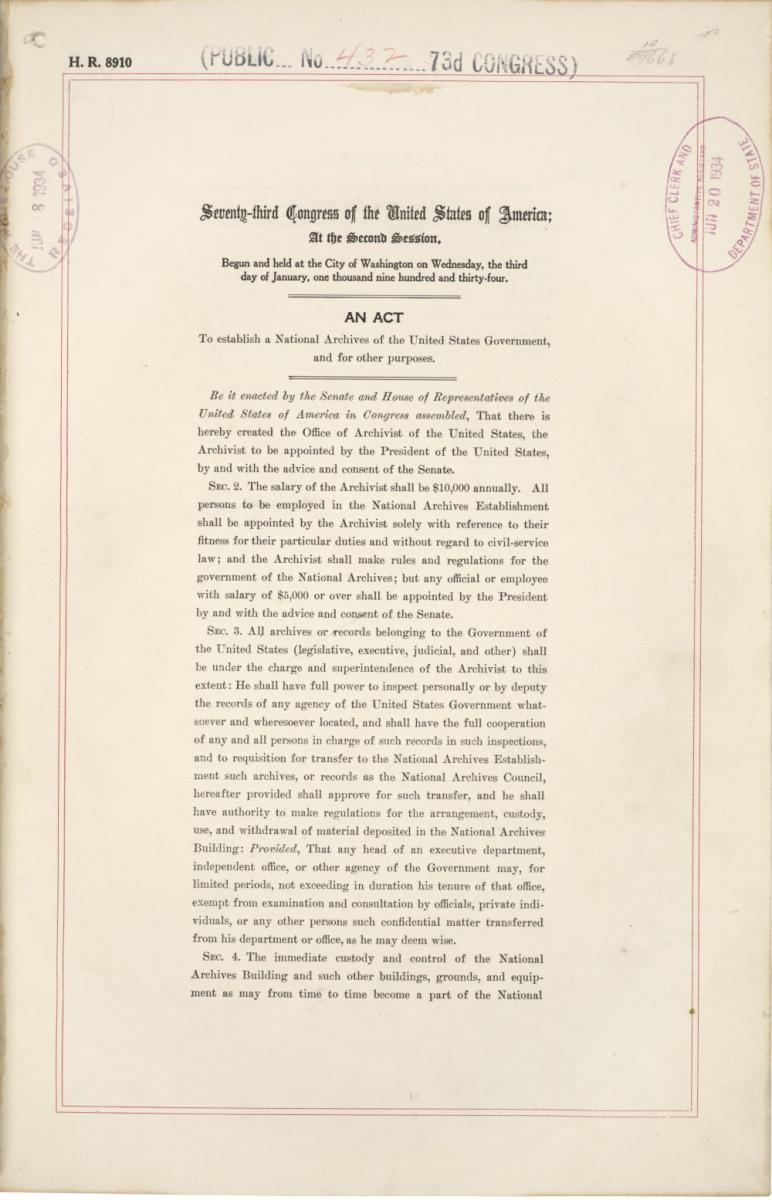 Page 1 of the National Archives Act of 1934. (General Records of the United States Government, RG 11) 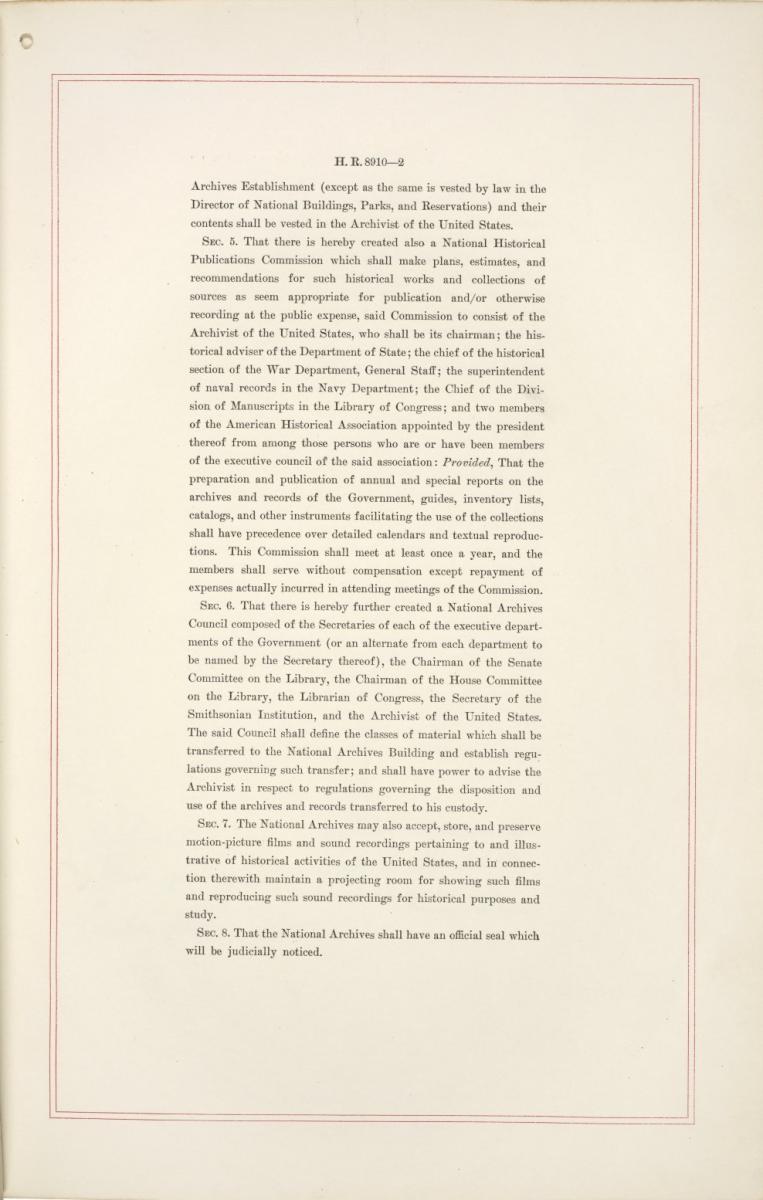 Page 2 of the National Archives Act of 1934. (General Records of the United States Government, RG 11) 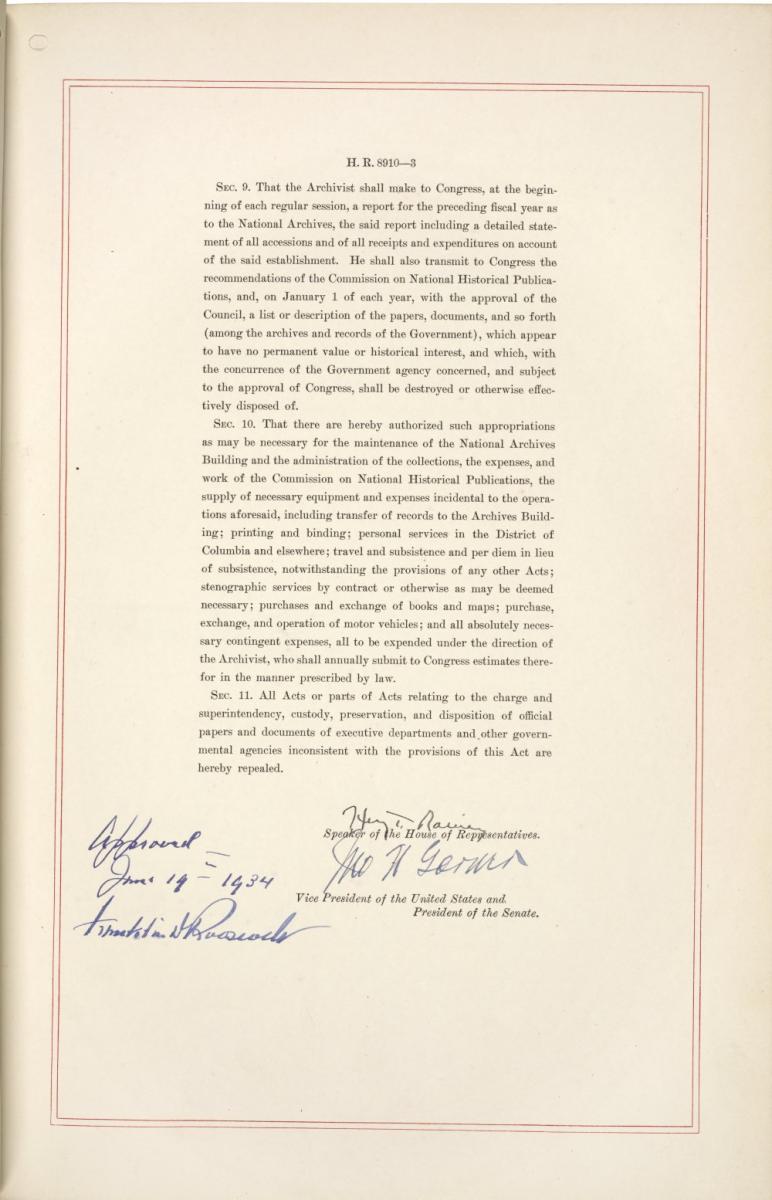 Page 3 of the National Archives Act of 1934. (General Records of the United States Government, RG 11)

"All archives or records" of the U.S. Government, legislative, executive, or judicial "and other" were to be under the charge of the Archivist. The Archivist could inspect materials wherever they might be housed and arrange for their transfer to the National Archives, subject to regulations decreed by the National Archives Council. The council was to be composed of the secretaries of the executive departments, the chairmen of the House and Senate library committees, the Librarian of Congress, the Secretary of the Smithsonian, and the Archivist. (When the National Archives became part of the General Services Administration fifteen years later, the council was abolished.)

The same legislation created a National Historical Publications Commission, gave the National Archives authority to accept motion-picture films and sound recordings illustrative of historical activities of the United States, declared that the National Archives should have an official seal, stated that the Archivist was to make annual reports to Congress and submit lists of records deemed worthy of destruction, and repealed any records-related existing laws inconsistent with the act's provisions.

On the final day of the Seventy-third Congress, the legislature sent to the White House for the President's signature the "enrolled" bill copy, signed by both Speaker of the House Henry T. Rainey and Vice President John N. Garner, in his capacity as president of the Senate.

Upon receiving the legislation, the White House referred it to the director of the Bureau of the Budget for his concurrence. On June 19, 1934, Director Lewis W. Douglas recommended that the measure be approved. Consequently, that very day in black ink on the third page of the enrolled bill, the President wrote: 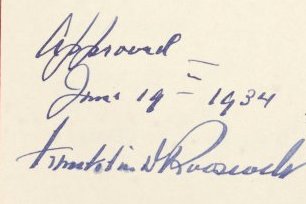