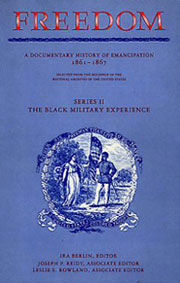 NHPRC grants have assisted the publication of the multivolume Freedom: A Documentary History of Emancipation, 1861–1867, by the Freedmen and Southern Society Project.

Since 1964, the National Historical Publications and Records Commission has awarded grants for projects that publish the American story through multivolume print editions, microfilm collections, compact discs, and on the web. The Commission also funds projects that preserve and make accessible the records of all types that are housed in historical repositories across the nation.

Hundreds of collections have been saved through these efforts, including

The Commission has also funded the works of other figures from the early years of the Republic, including the papers of such leading figures as Benjamin Franklin, Alexander Hamilton, Thomas Jefferson, James Madison, and George Washington.

The works of other figures from the early years of the nation, including Ethan Allen, Aaron Burr, Charles Carroll, John Paul Jones, the Marquis de Lafayette, John Marshall, George Mason, and William Penn were funded. NHPRC also supported projects involving the records of the first federal elections and the early foreign relations of the United States, naval documents of the American Revolution, the expeditions of John C. Frémont, and the journals of Lewis and Clark.

Return to Documenting Democracy at State and Local Levels