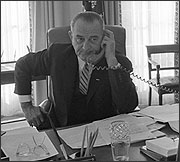 The LBJ telephone tapes reveal Johnson's complex persona as no paper document possibly could. In them we hear the man himself, cajoling, flattering, soothing, blustering, pleading—LBJ had as many stops as a pipe organ, and he used them to create an infinite variety of harmonies to get what he wanted.

One of the things he wanted in early 1964 was an excise tax bill, which was in deep trouble in the Senate. Using the telephone, his favorite instrument, the President went to work.

LBJ (To Senator Abraham Ribicoff): "Abe, Can't you go with us on this excise tax thing and let us get a bill? Goddammit, you need to vote with me once in a while."

LBJ (To Senator Everett Dirksen, Senate Minority Leader): "Now you're not going to beat me on excise taxes and ruin my budget this year. . . . Who are you going to take? You gonna take all your Republicans? Give me one or two of them, and let them be prudent, and you'll see how you're going to let me win by one vote in there . . . ."

Dirksen: "You never talked that way when you were sitting in that front seat" (meaning when LBJ was Majority Leader).

LBJ: "I did if my country was involved. I voted for Ike one time when [Republican Majority Leader William] Knowland voted against him. I cast the vote on his foreign aid bill and brought it out of the committee. . . . Don't you kill my goddam tax bill tomorrow."